The Marine Corps Has A Commercial For A New Era

You haven’t seen a Marine Corps ad like this before. The Marines have a new commercial, created by the iconic... 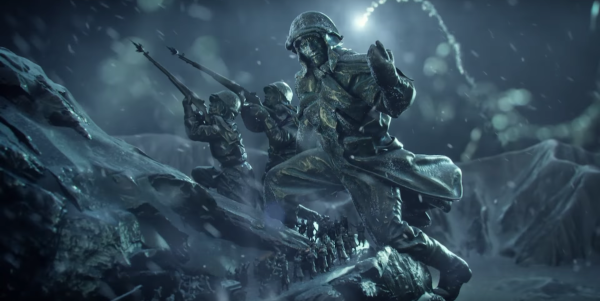 You haven’t seen a Marine Corps ad like this before. The Marines have a new commercial, created by the iconic advertising agency that has long-represented the service — J. Walter Thompson has developed advertising for the Marines for nearly 70 years. The ad brings sculptures of Marines in battle to life, embracing the past legacy as the Corps moves into a pivotal new period.

There’s little debating that this is a new era for the United States Marine Corps. The last generation of Marines was defined by wars in Iraq and Afghanistan that devolved into messy counterinsurgency operations, both lasting over a decade. Now, global terrorism spearheaded by al Qaeda in the Arabian Peninsula and the Islamic State in Iraq and Syria present immediate threats, while Russia and North Korea loom on an impending horizon.

Objectively, it’s a prosperous time for the entire Defense Department. President Donald Trump has proposed a budget with massive increases for the Department of Defense. But as the military’s smallest branch, the Marine Corps is set to receive the most disproportionate benefit.

The Marines are just beginning to unveil the next-generation aircraft Joint Strike Fighter F-35B, which will eventually replace aging fleets of AV-8B Harriers and F/A-18C Super Hornet fighter/ attack aircraft. The Marine Corps first deployed its F-35Bin January, with a mission to Japan to support the U.S. military in the Pacific, where tensions with North Korea are boiling over, and China is behaving aggressively in the South China Sea.

In 2019, the Marine Corps will receive a critical upgrade to its fleet of heavy-lift helicopters.The new CH-53K King Stallion can lift triple what the current iteration can lift (30,000 pounds!) and has an expanded fuselage to give the aircraft unprecedented ability to haul vehicles inside the helicopter.

These platforms will join the MV-22B Osprey, a tilt-rotor aircraft that takes off like an aircraft and lands like a helicopter, and can take Marines further and faster as it puts them into battle. The Ospreyhas proven itself well in recent combat operations across multiple conflict zones.

And so the Marine Corps is set to enter an era where it has never been better equipped as a Marine Air-Ground Task Force. Called a MAGTF, the task force is the main organizing structure of Marine Corps military operations. It’s the cohesive end result of Marine infantry, aircraft elements, and logistic support. With the impending arrival of these new technologies, the Marines will have an unprecedented ability to project power and support the Marines on the ground.

And that’s exactly where the focus for this advertisement lies — on the Marines on the ground. The focus of the ad reminds me of something a Marine lieutenant colonel who I served with in Afghanistan told me shortly after we returned home to North Carolina. He was a Harrier pilot — more specifically, the commanding officer of a Harrier squadron — but the way he described his priorities has always stuck with me.

Which brings us back to this new ad. It’s called “Anthem,” and it’s a high-tech CGI diorama of Marines sculptures. Some scenes, like the flag-raising on Iwo Jima, are of course real sculptures. Others are battle scenes, or scenes of humanitarian work, or boot camp, or instances of female engagement operations in modern theaters of war.

It shows service in the Marine Corps for what I know it to be: intense, diverse, impactful.

It drives from scene to scene as the narrator describes the battles that Marines fight, but also the battle that each Marine fights within his or her self. “Battles aren’t won solely on the field,” the ad says.” That’s a common misconception. Battles are won within.”

In the end, the ad pans out to show that all of the sculptures and all of the scenes culminate in one larger sculpture of a Marine in full combat gear. It’s the embodiment of the notion that all of the history culminates in every Marine, but also of the full range of the missions.

In an interview withAdweek, Marine public affairs chief Gunnery Sgt. Justin Kronenberg rejected the idea that the ad campaign was connected to the new increase in defense spending.

“The Marine Corps is one of the world’s most iconic brands regardless of ebbs and flows in appropriations,” he said, but he did call the ad “a fresh way of explaining who we are and what we do to our target demographic and their influencers.