More than 30 years ago, one of the greatest military science fiction movies of all time hit theaters. “Aliens,” the... 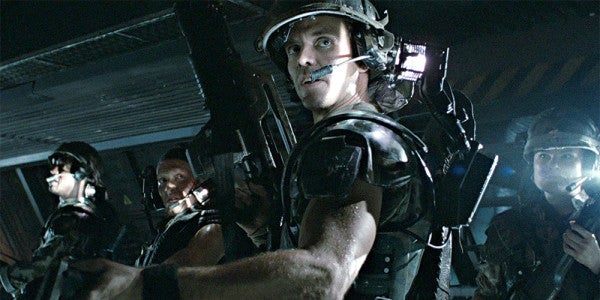 More than 30 years ago, one of the greatest military science fiction movies of all time hit theaters. “Aliens,” the action-packed sequel to the comparatively tame “Alien” forever changed the genre, from Sigourney Weaver’s return as Ripley, who helped transform science fiction’s portrayal of female protagonists, to the size and scope of James Cameron’s vision. And beyond the horrors of the alien horde, “Aliens” introduced us to another deadly force: the Colonial Marines, the crack team of “ultimate badasses,” sent to stop them.

As much as “Aliens” is a critique of militarism and hubris, the Colonial Marines are a driving force behind the film — and a major reason why so many of us are diehard fans years later. Who can forget Cpl. Hicks (Michael Biehn), the seasoned grunt who’d been on so many combat drops he’d sleep on the way into a hot LZ? Or Hudson, played by the late Bill Paxton, whose answer to “any questions?” was to ask “how do I get out of this chicken shit outfit?” For many fans, “Aliens” forged a deep-seated admiration for the salty and belligerent infantrymen who buck protocol, snub their noses at junior officers, and get away with it because they have the balls and brawn to take on anything — even acid spewing xenomorphs who come out of the walls.

For those who love to spout lines about going into battle armed to the teeth with independently targeting particle beam phalanxes, phased plasma pulse rifles, sonic electronic ball breakers, nukes, knives, and sharp sticks, here are seven things you probably didn’t know about one of the best goddamn sci-fi war movies ever made.

1. The futuristic firearms wielded by the Colonial Marines are actually from World War II, among other places.

The iconic and infinitely badass M56A2 Smart Gun was modeled on the MG42, a German machine gun that saw action during World War II, according to Simon Atherton, the film’s armorer, in the documentary “Superior Firepower: The Making of Aliens.” It was mounted on a Steadicam harness and then “disguised” with parts from a 250 Kawasaki motorcycle (take a close look at the pistol grip and note the clutch.)

Similarly, M41A pulse rifle is just a Thompson submachine gun, another WWII staple, with a pump-action shotgun that was cut down to about 15 inches and attached to the bottom of the barrel to function as a grenade launcher. The whole thing was encased in plastic, given an olive-drab paint job, and voila: now you’ve got a xeno-slaying doom rifle.

2. Since the actors were going to play space Marines, they had to train like them.

Over the course of a few weeks, the actors who played the Colonial Marines were put through the paces by military advisors. They went through drills and maneuvers, assaulted stairwells around the studio, learned to salute, wear their uniforms properly, and handle their weapons appropriately.

“We had a physical fitness routine for them from 8:30 in the morning until 5 o’clock at night, and they were running, weight lifting and doing calisthenics,” Paul Weston, the stunt coordinator on “Aliens” said in a behind the scenes documentary. Though if they wanted the real Colonial Marine experience, the actors should have spent the day police calling trash.

3. The Colonial Marines were given free rein to decorate and decal their own equipment

Cameron called the actors playing the Marines to the set one day and presented them with a bunch of random crap on a table — paint, string, animal bones, you name it — along with instructions for the would-be grunts to go to town decking out detailing their gear.

Mark Rolston, who played the gruff and intimidating machine gunner Drake, hung chicken bones from his body armor and on a necklace, string and feathers from his cover, and painted “My Bitch” across his Smart Gun. Jenette Goldstein, who played Vasquez, wrote “Adios” on her weapon and “El Riesgo Siempre Vive,” a line from a book of poems that means “the risk always lives.”

Paxton, whose salty short-timer, Pvt. Hudson brought the comedic relief, sketched designs on his armor for the film crew’s artists to paint over, including the name of his girlfriend at the time, a Japanese love knot, a skull and crossbones, and a line on the back saying “Contents under pressure. Dispose of properly.”

4. The camaraderie between the actors who played the Marines was genuine

The scene where the audience first meets the Colonial Marines was filmed at the end of the shooting, well after the actors had already spent months training and getting to know each other, in order to make their relationships feel more authentic, like they were born out of hardship in the same manner as an actual military unit.

Due to other film projects, Sigourney Weaver, William Hope (Lt. Gorman) and Paul Reiser (Burke, the conniving corporate lackey), had little contact with the actors who played the Marines until after filming and training had started. The effect was that, when the new boot-tenant and two civilians show up in the film, they’re regarded by the Marines with genuine skepticism.

“It was good that we were together first and that Sigourney, and Ripley, come in later when we’re all a unit and she’s the outsider,” said Goldstein. “It was perfect, and the same thing with Burke and Gorman. It was easy that way, because they were outsiders.”

5. Some of the film's futuristic equipment has found its way into the real world.

The armed forces of the world have yet to replicated the energy weapons that define science fiction, but one gadget from “Aliens” actually has a real-world counterpart. As Task & Purpose reported last week, the U.S. Army is developing a “Third Arm” ultra-light exoskeleton designed to take the weight off a soldier’s weapon:

Designed by the Army Research Laboratory, the arm is a 4-pound carbon-fiber exoskeleton which attaches to a soldier’s back via their tactical vest and connects to the weapon’s Picatinny rail system, Defense News reports. The arm is also ambidextrous and can be mounted on either side of the body. A recent demo covered by Defense News showed just an M4 carbine, but the arm is capable of hefting heavier weapon systems, up to 20 pounds.

Sure, it’s not exactly the same as the harness for the M56A2 Smart Gun from “Aliens,” and we can’t be sure the Army was directly inspired by the film, but let’s be real: military weapons designers know a good idea when they see one, fictional or otherwise.

6. The hardass platoon sergeant, Apone, was played by a Marine veteran

Sgt. Apone, the grizzled sergeant whose gruff bark belted past his fat cigar, added an air of authenticity to the Colonial Marines for a simple reason: the actor, Al Matthews was himself a Marine veteran who served in Vietnam. Reportedly, that’s where he gained an appreciation for weapon’s discipline and firearm safety, something he made his fellow actors uphold on set.

“Everyone’s instinct is automatically to put their fingers on the trigger, and they stopped doing that on set with me,” Matthews said in a documentary about the making of the film. “That’s the way I was trained. Thank you very much America. If you put your finger on the trigger when you’re talking or waving your weapon around, I’m gonna jam it down your throat. I’m gonna do that.”

7. One of the film’s most iconic lines, delivered by a Colonial Marine, was improvised

Yeah, that’s all Paxton, though it’s not the only line he ad-libbed. At the 2016 Comic-Con convention, when cast reunited to celebrate the 30th anniversary of the film, and Paxton reminisced about his oft-quoted line: “Game over, man! Game over!”

The line came from classic arcade games where, at the end of your run, some pixelated text would hover on the screen taunting you with the words “Game Over.” According to Gizmodo, Paxton said he wondered if anyone had ever used the line, and gave it a shot having no idea it’d be such a hit. Clearly it was.

Occasionally, Paxton would deliver a comedic or sarcastic line during a shoot, and Cameron would add it in, or reshoot a later scene with the line added into the script. More than just comedic relief, Paxton's character provided the audience with an opportunity for cathartic release: in a flick with endless bloodshed, you could still have a laugh, thus lowering the tension among viewers so it could be ratcheted right back up again, as Cameron pointed out during the 2016 “Aliens” reunion at Comic-Con.

Eventually, as any good “Aliens” fan knows, the good times end — and it’s just game over, man. Game over.