1. For the ceremony to honor the Unknown Soldier, General John Pershing selected eight American heroes from World War I... 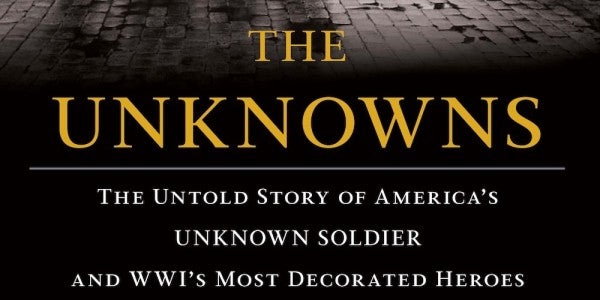 1. For the ceremony to honor the Unknown Soldier, General John Pershing selected eight American heroes from World War I to server as Body Bearers. They included some of the most decorated enlisted men in the U.S. military and represented the major service branches and specialties: the Army, Navy, Marines, Infantry, Cavalry, Field Artillery, Coast Artillery (Heavy Artillery) and Combat Engineers. Their individual stories — so gripping that each could be its own feature film — tell the larger story of America's involvement in the Great War.

2. One of those Body Bearers was U.S. Navy Gunners Mate James Delaney, a salty, tattooed sailor assigned to protect a cargo ship. He and his crew fought a German U-boat for hours in a running deck gun battle. The two vessels fired hundreds of rounds on each other, and the sub scored several direct hits that slowed the American boat to a crawl. Finally, out of ammunition, Delaney’s men had no choice but to surrender. The U-boat captain took the American Navy gunners prisoner aboard the submarine, where they experienced scenes that could have been taken from the movie Das Boot. The Body Bearer barely survived a depth charge attack, a fight with an Allied decoy ship and a deadly mine field.

3. Another Body Bearer, Corporal Thomas D. Saunders of the U.S. Army 2nd Engineers, volunteered for a virtual suicide mission to cut through the barbed wire that crisscrossed the no-man's land between the trenches on the Western Front. Both sides of the conflict revered the American Indians for their legendary prowess as warriors, and as a member of the Cheyenne tribe, Saunders was frequently selected for critical missions. Not only did Saunders survive and blaze a path through the wire, snipping each strand with manual wire-cutters while under fire, he and another soldier continued on behind the lines and fought their way into a castle the Germans were using as a headquarters. All on their own, the two men took 63 Germans prisoner.

4. It was a woman, Marie M. Meloney, editor of a popular magazine, who originally spearheaded the initial idea to create a monument to honor an American Unknown soldier. U.S. Representative Hamilton Fish, a white officer in the Harlem Hell Fighters (a unit made up largely of African Americans and Puerto Ricans) in the war, ran with the effort, introducing legislation for the creation of the monument.

5. The Tomb was meant to honor the fallen and heal the wounds Americans had suffered during the war, and it also provided an opportunity to close some of the racial and ethnic divides within the country. At the ceremony, Chief Plenty Coups spoke, saying “I feel it an honor to the red man that he takes part in this great event, because it shows that the thousands of Indians who fought in the great war are appreciated by the white man. I am glad to represent all the Indians of the United States in placing on the grave of this noble warrior this coup stick and war bonnet, every eagle feather of which represents a deed of valor by my race. I hope that the Great Spirit will grant that these noble warriors have not given up their lives in vain and that there will be peace to all men hereafter. This is the Indians’ hope and prayer.”

Patrick K. O'Donnell is the author of eleven books, with the most recent just published under the title, The Unknowns: The Untold Story of America's Unknown Soldier and WWI's Most Decorated Heroes Who Brought Him Home. His Twitter handle is @combathistorian.