Maintaining the vigil in any and all conditions is part and parcel of the rigorous training that the Tomb guards undergo before they assume their duty as a sentinel. 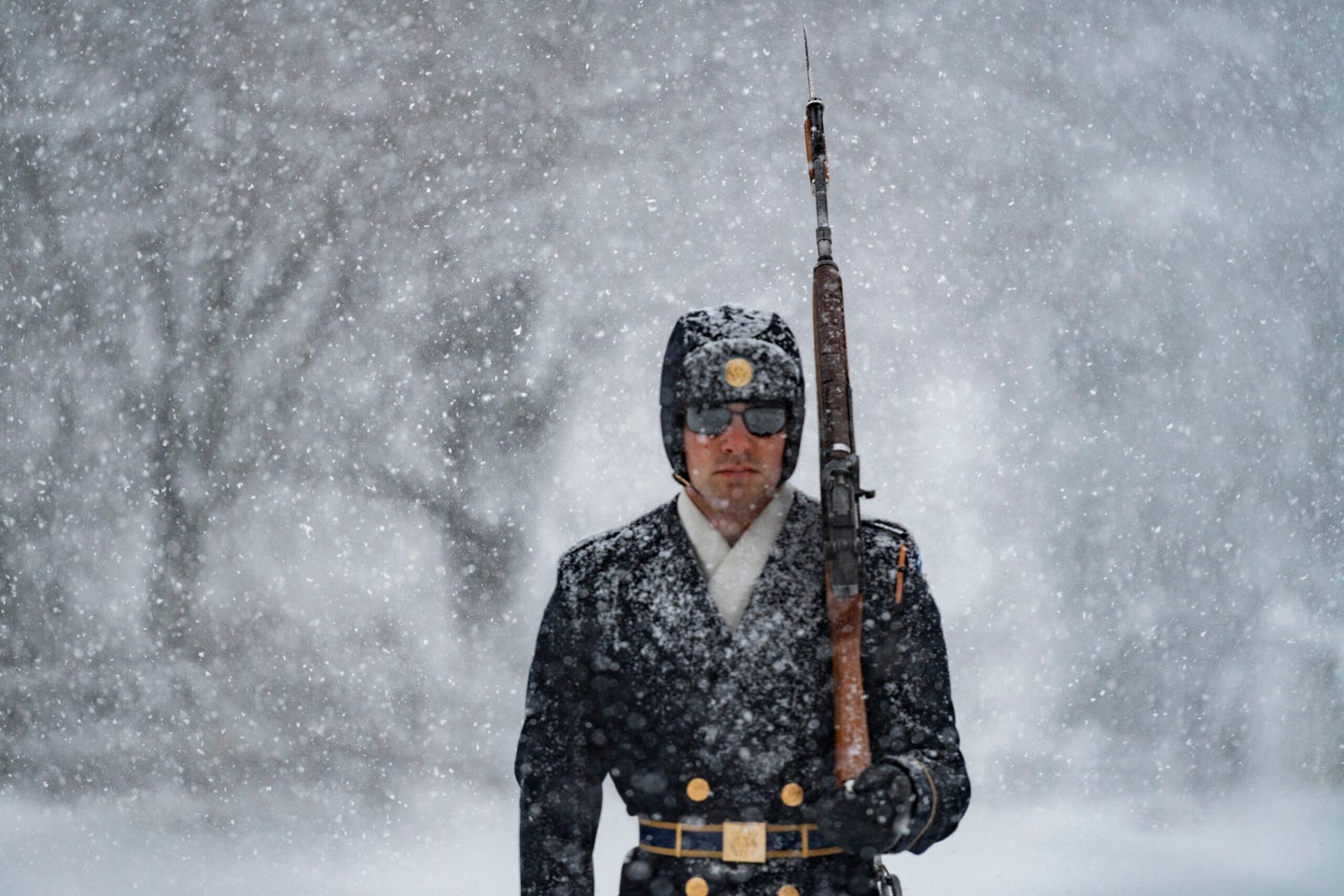 Monday morning saw the Washington, D.C. area receiving a rare blanketing of snow, ranging from 5 to 10 inches in some locations. For the sentinels who stand guard at the Tomb of the Unknown Soldier in Arlington National Cemetery, 24 hours a day, 365 days a year, that meant some less than stellar duty conditions.

Photographs showed the guard detail of the 3rd U.S. Infantry Regiment, known as the Old Guard, marching amid the heavy snowfall in front of the Tomb, the final resting place for unknown service members killed during World War I, World War II, and the conflicts in Korea and Vietnam.

Dedicated on Nov. 11, 1921 by President Warren G. Harding, the Tomb was established in the aftermath of World War I to honor American soldiers who, as the Tomb’s inscription reads, remain “known but to God.”

Guards were first placed at the Tomb during the day five years later, in 1926, “after one too many tourists had used the grave as a picnic table,” according to an Army news release. In 1937, guarding the tomb became an around-the-clock duty, and in 1948 the Army designated the Old Guard as the ceremonial unit tasked with performing said duty.

Maintaining the vigil in any and all conditions is part and parcel of the rigorous training that the Tomb guards undergo before they assume their duty as a sentinel. For six to nine months, guards complete a training regimen that includes marching, uniform preparation and the study of military history. Guards often train for their ceremonial duties in the middle of the night, when the Tomb is closed to visitors.

“You do training during the day…manual, uniform, uniform classes. And then at night, you get your hours of training in,” Staff Sgt. Kevin Gilliam said in a 2010 Army news release. “The guards who are posted at night aren’t a ceremonial guard. They’re in [Army Combat Uniform]. So they’re working on walking the mat, perfecting their lines, angles. We also do training as a whole. The whole squad will go out at night and train the guard changes and things like that.”

Bad weather is often to be expected during a shift. As the creed of the Tomb guards says, they are expected to march and perform their duties through “the discomfort of the elements.” That applies even during snowstorms and other extreme weather conditions.

In the case of, say, a hurricane, the Tomb guards may have some brief respite.

“The Tomb Guards have contingencies that are ready to be executed if the weather conditions ever place the soldiers at risk of injury or death (i.e. lightning, high winds, etc),” reads the guards’ contingency plan for extreme weather conditions. “This ensures that sentinels can continue the mission while ensuring safety. It is the responsibility of the chain of command from the sergeant of the guard to the regimental commander to ensure mission accomplishment and soldier welfare at all times.”

In 2011, when Hurricane Irene made landfall near the Chesapeake Bay, a spokesman for the Old Guard told The Daily Beast that, if necessary, the guards would move to a small enclosure nearby. They would, however, always remain within sight of the Tomb itself.

Service members in ceremonial roles have a long history of braving the elements and maintaining their bearing through all manner of disturbances, like Marine sentries at the White House, who have a track record of enduring unexpected conditions, all while maintaining their composure. Earlier this year, a group of Marine Corps body bearers serving on a funeral detail at Arlington National Cemetery waded into knee-deep flood waters in their Dress Blue uniforms to help a couple trapped in a stalled out car. Fortunately for the Tomb guards, hurricane season is not scheduled to begin for another six months.