The Pentagon’s 2021 report card: Cs, a couple Fs, and an incomplete 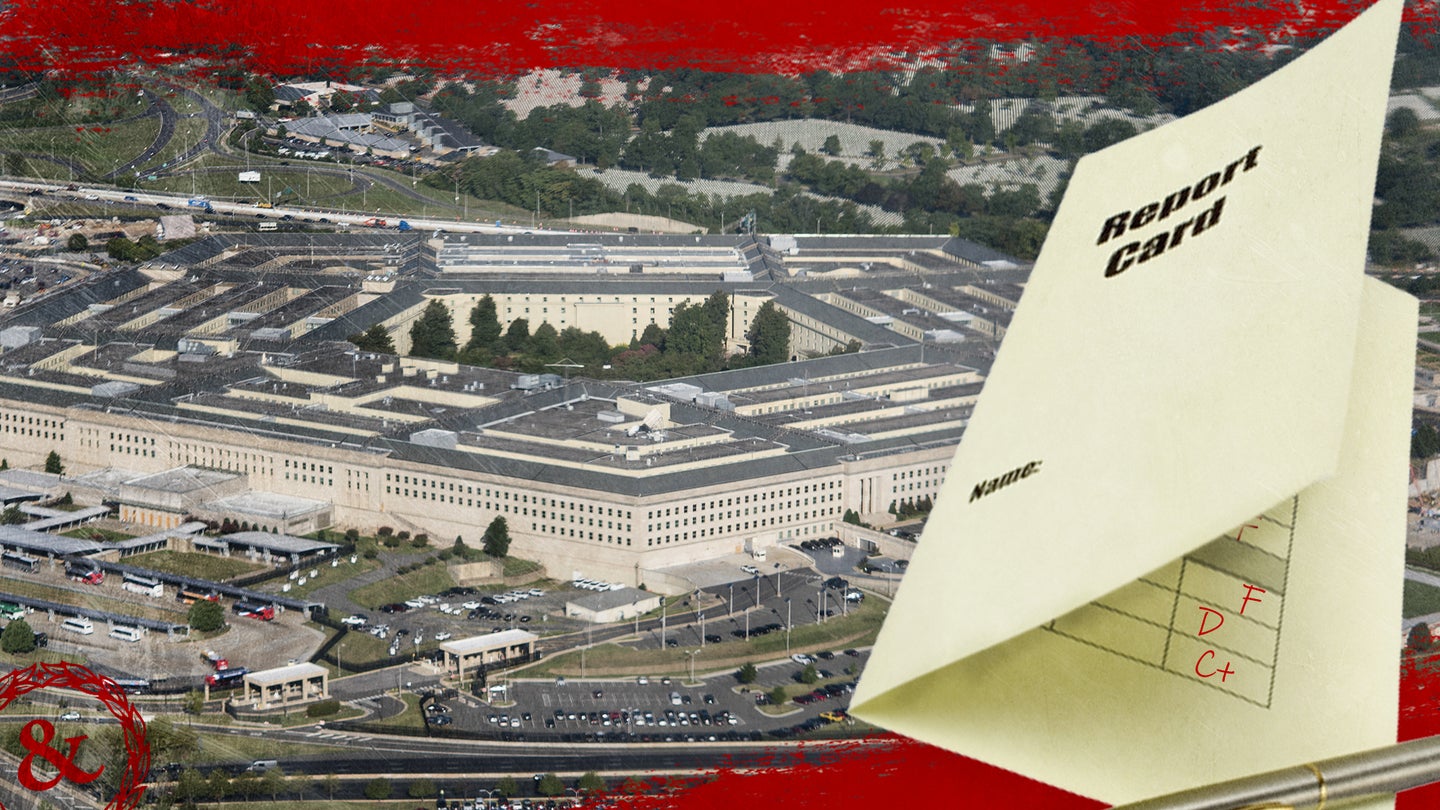 Even with the most generous curve, the Pentagon’s grades for 2021 range from underwhelming to terrible. And by Pentagon, we mean the top of the chain of command rather than rank-and-file troops under orders to unquestionably carry out everything and anything the brass dreams up.

Indeed, service members held the line in Iraq, Syria, and other hotspots despite a blend of indifference, a bias for inaction, and an underestimation of danger emanating from inside the Washington, D.C beltway. That combination resulted in a Department of Defense failing to protect American democracy at home, leading an unsuccessful campaign to eradicate racism in the ranks, and ordering a poorly-managed and ultimately embarrassing U.S withdrawal from Afghanistan that forced junior service members into making anguished, life-or-death decisions on the ground.

Bottom line: The Pentagon’s subpar performance in 2021 is not a perception problem. It’s a results problem. The Defense Department has shown it has room to grow in several critical areas including the ones below:

Even though the Defense Department plans for every sort of imaginable contingency, the Pentagon was unprepared to defend the Capitol from a mob of insurrectionists who came dangerously close to overturning the democratic process on Jan. 6.

Historians will debate for years why the National Guard troops responding to the attack on the Capitol building arrived long after the riot had ended. The Defense Department exonerated itself — as it is apt to do — for its delayed response to the insurrection, but retired Maj. Gen. William Walker, who led the District of Columbia National Guard at the time, has demanded that the report be retracted, arguing it incorrectly determined he had waited for more than half an hour to send Guardsmen to the Capitol after getting approval to move his forces.

Col. Earl Matthews, who served as Walker’s staff judge advocate at the time, also wrote in a Dec. 1 memo that the inspector general’s report contained “myriad inaccuracies, false or misleading statements, or examples of faulty analysis.”

In May, former Defense Secretary Christopher Miller told lawmakers that the Defense Department is not responsible for leading law enforcement responses to domestic situations. He’s right, but his testimony also indicates the main reason why the Pentagon was so slow to send National Guard troops to the Capitol was that military leaders felt the insurrection was someone else’s problem.

Just as firefighters don’t get to choose which blazes they extinguish, the military can’t passively watch as a coup unfolds because it’s not their job to rescue democracy.

The military is to be commended for saving 124,000 Afghans following the fall of Kabul in August. We will never forget the 13 brave service members who gave their lives trying to save as many Afghans as possible before the evacuation ended.

But the decision to leave Bagram Airfield was in retrospect a tragic mistake because it left Hamid Karzai International Airport in Kabul as the only way out for Americans and Afghans who had suddenly become trapped behind enemy lines after the capital city fell to the Taliban on Aug. 15.

And while the Pentagon can blame the State Department for starting evacuation efforts three months after President Joe Biden announced the troop withdrawal from Afghanistan, Defense Secretary Lloyd Austin reportedly had no answer when he was asked by a lawmaker in April how the Biden administration would evacuate thousands of Afghans who had worked for the U.S. government over the past 20 years, Politico reporters Andrew Desiderio and Lara Seligman first revealed.

After the attack at the airport’s Abbey Gate that killed 13 Americans and hundreds of Afghans, the U.S. military launched a drone strike that killed 10 civilians, including seven children, based on ambiguous intelligence that a suicide bomber was heading towards the airport.

To retired Marine Col. Andrew Milburn, who spent more than 30 years as an infantry and special operations officer, the Aug. 26 attack and botched drone strike should be grounds for Austin to submit his resignation along with Army Gen. Mark Milley, chairman of the Joint Chiefs of Staff, and Marine Gen. Kenneth McKenzie Jr., head of U.S. Central Command.

“Resignation won’t atone for lives lost, or the debacle that American involvement in Afghanistan became, but it would at least demonstrate that these men understand the ethics of their profession,” Milburn wrote in an Oct. 13 commentary for Task & Purpose. “It would help calibrate the moral compass of thousands of officers beneath them. It might even help all three find absolution if such a thing still matters to them.”

Getting troops to take the COVID-19 vaccine: C+

The Defense Department gets its best grade for implementing the mandatory COVID-19 vaccine requirement after the U.S. Food and Drug Administration granted full approval to Pfizer’s vaccine in August. About 97% of active-duty troops have been fully vaccinated and the military services have begun separating unvaccinated troops who do not have an approved medical or religious exemption. As of Wednesday, the Marine Corps had kicked out 206 Marines for refusing to get vaccinated.

The Army has also relieved six active-duty leaders, including two battalion commanders, who refused to get vaccinated. And Air Force Col. Katheryn Ellis, claims she was relieved as commander of the 14th Medical Group in October because she failed to order two civilian employees under her command to get vaccinated.

But the Defense Department’s failure to act quickly and decisively to force Oklahoma Gov. Kevin Stitt to abide by the military’s requirement for all National Guard troops to be vaccinated allowed the governors of six other states to join the mutiny. Texas Gov. Greg Abbott has gone so far as to order the adjutant general of his state’s National Guard to not comply with the vaccine mandate.

While Austin has announced that National Guardsmen need to get vaccinated to be paid by the federal government or earn credit toward federal retirement, Eugene Fidell, who teaches military law at New York University Law School, described such measures as “a kid glove approach.” It’s time for the gloves to come off.

Defense Secretary Austin has been trying to weed out white supremacists and other extremists who have penetrated the military while contending with grandstanding members of Congress, who repeat Fox News personality Tucker Carlson’s specious claims that the military has gone “woke.”

In February, Austin ordered the entire military to hold discussions on extremism in the ranks. While the move was bitterly opposed by Republicans in Congress, who accused the Pentagon of encouraging hostility towards white people, feedback from those “stand-downs” allowed the Defense Department to come up with much more encompassing definitions of what extremist organizations are and what “active participation” in such groups means.

While these are good first steps, the Pentagon has consistently downplayed the number of extremists in uniform since the Jan. 6 Capitol Hill riots, for which an active-duty Marine Corps major, four reserve component service members, and more than 40 veterans have been charged so far.

The Defense Department has determined that about 100 active-duty and reserve-component troops have taken part in extremist activities, Pentagon spokesman John Kirby told reporters on Dec. 20. But an Associated Press investigation showed that extremists have been infiltrating the military for decades, meaning the “100” figure is likely an undercount.

The Pentagon’s latest definition of extremist groups also does not list specific organizations that troops cannot belong to, such as the Order of Nine Angles, a Neo-Nazi and Satanic group to which Army Pvt. Ethan Melzer allegedly belonged to. Federal prosecutors claim that Mezler planned to kill members of his own unit.

In addition to the problem of white supremacists, the Pentagon must also contend with longstanding issues of institutional racism. A 2017 survey of active-duty troops that the Pentagon buried for years found that 30% of Black respondents and 22% of Asian respondents felt their chances for promotion would be harmed if they reported racial harassment and discrimination. Separately, a December 2020 Air Force review found that Black airmen and Space Force Guardians are 74% percent more likely than their white peers to receive nonjudicial punishment and 60% more likely to face a court-martial.

In other words, the Pentagon has a long way to go.

There aren’t any indications that the Pentagon realizes that the people both in and out of the government who failed to throw out the results of legitimate, democratic elections could strike again. No senior defense official has publicly said that the United States military will not sit idly by if the loser of 2024’s presidential election launches another assault on the Constitution.

When asked if the military would be ready if there is another attempted insurrection on the one-year anniversary of the Capitol Hill riot, Kirby said there were plans for all types of contingencies but there are no plans for U.S. troops to be on the streets on Jan. 6, 2022.

“There’s no indication that there’s going to be a need, but should there be a need we will have learned from last January’s events, and we’ll be ready to support as required whatever local needs might be, local and civil needs might be,” Kirby said at Dec. 21 Pentagon news briefing.

On Thursday, Kirby announced that Austin has taken a number of steps to improve the Defense Department’s ability to support police and other law enforcement agencies in Washington, D.C. Those measures include making the defense secretary the sole authority to approve urgent requests for the District of Columbia National Guard to support civilian law enforcement agencies.

But surely the Pentagon can do better than that. If police are once again overwhelmed in post-election chaos, the military had better do a better job next time of safeguarding democracy at home. It may not be in the Pentagon’s job description, but it’s still the military’s duty to protect American democracy and defend the Constitution.