"Clearly intelligence was wrong on this vehicle." 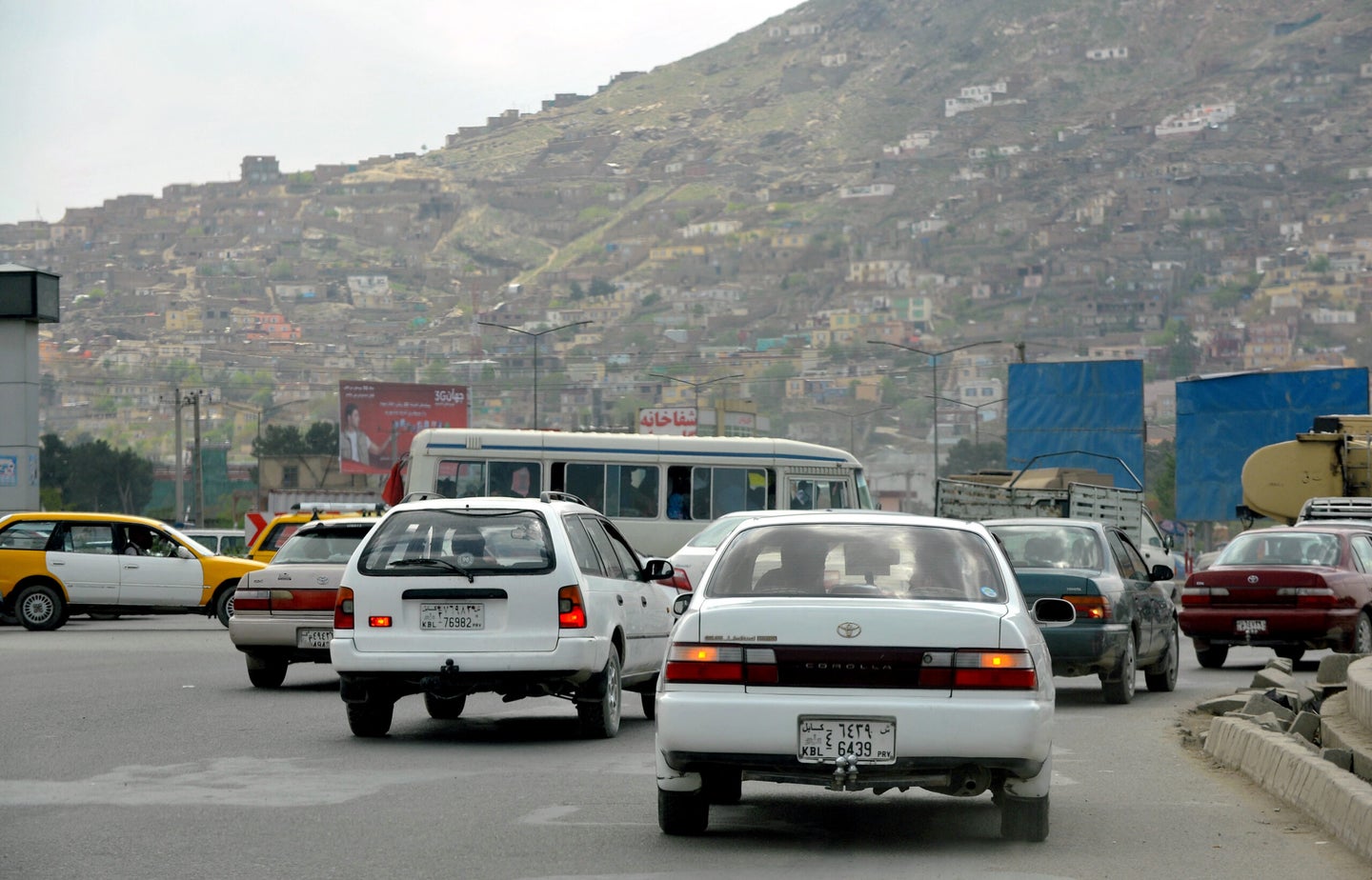 In a picture taken on April 22, 2013, Toyota Corolla cars of various production years ply the streets of Kabul. Cheap, robust and reliable: consumer culture may be relatively new to Afghanistan but when it comes to cars, there is a clear favourite -- the trusty Toyota Corolla. In a country where even paved roads in the smartest parts of the capital are riddled with pot holes, the sturdy Japanese-made car is the vehicle of choice for all but the richest. AFP PHOTO/Manjunath KIRAN (Photo credit should read Manjunath Kiran/AFP via Getty Images).
SHARE

An American Predator drone strike in Kabul on Aug. 29 that U.S. military officials acknowledged on Friday had killed 10 innocent civilians with no ties to terrorists was based on intelligence asserting that the use of a white Toyota Corolla — the country’s most ubiquitous vehicle — would be a “key element in the next attack” expected at the Hamid Karzai International Airport.

“Clearly intelligence was wrong on this vehicle,” said Marine Gen. Frank McKenzie, the commander of U.S. Central Command, who apologized for a strike that killed as many as 10 civilians, including seven children. “I am fully responsible for the strike and tragic outcome.”

“I offer my profound condolences to the family and friends of those who were killed,” McKenzie said during a Pentagon news briefing. “This strike was taken in the earnest belief that it would prevent an imminent threat to our forces and the evacuees at the airport.”

McKenzie claimed that ground forces in Afghanistan had received some “60 pieces of intelligence” ahead of the strike that were related to threats from the Islamic State group affiliate ISIS-Khorasan, suggesting “imminent threats” from rockets, car bombs, improvised explosive devices, and militants armed with suicide vests. American military officials had become increasingly worried at the possibility of additional casualties after the horrific attack at the airport’s Abbey Gate on Aug. 26 which killed 13 American service members and hundreds of Afghan civilians.

“Descriptions of vehicles and subjects were ubiquitous,” as one Army National Guard officer recently wrote of his experience in Kabul. “We knew ISIS-K was attempting to derail the evacuee operations, run us out of town, and discredit and challenge the Taliban. … [vehicle-borne IEDs and suicide attacks], rocket attacks, and complex ambushes were reported as imminent. It’s hard sometimes not to sound like Chicken Little. We knew the sky was falling…we just didn’t know when or where.”

Two days before the strike, “sensitive intelligence” indicated that a compound was being used by ISIS-K planners to “facilitate future attacks,” McKenzie said, adding that “one of the most recurring aspects of the intelligence” was that a white Toyota Corolla would be used.

McKenzie did not mention that roughly 90% of the cars registered in Afghanistan are Corollas, according to a 2015 article from Stars & Stripes. News reports have described it as “Afghanistan’s favorite car” and “the car of Afghanistan.”

“White is a favorite of buyers because it shows the dirt less, there is a lot of dust here,” an Afghan man who sold used cars in Kabul for two decades told AFP for a 2013 article, which also cited Kabul traffic police estimating about 80% of the 700,000 vehicles driving through Kabul that year were Corollas. “Many people buy them because they are robust, cheaper and there are spare parts available everywhere.”

On the morning of Aug. 29, 2021, as many as six MQ-9 Reaper drones were flying overhead and monitoring the suspected ISIS-K compound when a white Toyota Corolla pulled up, according to McKenzie. The driver, Zemari Ahmadi, a long-time worker for a U.S. aid group, was taking colleagues to and from work, according to an exhaustive visual investigation conducted by The New York Times.

American officials did not know the identity of the car’s occupants prior to the missile impact but appeared instead to focus on “pattern of life” behavior before conducting a so-called “signature strike” against a person merely suspected of terrorist activity. Drone operators watched as Ahmadi made short trips around Kabul throughout the day until about 2:00 p.m. when he was observed with several men at a different compound loading the trunk with what the military believed were explosives. They were actually water jugs.

The strike cell had “established reasonable certainty” the vehicle was an imminent threat to U.S. forces, a Central Command official told Task & Purpose. The official declined to say what level of confidence intelligence officials had in their assessment prior to the strike.

During the briefing, McKenzie acknowledged that what the military had previously characterized as a “righteous strike” was, in fact, a “terrible mistake.”

“I will stress this was not a rushed strike,” McKenzie said. “The strike cell deliberately followed and observed this vehicle and its occupants for eight hours while cross-checking what they were seeing with all available intelligence to develop a reasonable certainty of the imminent threat that this vehicle posed to our forces.”

McKenzie also acknowledged that previous claims that explosives in the trunk of the vehicle caused secondary explosions after the strike were incorrect; he said it was “most likely” that another blast was caused by a propane tank located near where the car was parked at the time the Predator drone fired.

“We still took rockets the next day as you know, and they fired those rockets from near point one and from other places actually near the route of this vehicle,” McKenzie said. “But I would tell you unequivocally in this case clearly the intelligence was wrong on this vehicle, and we certainly regret that as I’ve been very clear.”