The Taliban may not have breached the walls of Bagram, but they damaged the hell out of its main passenger terminal 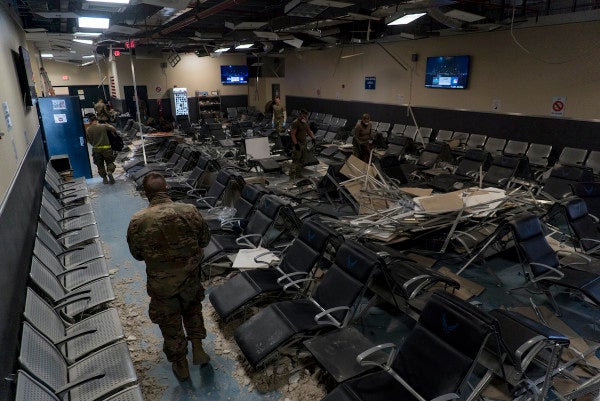 The pictures, which are part of a photo essay called “Bagram stands fast,” were posted on the Defense Visual Information Distribution Service's website on Thursday.

From the pictures, it appears that the blasts caused many of the terminal's ceiling tiles to collapse. Airmen from the 405th Expeditionary Support Squadron spent Thursday removing damaged metal and other debris from the structure.

The Taliban attempted to invade the base early on Wednesday morning by attacking a hospital that is just outside Bagram Airfield's perimeter. The medical facility was under renovation at the time.

U.S. forces ultimately killed the Taliban fighters inside the hospital by blasting it with airstrikes. A video posted on Twitter by an administrator for Army WTF Moments purportedly shows at least two munitions striking the hospital on Wednesday

A spokesman for Operation Resolute Support, who would only speak on condition of anonymity, could not confirm that the video showed the airstrikes against the Taliban-held hospital.

No enemy fighters managed to breach the base's perimeter during the attack, the spokesman said.