'We mourn their loss. We will treat their wounds.  And we will support their families in what will most assuredly be devastating grief.' 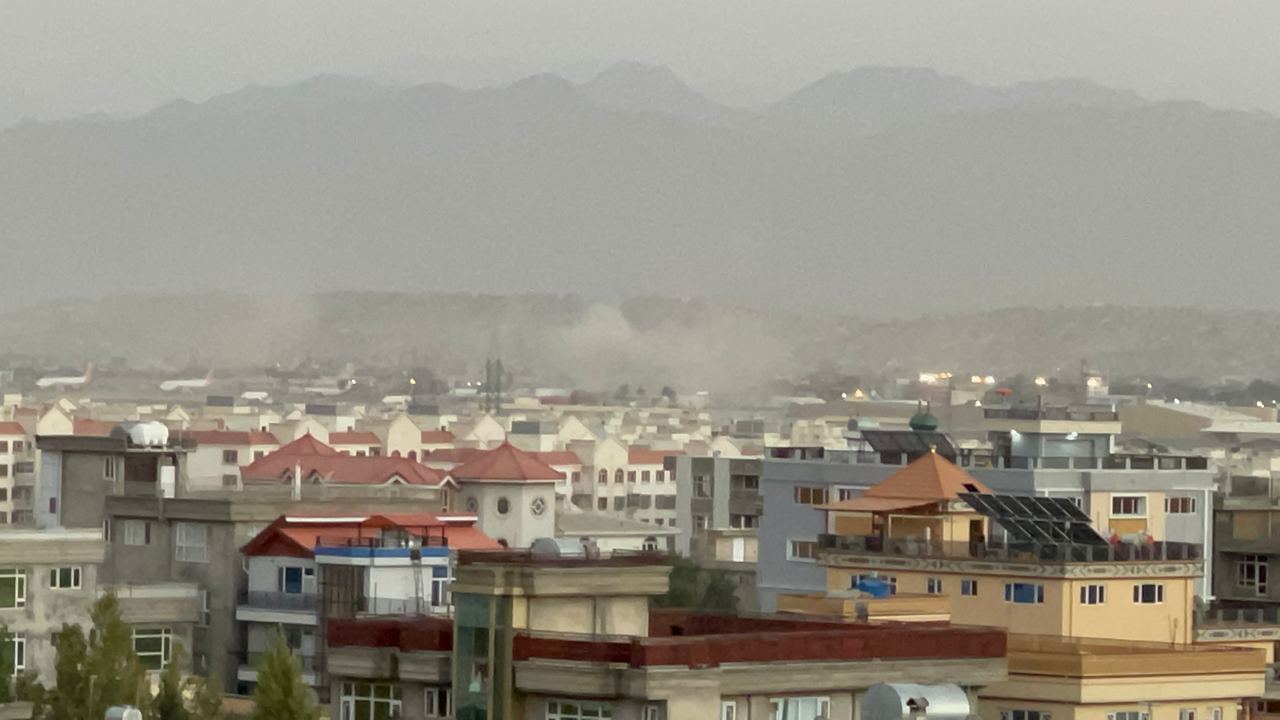 Smoke rises after two explosions reported outside Hamid Karzai International Airport, the center of evacuation efforts from Afghanistan since the Taliban took over in Kabul, Afghanistan on August 26, 2021. (Photo by Haroon Sabawoon/Anadolu Agency via Getty Images).
SHARE

Thirteen American military service members were killed and another 18 troops were wounded on Thursday in explosions near Kabul’s international airport in Afghanistan.

At least two explosions took place at Hamid Karzai International Airport’s Abbey Gate and the adjacent Baron hotel, Marine Gen. Kenneth McKenzie Jr. head of U.S. Central Command, said at a Pentagon news briefing. The blast at the airport also killed numerous Afghans who were desperately trying to escape from the Taliban. It is unclear at this time if there was a third blast later in the day.

The Pentagon is describing the incident as a “complex attack.”

Speaking to reporters on Thursday, McKenzie described the attacks as suicide bombings and attributed them to the Islamic State terrorist group, which has had many members freed from Afghan prisons when Taliban captured Kabul more than a week ago.

“The attack on the Abbey Gate was followed by a number of ISIS gunmen, who opened fire on civilians and military forces,” McKenzie told reporters.

“On behalf of the men and women of the Department of Defense, I express my deepest condolences to the loved ones and teammates of all those killed and wounded in Kabul today,” Defense Secretary Lloyd Austin said in a statement. “We mourn their loss.  We will treat their wounds.  And we will support their families in what will most assuredly be devastating grief.”

Citing two U.S. officials, Reuters reported that the attack is one of the deadliest for American troops in the 20-year war. Prior to Thursday, the last U.S. service members to die in Afghanistan by hostile fire were Sgt. 1st Class Antonio Rodriguez and Sgt. 1st Class Javier Gutierrez, two Army Special Forces soldiers who were killed by Afghan soldiers in a green-on-blue incident in Nangarhar Province on Feb. 8, 2020.

The confirmation of U.S. casualties and wounded comes after a day of uncertainty that began with scattered reports, followed by photos and videos of the attack which were shared across social media.

Thursday’s blast came after U.S. troops had been on alert for a possible attack from the Islamic State terrorist group.

At Thursday’s briefing, McKenzie told reporters that roughly 104,000 people had been evacuated from Afghanistan since efforts began on Aug. 14. However, the looming Aug. 31 withdrawal date for U.S. troops means that tens of thousands of Afghans attempting to flee Taliban rule might be left behind as evacuations end, including those who face the threat of reprisal by the Taliban for working with the U.S.-led Coalition during the war.

Since Kabul fell to the Taliban more than a week ago, members of the militant group have established armed checkpoints outside of the Hamid Karzai International Airport in the nation’s capital. The presence of Taliban fighters outside the airport has forced droves of refugees, hoping to flee their Taliban rule, to pass a gauntlet of armed militants as they make their way to one of the airport’s many gates.

Even if they do get through, there’s no guarantee that the gate they arrive at will be open or willing to admit them. Additionally, the situation on the ground in Kabul has placed American troops in close proximity with members of the very group they’ve spent the last twenty years fighting across Afghanistan’s many provinces.

Video published online earlier this week showed Taliban fighters within arms reach of U.S. Marines manning a checkpoint, and raised some concerns among veterans of that war about the possible danger such a fluid — and potentially volatile — situation posed.

A post shared by CLOSE WITH AND DESTROY (@maneuver_____up)

“It’s terrifying. It’s a nightmare scenario,” Zachary Bell, a former Marine infantryman who deployed twice to Afghanistan with 1st Battalion, 6th Marine Regiment, first to the Garmsir District and then during the Battle of Marjah in 2010, previously told Task & Purpose.

“But to be in a scenario where you can’t engage and can’t help people who are defenseless, feet away from you,” added Bell “It just feels dangerous on so many levels.”

It is unclear how exactly Thursday’s attacks will affect the evacuation of American citizens and Afghans who are trying to get flights out of the country. President Joe Biden recently announced that the evacuation will end on Aug. 31, although he’s ordered the Pentagon and State Departments to come up with plans in case it needs to last longer than that.

Task & Purpose has received numerous messages from both Afghans and Americans about people being unable to get past Taliban checkpoints or pass through the gates to Hamid Karzai International Airport.

U.S. Reps. Seth Moulton (D-Mass.) and Peter Meijer (R-Mich.) made a surprise visit to the airport on Tuesday, after which they announced that the evacuation could not be completed by Biden’s Aug. 31 deadline.

“After talking with commanders on the ground and seeing the situation here, it is obvious that because we started the evacuation so late, that no matter what we do, we won’t get everyone out on time, even by September 11,” both lawmakers, who served in the military, said in a joint statement. “Sadly and frustratingly, getting our people out depends on maintaining the current, bizarre relationship with the Taliban.”

Hours before Thursday’s attacks, Kirby tweeted that the entire evacuation was not coming to an end in 36 hours even as advocates for Afghans at risk were hearing that the last evacuation flights were about to take off.

Regardless, it’s unlikely that the lifeline for Afghans and American citizens who are frantic to escape the Taliban will be available for too much longer.