An Army lieutenant is heading to court for allegedly enlisting the aid of another military officer to help him buy guns to illegally sell to a convicted felon, before the firearms made their way into the hands of a drug trafficker who was busted with the weapons, and $4 million worth of heroin. 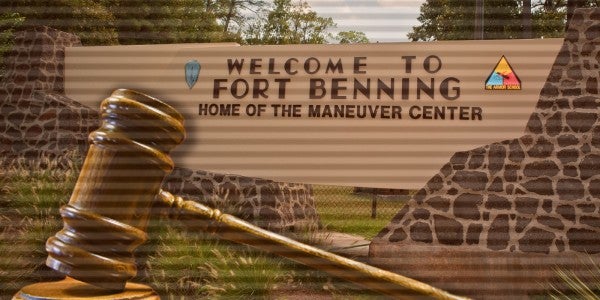 A U.S. Army officer has been accused of buying guns that ended up in the hands of an alleged drug trafficker in Washington, D.C.

Second Lt. Kofi Appiah-Mainoo, 30, was arrested on Oct. 28, 2019 following an FBI and U.S. Bureau of Alcohol, Tobacco, Firearms and Explosives investigation into arms trafficking. James Hutchings Jr., a convicted felon who allegedly served as one of Appiah-Mainoo’s buyers and co-conspirators in the arms trafficking scheme, was arrested the next day. Both remain in pre-trial confinement.

Appiah-Mainoo, an armor officer who joined the Army in May 2017, is portrayed in an Oct. 24 federal criminal indictment as a soldier with “behavioral difficulties” who moonlighted as a “straw purchaser,” legally purchasing guns and then reselling them to people barred from owning them.

Additionally, Appiah-Mainoo was allegedly helped by a fellow military officer stationed with him at Fort Benning, Georgia. The second officer was not identified in court filings; officials at Fort Benning declined to comment.

“We acknowledge his arrest and are cooperating with civilian law enforcement,” Sue Ulibarri, a Fort Benning spokeswoman said, referring to Appiah-Mainoo. “To protect the integrity of any investigation or legal action in progress, we cannot comment further.”

The U.S. Attorney’s Office for the District of Columbia declined to comment. Attorneys for Appiah-Mainoo and Hutchings did not respond to requests for comment from Task & Purpose.

Still, according to court filings, the scheme apparently went on over about four months in 2018.

The second officer, meanwhile, bought a Ruger LCR .38-caliber revolver, two Glock 19 9mm pistols, and a Glock 22 .40-caliber pistol, according to court filings. Investigators claim the unnamed individual “straw purchased” the weapons with the intent to give all but the Glock 22 to Appiah-Mainoo.

Appiah-Mainoo allegedly sent Hutchings photos of some of the guns, along with a handwritten price list of ammo drums, extended magazines, handguns, and an AR-15 style rifle. Investigators allege that Appiah-Mainoo also used social media as a way to connect with other prospective buyers.

On Dec. 7, Appiah-Mainoo flew from Atlanta, Georgia to Washington, D.C. Reagan National Airport in Arlington, Virginia on Delta Airlines, which told investigators that he brought “shooting equipment with him.” While in the Washington area, investigators say that Appiah-Mainoo allegedly met with Hutchings and handed off the guns. He flew back to Atlanta two days later and “had no such baggage with him,” according to court filings.

The investigation into Appiah-Mainoo was launched after law enforcement officers discovered multiple firearms at the Washington, D.C. home of Linwood Douglas Thorne on Dec. 19, 2018, along with 100 pounds of heroin laced with fentanyl and 50 pounds of marijuana, according to court filings. The drug bust was one of the largest for the area in years, with the heroin alone estimated to be worth $4 million dollars, according to The Washington Post.

Investigators looking into Thorne, a convicted felon prosecutors say was a “high-level narcotics trafficker in the D.C. area,” found that three of the six guns at Thorne’s home had been purchased earlier that year in Columbus, Georgia by Appiah-Mainoo. The soldier then allegedly transferred them to Hutchings, who “acted as the vessel that enabled these firearms to end up in the hands of Thorne,” according to court filings.

Appiah-Mainoo and Hutchings face charges of trafficking arms across state lines “to a person previously convicted of a crime,” which is punishable by at least one year in prison.

“While the government appreciates any person’s service to the United States of America, the defendant’s service is already muddied by his criminal conduct,” prosecutors wrote in a Nov. 26, 2019 memorandum calling for Appiah-Mainoo to be detained prior to the trial.

Appiah-Mainoo “has had many behavioral difficulties while in service, including being absent without permission, lying to higher authorities, and was in the process of being removed from the military, notwithstanding the current criminal charges,” his commander at Fort Benning told investigators.

In interviews with investigators, Appiah-Mainoo claimed that he travelled to Washington “approximately every two weeks,” and when asked how often he checked firearms in his luggage, he replied that it was roughly “80 percent of the time.”

Court filings say Appiah-Mainoo admitted to having purchased approximately 20 firearms. When asked why he was bringing so many guns into the area, he told investigators he was planning on getting out of the Army and wanted them in Washington by the time he separated from the service. When pressed on the whereabouts of the guns he’d purchased in Georgia, Appiah-Mainoo claimed he’d asked his friends to destroy the weapons and throw them away.

In the court filings, investigators accused Appiah-Mainoo of changing his story and repeatedly lying.

Following Appiah-Mainoo’s arrest on Oct. 28, 2019, law enforcement officers searched his home in Columbus, Georgia. There they found three handguns — a Smith & Wesson pistol, a Glock 22, and one Springfield .45-caliber pistol — along with a cache of magazines and more than three hundred rounds of ammunition, the filings show.

More than 1,000 illegal firearms were recovered by police in 2018 in Washington alone, with more than 6,000 recovered in the past three years, The Washington Post noted in January 2019.

The court filings indicate that agents with the Bureau of Alcohol, Tobacco, Firearms and Explosives were unable to verify the whereabouts of all the firearms Appiah-Mainoo owned.