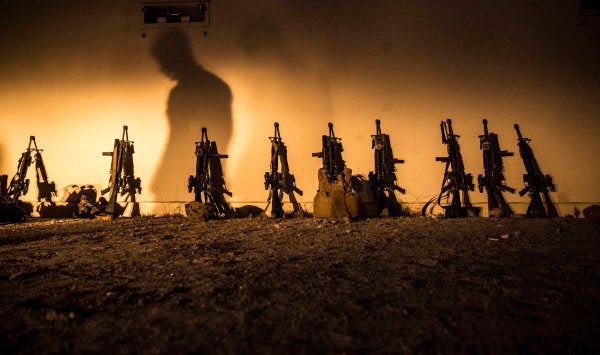 Tyler James Sumlin and Jason Wayne Jarvis showed up at a truck stop in El Paso, Texas on Nov. 14, 2018 and met with undercover agents from Homeland Security Investigations before following them to a nearby warehouse where they had agreed to exchange weapons for $75,000, according to a criminal complaint filed Nov. 15, 2018 in the Western District of Texas.

“Sumlin stated he was aware the firearms were to be exported to Mexico,” read the affidavit, written by HSI Special Agent Omar Fournier, who said that both agreed to be interviewed by agents without a lawyer present.

Upon their arrest at the warehouse, according to court documents, agents seized 32 rifles, three handguns, and five pounds of C4 explosives. They also seized silencers, a short barreled rifle, and a hand grenade, according to the indictment.

The plan, according to the indictment, was fairly simple. Beginning on or around June 6, 2018, Sumlin and Jarvis allegedly conspired to assemble a cache of weapons and then drive them across the country where they could be sold and then taken across the southern border.

Sumlin is a former Army EOD team leader, according to his LinkedIn profile; Jarvis is an active-duty sergeant first class currently assigned to 52nd Ordnance Group (EOD), a source told Task & Purpose on condition of anonymity.

Jarvis rented a Chevrolet Tahoe SUV in North Carolina and then drove down to Inervess, Florida to meet with Sumlin at his home, the indictment said. Once there, firearms separately acquired by Sumlin and Jarvis were “combined, wiped clean, and put in storage containers” before they were loaded into the truck, the document added.

The men then allegedly made the nearly 1,700-mile drive to El Paso, Texas, where they met with their buyer at around 9 a.m. But instead of walking away with a pile of cash, they were arrested without incident. Interestingly, Jarvis told agents he expected to earn $2,000 from the transaction, while Sumlin said his cut was $12,000, according to the affidavit, which would have left $61,000 in earnings.

Although the indictment doesn't list any other names, it does say the pair “had access to individuals who could help make and assemble National Firearms Act firearms,” and that, “because of their military duty had access to explosives and explosive devices.”

In a private Facebook group for EOD personnel, many reacted with shock. “Can you tell us what the fuck you were thinking,” one member wrote, according to a screenshot obtained by Task & Purpose, to which Sumlin replied, “I'd like to say lack of thinking is a more appropriate statement.”

Sumlin went on to say he was “more than likely thinking the same thing that the other 6ish people involved were thinking,” indicating that at least six others may have been involved in the weapons deal.

The case has been continued until April, according to a judge's order signed on Feb. 6. Still, Sumlin believes he'll be found guilty and sentenced to at least 5 years, according to a statement he wrote on Facebook on Feb. 23 asking for people to write him character statements.

“Well this was going to happen sooner or later, and since I have a rough date of when I'll be leaving might as well go public with this. Back in November I was arrested for doing somethings I shouldn't had been doing. I really messed up my future along with the future of anyone who is remotely effected by my life. I'll be sentenced here in 3 months. My lawyer is saying 5-7 years. I'm not looking for anyone's pity. I did the crime now I'm gonna do the time,” he wrote.

Attorneys for Sumlin and Jarvis did not immediately respond to a request for comment from Task & Purpose.