He was facing up to 70 years behind bars if all the charges stuck, but now he's getting five years probation. How'd that happen? 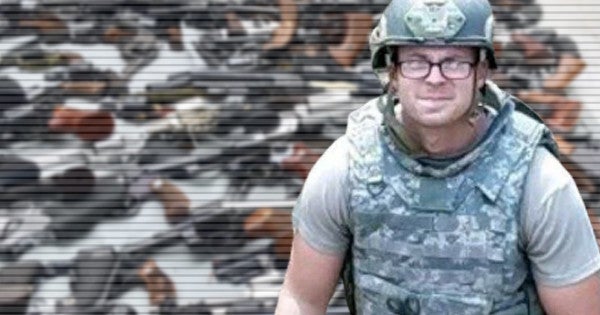 After a pair of Army explosive ordnance disposal technicians were indicted on federal charges for attempting to sell weapons and explosives to smugglers headed to Mexico, one of the two men involved has been sentenced after taking a plea deal, according to court documents filed on Wednesday.

In November 2018, Tyler Sumlin, an Army veteran and former EOD tech, was arrested along with Jason W. Jarvis, an active duty explosive ordnance disposal technician stationed at Fort Bragg, North Carolina, as Task & Purpose previously reported. The two were indicted on eight federal charges – including conspiracy to smuggle goods from the United States, and transferring firearms and explosives without a license – for trying to sell multiple firearms, suppressors, and explosives, such as C-4 and a hand grenade.

Sumlin was sentenced on Sept. 11 to five years of probation. Jarvis' sentencing hearing is scheduled to take place Oct. 3.

The news of the sentencing and plea deal was first reported by Newsweek's James LaPorta.

At the time they were indicted, the two men faced considerable jail time, with Sumlin telling Newsweek that he was looking at up to 70 years in prison if all the charges stuck, but nearly all of them have been dismissed. Court records show Sumlin filed a sealed plea agreement in June; Jarvis filed his in July.

Newsweek interviewed Sumlin, as well as Brad Moss, an attorney who specializes in national security, and reviewed 15 pages of conversations posted in a secret Facebook group for EOD techs, which appeared to show that there may have been as many as six people involved in the attempted arms sale. All of which suggests that Sumlin's reduced sentence may have been because he cooperated with the government.

In other words, Sumlin may have flipped on others involved in the scheme – at least that's the thrust of the Newsweek investigation. From LaPorta's report:

“In order to spare the parties the time and expense of prosecuting the full range of charges, the defendant pleads guilty to a narrower set of the charges. That is what appears to have been done here,” explained Moss.

When asked if there was a scenario where the charges against Sumlin may have been dropped without him assisting the U.S. government in further investigations, Moss said, “Sure, if as a part of the plea deal he stipulated to a rather hefty sentence.” But given that Sumlin received only five years of probation, Moss said, “He almost certainly flipped.”

The guns for cash scheme was simple enough on its face, at least before it was foiled by the fact that the gun runners they were on their way to meet were federal agents.

Jarvis rented a Chevrolet Tahoe SUV in North Carolina and drove it to Inervess, Florida to meet Sumlin. From there, the firearms, which were separately acquired by Sumlin and Jarvis were “combined, wiped clean, and put in storage containers” before they were loaded into the truck,” as Task & Purpose previously reported.

They then drove some 1,700 miles to El Paso, Texas, where the two EOD techs, which in this case might as well stand for explosive ordnance dealers, met with their buyer at around 9 a.m on Nov. 14, 2018 in El Paso, Texas, in the hopes of swapping a truckload of guns for $75,000.

After they met with their buyers at a nearby warehouse and agreed to make the exchange Jarvis and Sumlin were promptly arrested without incident.

Upon their arrest at the warehouse, agents seized 32 rifles, three handguns, and five pounds of C4 explosives. They also seized silencers, a short barreled rifle, and a hand grenade, according to the indictment.