Top US general praises Air Force crews who rescued thousands from Kabul: ‘Nothing short of a miracle’

"You are the living embodiment of the Statue of Liberty." 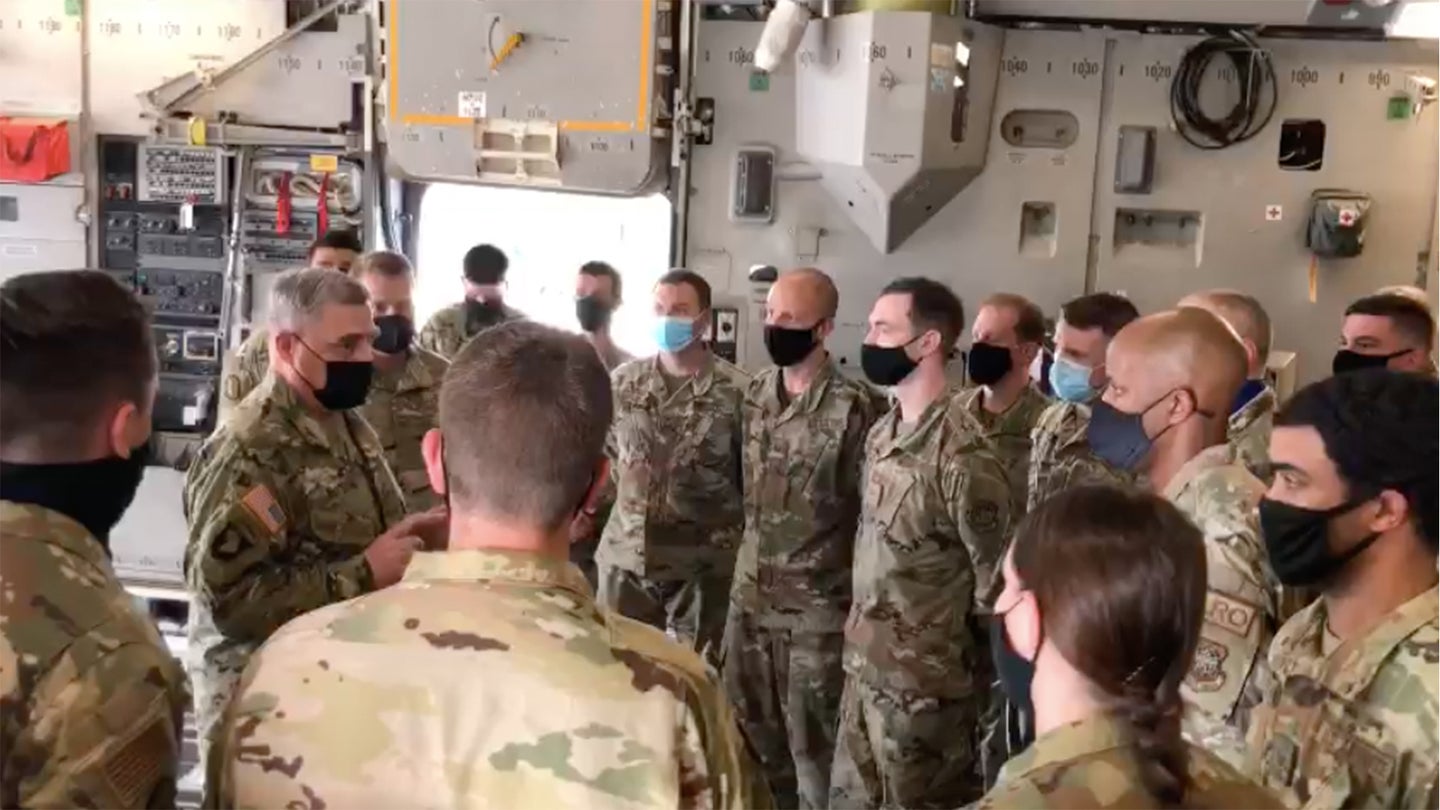 The top officer in the U.S. military gave Air Force crews a pep talk on Wednesday for their effort to evacuate 124,000 Afghan refugees out of Kabul last month. Army Gen. Mark Milley, the chairman of the Joint Chiefs of Staff, said it was the largest airlift in human history, and the airmen involved should be proud of their achievement despite “all the negativity that’s out there,” he said.

“I don’t want … any of you to think for one minute that what you did was uncoordinated, chaos and all this bullshit that I’m seeing on the news,” Milley said to a huddle of airmen aboard a C-17 Globemaster III cargo jet at Joint Base Charleston, South Carolina. “It wasn’t. What you did was remarkable. It was nothing short of a miracle, and it’s unbelievable what you did. And people can talk about the policies and all the other D.C. crap, leave that to me and Secretary [of Defense] Austin and the others.”

You can watch a video of a portion of Milley’s speech below (you may need to turn off your adblocker):

Milley’s speech comes a little over a week since the last U.S. troops left Kabul after 20 years of war. Over the last two weeks of the conflict, American airmen helped evacuate more than 120,000 Americans, Afghans and other allies through Hamid Karzai International Airport in Kabul, the country’s capital. Operation Allies Refuge was the largest airlift in history, Milley said, and it was two-and-a-half times the size of the second-largest one, which occurred at the end of the Vietnam War during Operation New Life in 1975.

The general said Allies Refuge spanned nine countries, eight time zones, and 26 or 27 temporary safe havens. Air Force aircrews connected those disparate locations through constant flights “from point A to point B,” the general said. It also gave the loss of 13 U.S. service members in a suicide bombing in Kabul on Aug. 31 a sense of purpose.

“What you just did was give 124,000 people freedom: freedom from oppression, freedom from fear, freedom from want, right?” Milley said. “That is no small achievement. And those 13 that were killed: 11 Marines, one soldier, one Navy corpsman, they died so others would remain free that they don’t even know. That’s the ultimate sacrifice. That’s the most noble thing any of us could ever do.”

Despite what Milley said, the airlift was indeed chaotic. Early on, the news cycle was filled with images of Afghan refugees crowding the runways at Kabul and clinging to the sides of Air Force jets as they took off. An evacuation plan for interpreters and other Afghans who helped Americans was not formed until the last minute, leaving tens of thousands of people in bureaucratic limbo as Taliban fighters swept across the country and the capital city. Even worse, many refugees could not make it to the airport because there were Taliban checkpoints standing outside its gates.

None of this is to discount the heroism of the Marines, soldiers and sailors who guarded the airport during the evacuation; or the bravery of the Air Force crews flying in and out with overloaded aircraft in urgent need of repair. They achieved something remarkable despite the difficult situation they were saddled with.

“Yeah, the C-17 community is burned out, never been ran this hard,” one pilot told Task & Purpose earlier this month. The pilot spoke on the condition of anonymity since he was not cleared to speak with the press. “Jets broken everywhere. But we got a lot of folks out. Hopefully, they can find better lives in the U.S. Maybe the silver lining to this whole thing.”

Air Mobility Command spokesperson Capt. Christopher Herbert told Task & Purpose earlier this month that it committed more than 230 aircraft to the effort, including C-17s, C-5 Galaxies, KC-10, KC-135 and KC-46 tankers, and C-130 turboprop transports. At one point, more than half the service’s 222 C-17s were committed to the operation, and several of these became internet-famous. One C-17 lifted a record 823 people out of Kabul in one flight. Earlier this month, an Afghan mother even named her daughter “Reach” after the call sign of the C-17 she gave birth on when it landed at Ramstein Air Base, Germany.

The crews flew with “overworn tires, offline generators, low oxygen. Just not enough manpower to keep up,” the pilot added. “Will probably take a year for maintenance to catch up on repairs and cleaning. Never seen anything like this.”

Somehow though, the 400 aircrew members who participated in the operation held it together and accomplished their mission without a single major aircraft mishap, despite the crowded airspace and limited air traffic control facilities on the ground. Caffeine was a key ingredient.

“Energy drinks were so necessary that the base completely ran out of them,” said a second pilot, about Al Udeid Air Base in Qatar. “From there it was Crystal Light Energy.”

Milley emphasized that what the crews did represented the best of America.

“Dispense with all the negativity that’s out there and know that what you did was the Lord’s work,” he said. “You look at the bottom of the Statue of Liberty, it says ‘give me your tired, your poor, your homeless: all who are trying to seek freedom, right? You are the living embodiment of the Statue of Liberty, you are what is all that’s good about America. Every single one of you all. And you just swell my heart with pride.”

The general said their work “will go down in the annals of history as something really special.” He then gave out challenge coins to commemorate the event. They’re not worth much, he said, maybe about $2.95 on eBay, but “maybe it’ll pay for your kid’s college graduation,” he joked.