An Army officer thought his service would protect his immigrant mother. He was wrong

"I cannot eat, I cannot sleep, my life is on hold." 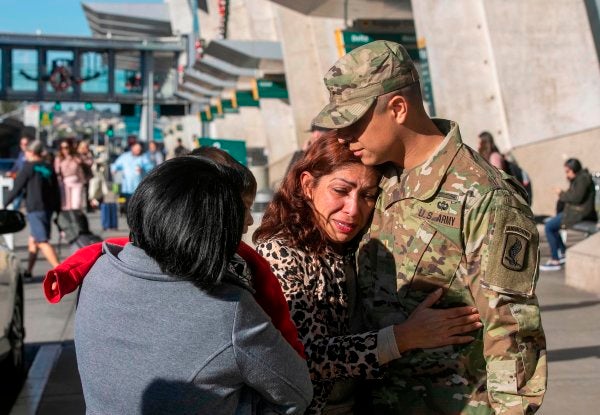 Army 2nd Lt. Gibram Cruz was among the many service members who traveled home over the last couple of weeks, but he had more in mind than celebrating the holidays.

His mother, Rocio Rebollar Gomez, is being deported back to Mexico next week after raising her three children in San Diego over the last 30 years.

Rebollar Gomez, who arrived in the U.S. in 1988, tried applying for a program that could protect family of U.S. service members, but U.S. Citizenship and Immigration Services “denied the request at the beginning of December,” per the Union-Tribune.

“The immigration laws of the United States allow an alien to pursue relief from removal; however, once they have exhausted all due process and appeals, they remain subject to a final order of removal from an immigration judge and that order must be carried out,” Immigration and Customs Enforcement told the Union-Tribune in a statement.

Rebollar Gomez is a business and home owner, per the Daily Beast, and has no criminal record. She's been removed from the U.S. three times before, coming back each time as her children were still in America.

Once, Cruz said that he and his siblings were “living out of a car” while his mother was gone.

“We found a little abandoned house and set up shop there for a little bit,” he said in an interview, according to the San Diego CBS affiliate.

Rebollar Gomez emotionally “asked for forgiveness” during an interview, according to CBS 8, but said that while she'd been in the U.S. for the last three decades she's “worked hard, always paid her taxes, and put her children through college.”

Now, she's preparing to be deported to her hometown of Acapulco, Mexico, next week. Per the Union-Tribune, Acapulco “had the third highest number of homicides in Mexico and the highest homicide rate of the country's 10 most violent cities.”

“Honestly I am worn out,” she told the Daily Beast. “I feel like my life is gone and everything I have is here — my whole life. … I cannot eat, I cannot sleep, my life is on hold.”

Cruz said he worries that his mother will be “an easy paycheck” for cartels, because of her ties to the U.S. and the military.

“How am I supposed to keep her safe?”