Syed Ali, a U.S. Army veteran once deployed in Iraq and Afghanistan, shrugged off his fearless show of self-defense during a subterranean battle last Sunday inside a Manhattan subway station 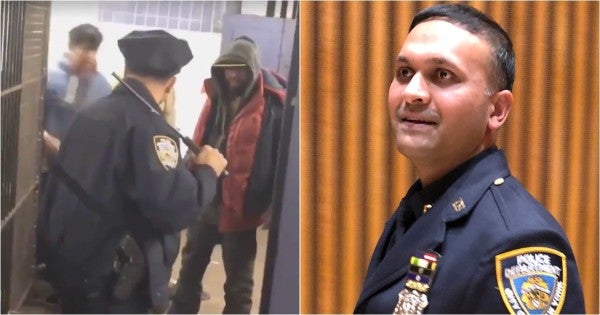 “I felt a trickle of sweat go down the back of my neck,” the cool-as-a-cucumber cop recalled Thursday. “And then it was straight-up police action.”

Ali, a U.S. Army veteran once deployed in Iraq and Afghanistan, shrugged off his fearless show of self-defense during a subterranean battle last Sunday inside a Lower East Side subway station.

The cop used only a police baton and his feet to fend off the drunken, aggressive quintet of men after they allegedly harassed a middle-aged woman. Ali, despite the overwhelming odds, recounted composing himself for a moment before making his move against the suspects.

Ali, reflecting on the confrontation captured in a viral cell phone video with more than 4 million views, explained that he never thought about reaching for his gun.

“Stand back,” he shouted instead at his attackers. “I don't want to hurt you.”

Though working without a partner in the East Broadway station, Ali said he never thought about escalating the tense situation by pulling his weapon.

“Life is precious, and going to that weapon is not necessarily the first thing that we should be thinking about,” said the Bangladeshi immigrant. “There are other tools we've been given, other tactics that we've been shown.

“And we've got to use all those resources before we go to deadly physical force.”

Shortly before Ali's news conference, cops busted a third vagrant in the incident.

Leobardo Alvarado, 31, surrendered to authorities and was charged with obstruction of governmental administration and riot in the second degree.

A pair of suspects still remain on the loose.

NYPD sources said Alvarez was previously arrested twice for tussling with cops — in December 2017 and October 2016. He threw a punch at a cop after raising his fists in a fighter's stance on Eldridge St. in the Lower East Side in the latter arrest, officials charged.

He was also nabbed for robbery roughly a year before he stood toe-to-toe with Ali, according to court records.

The five suspects were initially hospitalized for extreme intoxication and dodged criminal charges in the attack until a Wednesday meeting between NYPD officials and the Manhattan district attorney led authorities to change course, sources told the Daily News.

Ali encountered the men after a woman approached him and said a group of homeless men were harassing her. When Ali told them to leave, they began menacing him.

“I approached calmly and I told them, 'Hey, I don't care where you go but you can't be here — you're scaring our customers,'” he recalled. “Unfortunately, they didn't move in the way I expected and it turned into more of an altercation than a simple ejection.”

Cell phone video captured Ali using a baton and his feet to keep the men at bay as they came at him, one by one. One of the men fell onto the tracks. Ali may have saved the man's life by calling for MTA officials to cut power to the third rail before he radioed for backup.

“Officer Ali did a great job that night,” said Assistant Chief Executive Officer Vincent Coogan of the NYPD Transit Bureau. “He kept the situation from escalating and maybe getting worse, and it was a perfect outcome. Nobody got hurt.”

While hunting for the suspect in the Ali incident, police busted two other men in Midtown for allegedly attacking police officers. Jonathan Felix, 20, of Brooklyn, was arrested for shoving a cop near St. Patrick's Cathedral on Wednesday night.

The officer suffered a dislocated elbow and injured wrist.

And Patrick Apello, 47, of Brooklyn, was charged with attempted assault after a swing and a miss at a police officer inside a McDonald's on Eighth Ave. in Midtown. cops said.

Ali enlisted in the U.S. Army in 2000, leaving nine years later to attend graduate school on the G.I. Bill before joining the NYPD. Ali, who shuns social media, was somewhat stunned to discover his sudden cyber-stardom for just doing his job.

“I can't tell you how many guys have called from overseas to tell me, 'I just saw you on TV, what's going on?'” said Ali. “… But honestly, at that moment, I had no idea what had transpired.”