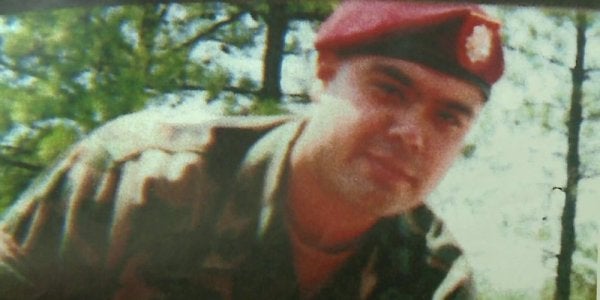 Pfc. Miguel Perez Jr. served his country honorably downrange in Afghanistan. Now, after doing time, the Army veteran is headed back not to his family in Chicago, but to a country he never called home and never served.

Perez, who moved to Chicago from Mexico with his parents when he was 8 years old, was convicted in February 2010 on drug-trafficking charge for attempting to sell more than two pounds of cocaine. A legal resident of the United States, mistakenly believed that joining the armed services would automatically grant him citizenship, according to CBS News.

After serving a seven-year stint in prison, Immigration and Customs Enforcement detained him for a new round of deportation proceedings under President Donald Trump’s stringent new immigration policy, according to The Hill.

“ICE respects the service and sacrifice of those in military service, and is very deliberate in its review of cases involving U.S. military veterans,” ICE said in a statement in December, after Perez’s case made national headlines. “Any action taken by ICE that may result in the removal of an alien with military service must be authorized by the senior leadership in a field office, following an evaluation by local counsel.”

Perez suffered a major brain injury in an explosion during the second of his two tours in Afghanistan, an incident that left him with post-traumatic stress disorder and hamstrung his ability to find stable employment — which eventually led him to sell drugs to make ends meet, according to local media reports. Perez told the Chicago Tribune that exposure to grenades and roadside bombs permanently damaged his hearing and left him with constant, excruciating headaches. Perez opted for an early discharge after failing a drug test.

“It’s a complicated case. We don’t want dangerous people to remain in this country, but we ought to have our eyes wide open,” Illinois Sen. Dick Durbin told the media of Perez’s case on Sunday. “Here’s a man who risked his life for this country. Maybe he can pay his price for what he’s done wrong here, and still get a chance to stay here.”

Perez joined the Army after 9/11, believing he was a U.S. citizen (he’s technically a permanent legal resident), and he says he served the country like it was his own. From the Tribune:

[Perez] remembers seeing the sun rise in Afghanistan on July 4, 2003. As his U.S. Special Forces unit rounded a bend toward Kandahar, he saw an American flag flying high above base camp, a beacon that he had survived the mission.

“There was a lot of action at that time,” said Perez … “I didn't think I was coming back. Just seeing the 50 stars and stripes did something to my skin. It was incredible, ecstasy, nirvana.”

As ABC News points out, President George W. Bush issued an executive order in 2002 that would allow non-citizens like Perez who served in the aftermath of 9/11 to file for expedited citizenship, an exemption for undocumented immigrants or permanent residents who have proven their commitment to the U.S. Perez’s mother, Esperanza Medina, told ABC News that her son “never formally filed for citizenship because he misunderstood the rules.”

Perez argued in immigration court that “he could be killed if he returned to Mexico,” according to ABA Journal. His lawyer, Chris Bergin, told the press that “many people with military experience like he has are recruited at gunpoint to work for the cartels and if they refuse they are killed.”

“What Miguel was charged and did a sentence for was a non-violent drug conviction,” said Rev. Emma Lozano of Chicago’s Lincoln United Methodist Church, which has come to Perez’s defense. “He never hurt anyone.”

Perez has appealed to lawmakers like Durbin and Illinois Rep. Luis Gutierrez to intervene with ICE officials and prevent his expulsion, an act of mercy for a troubled veteran. After all, said Bergin, “Miguel is basically an American in every sense of the word.”