Biden suspects toxic exposure in Iraq killed his son Beau. Now he has a plan to help other sick veterans

Joe Biden, like many other families of service members diagnosed with illnesses from overseas deployments, suspects toxic exposure may have been behind his son Beau’s brain cancer 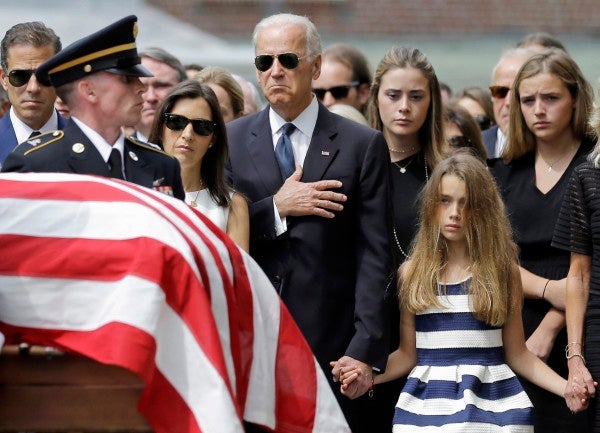 Then-Vice President Joe Biden, accompanied by his family, holds his hand over his heart as he watches an honor guard carry a casket containing the remains of his son, former Delaware Attorney General Beau Biden, into St. Anthony of Padua Roman Catholic Church in Wilmington, Del., June 6, 2015, for funeral services. Beau Biden died of brain cancer May 30 at age 46.
SHARE

Joe Biden, like many other families of service members diagnosed with illnesses from overseas deployments, suspects toxic exposure may have been behind his son Beau’s brain cancer.

Beau Biden boarded a military aircraft for Iraq on Nov. 19, 2008, just days after his father became vice president-elect. He deployed with the Delaware Army National Guard to Balad Air Base, where the U.S. military burned an estimated 140 tons of waste a day in open air burn pits.

In a 2019 speech to the Service Employees International Union, Biden said because of Beau’s “exposure to burn pits, in my view, I can’t prove it yet, he came back with stage four glioblastoma. Eighteen months he lived, knowing he was going to die.”

For thousands of veterans who have also been struck by cancer after being exposed to the burn pits or other toxins while serving overseas, it’s Joe Biden’s personal loss that makes them hopeful they may finally get the help they need.

“President-elect Joe Biden has made clear that our nation’s most sacred obligation is to take care of the members of our military and their families, when they’re deployed and when they return home,” Cruz said.

Biden’s plan “includes expanding the list of presumptive conditions to include exposure to burn pits or other environmental toxins, and increasing research dollars by $300 million to invest in better understanding the impact of [traumatic brain injury] and toxic exposures.”

Despite years of data and more than 200,000 veterans who served in Iraq, Afghanistan and other bases throughout the Middle East who have reported cancers, respiratory illnesses or neurological health problems to the Department of Veterans Affairs, many of their claims continue to be denied.

The VA still says there is not enough evidence to determine that the contaminants the service members were exposed to overseas are the cause of their illnesses when they return home.

Rosie Torres founded the toxic exposure advocacy group Burn Pits 360 after her husband, retired Army Capt. Le Roy Torres, came home with a debilitating lung disease after a deployment to Balad Air Base in Iraq from 2007 to 2008. The base, like hundreds of others in Afghanistan and Iraq, had multiple areas for disposal of metals, human waste, ammunition, trash that were burned with jet fuel.

Service members assigned to those bases were exposed to harmful particulates from the burn pit smoke on a daily basis.

Torres and a coalition of veterans advocacy groups are pushing for the VA to approve the illnesses as presumptive conditions, which would take away the burden currently on veterans to prove their cancers or other conditions are connected to their military service to have their treatments covered by the VA health system.

“[Biden] lost his son who was deployed to a base where many others died from the same illness,” Torres said. “I feel like this would be his way of honoring Beau.”

But for years, including when Biden served as vice president in the Obama administration, help for those veterans has been pushed back as the VA has said it required more study to determine a service connection.

Veterans say they are done waiting.

“We are overdue,” said Jeremy Butler, chief executive officer of Iraq and Afghanistan Veterans of America (IAVA). “It’s just like with K2, where it’s been 20 years, and they’ve got nothing, no health care, no response from the government.”

K2, or Karshi-Khanabad, is a former Soviet base in Uzbekistan where U.S. special operations forces were sent just weeks after the 9/11 attacks.

Last year, McClatchy reported that the Pentagon knew the as early as 2001 that the base had remnants of processed uranium, pools of fuel and solvents, and remnants of chemical weapons. Hundreds who served there have been diagnosed with cancer.

More than two dozen veterans organizations have formed a coalition to raise awareness on toxic exposure and drive legislation. They have a high-profile champion in comedian Jon Stewart, who has promised to keep the issue front and center until those veterans get the help they need, much like he did with the 9/11 first responders at the World Trade Center in New York.

IAVA’s Butler said the group is focused on getting one broad piece of legislation through Congress next year that addresses all toxic exposure.

Multiple lawmakers this year filed bills to help segments of veterans, such as legislation specifically to help K2 veterans, bills to address burn pits and presumptive conditions, and other bills focused on military pilot cancers.

But the COVID-19 pandemic, the 2020 election and the Supreme Court vacancy has made it likely that those individual legislative efforts will wait until the next session of Congress, Butler and Torres said. The bills sometimes have competing points of emphasis or congressional support which “ultimately means nothing gets done,” Butler said.

The groups had planned to hold a Veterans Day rally on Capitol Hill on Wednesday with Stewart to draw more attention to the issue, but new COVID-19 related restrictions in the District of Columbia prevented it from taking place.

“Our goal is to go into 2021 with a renewed focus,” Butler said. “The fact we now have President-elect Biden is going to make it a lot easier to get something done. He is someone who understands in a way few civilians do.”

Related: How the VA is failing to track veterans burn pit claims