When It Comes to Burn Pits, Veterans Might Be On Their Own 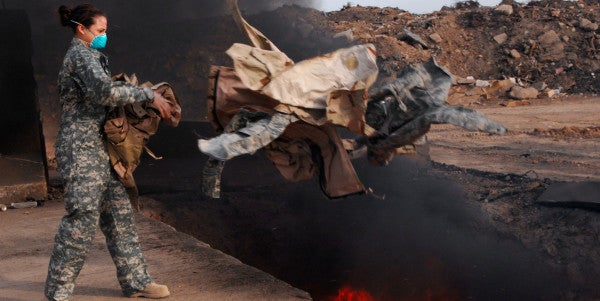 By now you’ve probably heard of former Marine and Army Sergeant Joseph Hickman’s new incendiary book, “The Burn Pits: The Poisoning of America’s Soldiers.” It’s a provocative look behind the massive burn pits of Iraq and Afghanistan, detailing a chilling history of sickness and systemic neglect from higher ups.

If you’ve never heard of burn pits before, the name reveals everything. Instead of using more expensive incinerators to dispose of waste, everything from “tires, lithium batteries, asbestos insulation, pesticide containers, Styrofoam, metals, paints, plastic, medical waste and even human corpses,” according to Hickman, were thrown into holes in the ground and set on fire.More than 250 burn pits were in operation during the past decade, spewing toxic fumes into the lungs of service members and civilians alike. The Department of Defense has said that each pit on larger bases burned on average 30 to 40 tons of solid waste per day. Hickman asserts that the health effects were so dangerous that they were even passed down through the generations, writing in his book, “The rate of having a child with birth defects is three times higher for service members who served in those countries.”

Hickman’s account is probably the most thorough and expansive take on burn pits so far, going so far as to implicate KBR, who ran the burn pits, and Gen. David Petraeus, who initially denied that burn pits were harmful. But it isn’t the first attention that’s been paid to the phenomenon. Journalists have been writing about the burn pits for years. There have been multiple television specials about the burnpits. Hickman even makes the allegation that Beau Biden, the vice president’s son, might have died because of cancer caused by exposure to burn pits.

Surprisingly, none of this has translated into organized political action on behalf of veterans. If anything, things have actually gotten worse in the past year. Despite a VA survey conducted in 2014 released report in 2015 which found that veterans exposed to burn pits have higher new diagnoses of respiratory illnesses and high blood pressure than veterans not exposed, the Department of Veterans Affairs still denies any connection between burn pits and health issues. In fact, its website says, “At this time, research does not show evidence of long-term health problems from exposure to burn pits. VA continues to study the health of deployed Veterans.”

Granted, it can sometimes be difficult to prove causal relationships when researching environmental health effects. Difficult, but not impossible. But it does become impossible to prove a relationship when those studies cease altogether. Unfortunately, that’s exactly what happened when Congress dropped burn pit research from its list of the Pentagon’s peer-reviewed research programs for 2016. No one else was researching this. Anthony Hardie, director of Veterans for Common Sense, said, “There’s nothing comparable. There’s very little research inside the [Department of Veterans Affairs].” Without the proper research explicitly linking the burn pits to symptoms, veterans are going to have a hell of a time receiving compensation, much less an official mea culpa from the DoD.

We’ve been through this before. It took nearly a decade of legal wrangling in order for veterans exposed to Agent Orange — the defoliant sprayed during the Vietnam War and which was found to cause “cancer, birth defects, and a nightmarish brew of other health problems” — to receive compensation. Even then, that was part of a settlement outside of court with the corporations who produced the chemical. Despite a series of class-action lawsuits, there’s been no legal admission of wrongdoing on anyone’s part. The companies that manufactured the chemical (mostly Dow and Monsanto) continue to maintain their innocence. Jill Montgomery, a Monsanto spokesperson, said on behalf of the company in 2004, “We are sympathetic with people who believe they have been injured and understand their concern to find the cause, but reliable scientific evidence indicates that Agent Orange is not the cause of serious long-term health effects.” The out-of-court settlement was pathetic: A maximum of $12,000 spread out over the course of 10 years (acceptance of which would render most veterans ineligible for other state benefits) and widows of veterans who died of Agent Orange exposure only receiving $3,700.

So what’s the answer for today’s vets? Politicians love to pay lip service to supporting the troops, at least until it comes time to cut checks or investigate corporations. How do we convince them to act, to pass legislation banning burn pits (they’re still used in Afghanistan) and compensating veterans? There’s the legal route, of course, and there is currently class-action lawsuit filed against KBR, but as we saw with Agent Orange, the compensation could be negligible and it might be settled out of court, which would mean no admission of wrongdoing on anyone’s part (and still no peer-reviewed research).

What veterans should remember is that we’re our own best advocates. If we work together to collectively continue pressing an issue, it stands a much better chance of seeing the light of legislative day. It shouldn’t come as a surprise that there already is at least one group out there, Burnpits 360°, founded by a veteran, who is working toward establishing “an alliance of veteran service organizations, health care providers, legislators, and government organizations to allow for the strategic development of a quality specialized health care model specific to toxic environmental exposures that will provide a lifetime of care.”

Those goals might sound lofty, but they shouldn’t. As veterans, it’s incumbent upon us to come together to, organize, write, advocate, and keep pressing on behalf of our battle buddies for what is really a modicum of respect. We shouldn’t count on anyone else to do it for us, because, just like downrange, we’re all we got.