Every day in Afghanistan in 2011, Spike the black Labrador retriever had the important job of detecting explosives and clearing... 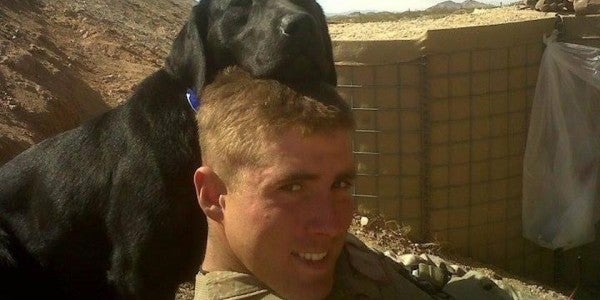 Every day in Afghanistan in 2011, Spike the black Labrador retriever had the important job of detecting explosives and clearing daily patrol routes. But Spike did more than just find improvised explosive devices before they could kill and maim U.S. troops; he also served as a loyal best friend and morale booster for his handler, Lance Cpl. Jared Heine.

The pair was inseparable. They slept in the same bunk and greeted Heine’s mother together via Skype. “We were just like brothers,” Heine told Richmond Times-Dispatch reporter Jim Nolan. “We were like one person.” They were also inseparable on hazardous missions, including the three times they triggered IED explosions.

Wounded in the last explosion, Heine returned home with a Purple Heart, but not Spike. Seeing that her son was struggling with post-traumatic stress disorder, Heine’s mother turned to the Internet to try to track down Spike in the hope of reuniting the pair.

Her search ended with the Virginia Capitol Police and 27-year-old K-9 Officer Laura Taylor. Like Heine, Spike is the first and only dog she has partnered with in uniform. They had been together nearly nonstop, on duty and at home for two years as both friends and colleagues. “He never lets me down – he’s what I depend on and has always been there,” Taylor said in an interview with the Richmond Times-Dispatch. “I can’t explain how much he means to me.”

Last week, the two lives of Spike formally converged outside Virginia’s state capitol building in Richmond. Heine, who had traveled from Louisiana for the reunion, approached Spike for the first time in three years. “Right when he got next to me he knew it was me … It was like we didn’t skip a beat,” he told CBS News, which aired video of parts of the reunion.

Taylor’s eyes filled with tears and her body shook as she watched the unshakable bond between two old best friends. “My knees were wobbly,” she told the Richmond Times-Dispatch. “It was emotional.”

She then informed Heine that she and her superiors intend to retire Spike in a month. Since the first handler has the option to keep a retired military dog, that means Spike will be reunited with Heine permanently.

Although reluctant to give up her best friend, Taylor knew Heine needed Spike more than she did. “He’s more important to me than anybody else can know, but we have to do what’s right for the whole situation,” Taylor told CBS News.

Then it was Spike’s turn to watch as Heine embraced a teary-eyed Taylor. She had one request: “Just take good care of him.”

“I promise I will,” Heine replied.