The March 9 shooting of Anthony Hill, who is black, at his apartment complex in Atlanta, Georgia, by white police... 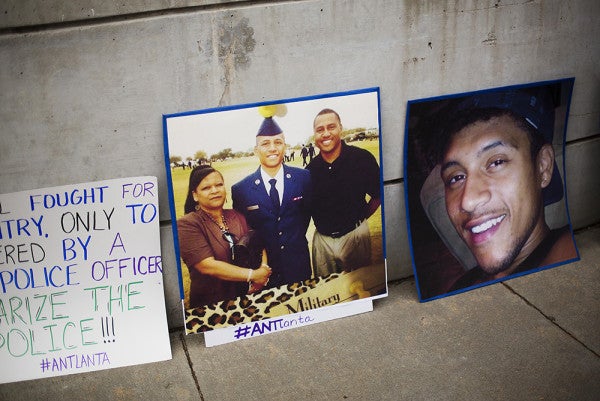 The March 9 shooting of Anthony Hill, who is black, at his apartment complex in Atlanta, Georgia, by white police officer Robert Olsen, has become another story in the growing national movement questioning the relationship between law enforcement and race. A recent New York Times article by Richard Fausset provides a far more nuanced view of Hill’s tragic death.

An Air Force veteran who deployed to Afghanistan and was reportedly battling with mental illness, Hill was open about his condition. Accounts from friends, family, and those in his community portray a man who sought to embody the words tattooed on his chest — be sensible. He engaged in the national discussion on race and use of force by police, advocating against violent protest in the wake of Michael Brown’s shooting in Ferguson, Missouri.

“If 99 of 100 officers” were on the streets “killing black men like its hunting season,” he wrote on Christmas eve “that still leaves 1 just doing his job. Stop w/ the generalizations.”

Now he himself is dead, another unarmed black man killed by the police. Hill was allegedly ignoring commands from the officer to stop, but he was irrefutably unarmed — he was naked — and the officer was reportedly equipped with a taser.

“To come home from Afghanistan and be killed by someone who’s supposed to protect you – that I don’t understand,” Hill’s brother told the New York Times.