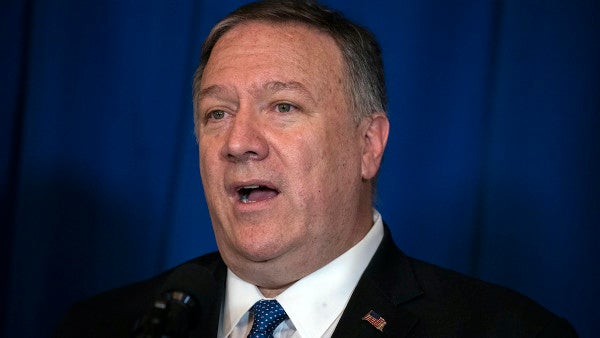 Secretary of State Mike Pompeo on Friday declared the world “a much safer place” following the death of top Iranian general Qassim Suleimani — just as the State Department urged Americans in Iraq to leave the country immediately out of fear of retaliation from Iran.

Suleimani — the revered head of the Iranian Revolutionary Guard Corps and Tehran's top shadow commander in Iraq — was killed by U.S. air strike at Baghdad International Airport on Friday morning.

“The world is a much safer place today,” Pompeo told reporters on Friday. “And I can assure you that Americans in the region are much safer today after the demise” of Suleimani.

Pompeo may believe the world is objectively safer, but his State Department isn't taking any chances.

“Due to heightened tensions in Iraq and the region, the U.S. Embassy urges American citizens to heed the January 2020 Travel Advisory and depart Iraq immediately,” the U.S. Embassy in Baghdad said in a Friday security alert.”U.S. citizens should depart via airline while possible, and failing that, to other countries via land.”

“Due to Iranian-backed militia attacks at the U.S. Embassy compound, all consular operations are suspended,” the State Department added in an additional alert. “U.S. citizens should not approach the Embassy.”

Iran has threatened retaliation over the strike against Suleimani, which the Pentagon characterized as a “decisive defensive action to protect U.S. personnel abroad” in the aftermath of the New Year's Eve assault on the U.S. Embassy in Baghdad.

Suleimani “has killed or badly wounded thousands of Americans over an extended period of time, and was plotting to kill many more,” President Donald Trump tweetedon Friday. “He should have been taken out many years ago!”