“This shows the desperation of Afghans trying to escape the Taliban." 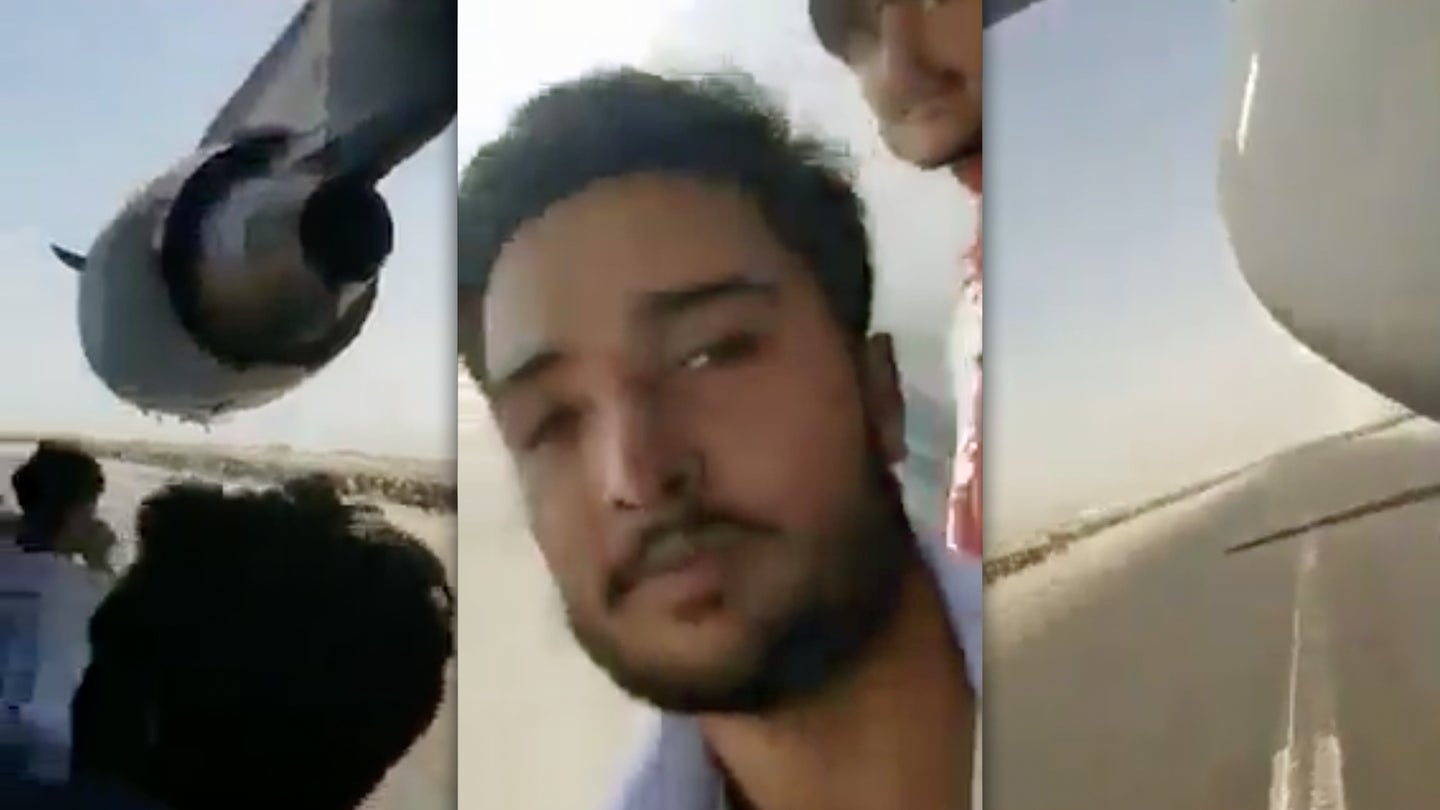 After Kabul fell to the Taliban on Sunday, Afghan civilians swarmed the tarmac at Hamid Karzai International Airport and clung to the tops and sides of airplanes in a desperate attempt to flee. Hundreds were seen on video running alongside an Air Force C-17 transport as some tried to hold on to the landing gear. Now, a video has emerged of a man who appears to have filmed himself on the side of one such aircraft shortly before takeoff.

“This shows the desperation of Afghans trying to escape the Taliban,” said Matt Zeller, a U.S. Army veteran and advisor to the Association of Wartime Allies, a nonprofit advocacy group helping to assist Afghan interpreters.

The nearly two-minute-long video shows at least 10 people riding on the right side of a C-17 aircraft. The man who shot the video turned the camera back toward himself and another Afghan as they stood on what Air Force service members refer to as “the hump” on the transport plane, which closes behind the retracted landing gear once airborne.

“This is not a Hollywood movie stunt,” wrote Sudhir Chaudhary, an Indian journalist who shared the video on Twitter. “This is an Afghan man with several others clinging to an aeroplane to survive the war and to cross the border at any cost. I don’t know if he survived.”

The Afghans on the hump pass by throngs of civilians lining the runway. Some of the men wave and yell in Pashto as the aircraft slowly taxis. Eventually, the aircraft’s four turbofan engines spin up and the plane picks up speed before the video ends. “It will fly and throw us away,” one man can apparently be heard saying in Pashto.

You can watch the video below:

An Air Force official did not immediately respond to Task & Purpose to answer whether this particular aircraft was American. But in another widely-shared video, an Air Force C-17 aircraft based out of Joint Base Lewis-McChord in Washington was seen on the ground in Kabul on Sunday with hundreds of Afghans running alongside and about ten men visible standing on the “hump” of the landing gear.

The C-17 had landed at the airport earlier in the day with a load of cargo and was rushed by hundreds of Afghan civilians, according to an Air Force official, who said at that point, the crew decided to fly away to safety.

“Faced with a rapidly deteriorating security situation around the aircraft, the C-17 crew decided to depart the airfield as quickly as possible,” said Ann Stefanek, an Air Force spokesperson.

Afghans later saw between three and four people fall from the plane, some of whom crashed into houses near the airport. Human remains were also found inside the wheel well of the C-17 after it landed at Al Udeid Air Base in Qatar, Stefanek said. The Air Force is investigating the incident.

We may never know who this man was or what ultimately happened to him, but it’s clear he was one of many Afghans desperate to leave their home country now that the Taliban have taken control. Militants have set up checkpoints inside and outside of Kabul, making it more difficult and dangerous to travel. Yet Pentagon officials say the airport has been secured and airlift flights should ramp up with an estimated 5,000 to 9,000 people being flown out each day.

The Biden administration estimated that it needed to evacuate roughly 70,000 Afghan visa applicants and their families, Rep Seth Moulton (D-Mass.) told Task & Purpose in June. Only about 1,200 have been rescued so far.

“I know there are concerns about why we did not begin evacuating Afghan civilians sooner,” President Joe Biden said Monday. “Part of the answer is some of the Afghans did not want to leave earlier, still hopeful for their country, and part of it is because the Afghan government and its supporters discouraged us from organizing a mass exodus to avoid ‘triggering,’ as they said, a crisis of confidence.”