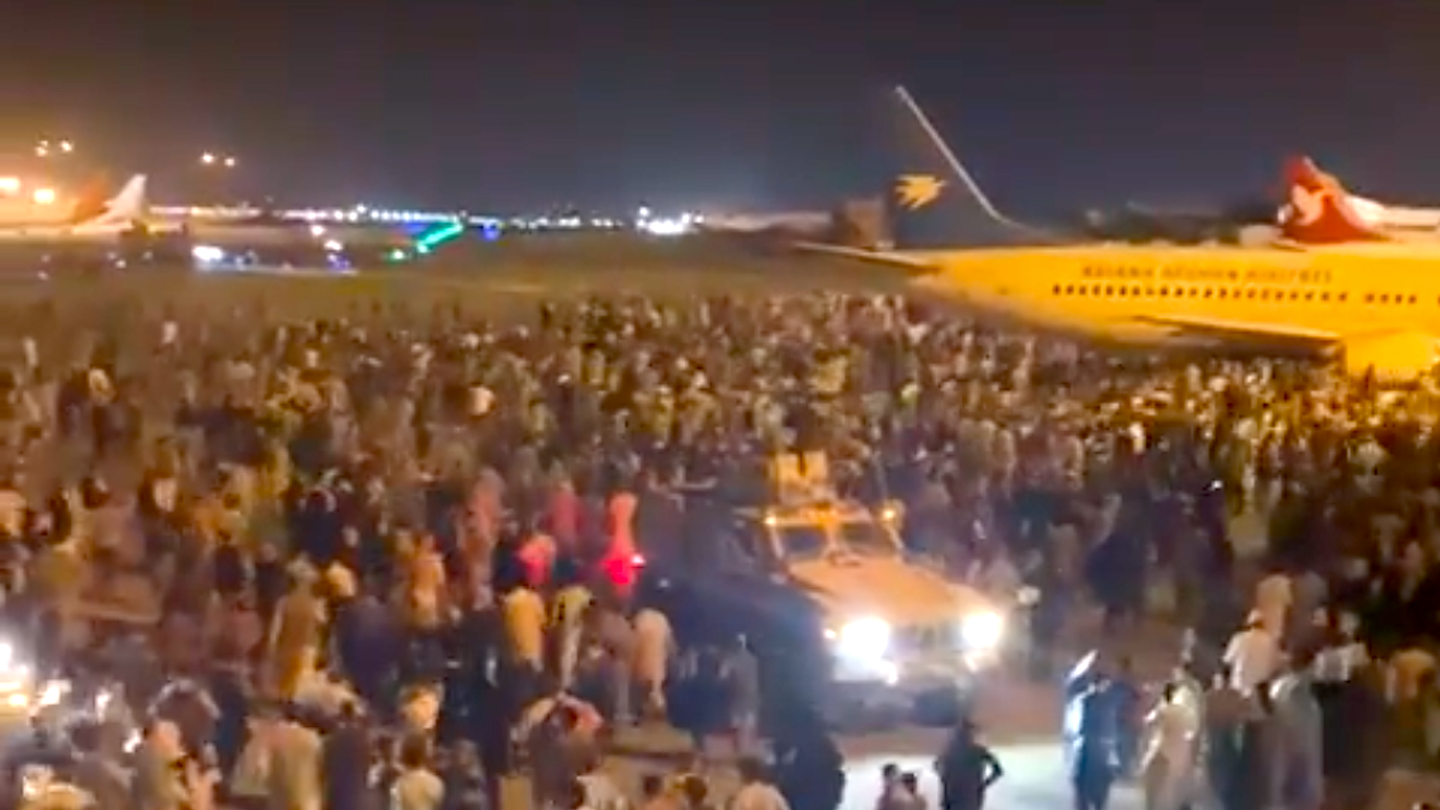 The scene at Hamid Karzai International Airport in Kabul has devolved into chaos as both Afghan and foreign nationals seek to flee Afghanistan amid the Taliban’s violent campaign to reclaim the country.

The Taliban captured Kabul on Sunday as former President Ashraf Ghani fled to neighboring Tajikistan, leaving Taliban fighters to occupy the presidential palace and mark the return of the Islamic Emirate of Afghanistan almost exactly 20 years after the United States initially invaded the country.

While President Joe Biden has ordered another 1,000 troops to bolster the roughly 5,000 U.S. troops already a the airport to help evacuate Americans who work at the Kabul embassy and some Afghans who have applied for visas, the U.S. embassy in Kabul warned on Sunday that the airport had come under fire amid the Taliban’s push into the city.

“The security situation in Kabul is changing quickly including at the airport,” the embassy said in a statement. “There are reports of the airport taking fire; therefore we are instructing U.S. citizens to shelter in place.”

For Afghans, the prospect of getting a flight to another country is virtually non-existent for the foreseeable future. While Secretary of State Anthony Blinken has claimed that the evacuation from Kabul is “not Saigon” the U.S. government is once again leaving a country as tens of thousands of people in the capital are terrified of retribution from the new regime.

One Kam Air flight was apparently unable to take off because hundreds of people tried to board it:

Now all commercial flights into and out of the airport are suspended to make way for military aircraft, Reuters reported on Sunday.

“The runway of the airport was filled with a constellation of uniforms from different nations,” the New York Times reported. “They joined contractors, diplomats and civilians all trying to catch a flight out of the city. Those who were eligible to fly were given special bracelets, denoting their status as noncombatants.

Others, however, were not so lucky, and video footage posted on social media shows desperate travelers flooding the tarmac:

Despite the panic that has engulfed the country in recent weeks, the Biden administration has held fast to its decision to rapidly withdraw U.S. forces from Afghanistan amid the worsening security situation there.

“When I became President, I faced a choice—follow through on the deal, with a brief extension to get our Forces and our allies’ Forces out safely, or ramp up our presence and send more American troops to fight once again in another country’s civil conflict,” Biden said in a statement on Saturday prior to the Taliban’s march on Kabul. “I was the fourth President to preside over an American troop presence in Afghanistan—two Republicans, two Democrats. I would not, and will not, pass this war onto a fifth.”