The Video Of UFO Attacking A Taliban Encampment Is Fake

Update: I called it! One of our readers posted the original video to our Facebook page. JDAM Strike. Iraq. Likely... 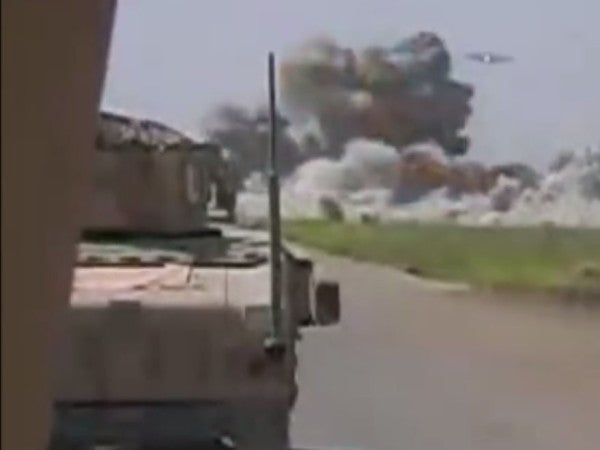 Update: I called it! One of our readers posted the original video to our Facebook page. JDAM Strike. Iraq. Likely from a Harrier or F-15. Check it out here. Nice try, alien impersonators.

Is the war in Afghanistan not only an international effort, but an intergalactic one?

That’s what multiple news outlets would have you believe about a recent YouTube video purporting to depict a UFO destroying a Taliban encampment. I believe there is intelligent life out there in the universe, and I believe if they visited earth, they would hate the Taliban, but this is faker than that guy pretending to be an Army ranger.

The video shows a triangular aircraft slowly gliding in front of a convoy before shooting something and causing a really big boom.

The video says it was filmed a few days ago by U.S. Marines is Asabadad, Afghanistan.

First of all, those are humvees in the video, which aren’t used in combat operations in Afghanistan anymore. U.S. forces, particularly Marines, like the video claims to show, use Mine Resistant, Ambush Protected vehicles, called MRAPs.

Lastly, Afghanistan is some of the busiest airspace in the world. Coalition forces fly drones, helicopters, fighter jets, and cargo or transport aircraft at an incredible pace. Had an extraterrestrial aircraft slipped in there, I think it would have been noticed by a few million people from nearly 30 different nations.

The other theory is that this is some top-secret drone technology. Huffington Post guessed it might be an X-47B, in an indication of how little that author understands about the drone program. The X-47 is an experimental Navy research aircraft designed to test drones’ ability to land on carriers. It doesn’t carry weapons and is sea based.

My bet is that this is an old video of an airstrike in Iraq and someone edited in that crazy spaceship.

Check it out below and let us know what you think in the comments.