An Afghanistan Veteran Calls Out ISIS

Something about a headline that reads the Islamic State of Iraq and Syria invades Afghanistan, or ISIS takes another city... 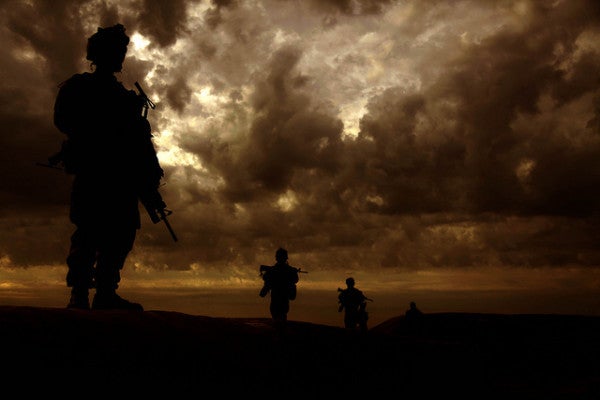 Something about a headline that reads the Islamic State of Iraq and Syria invades Afghanistan, or ISIS takes another city in Iraq, rankles me and sets my teeth on edge. The reason is pretty simple: As a veteran of the war in Afghanistan, the emergence of ISIS anywhere makes me feel like we failed.

When ISIS fighters run amok, killing with impunity — in the very places where our brothers and sisters fought and died to prevent that exact thing from happening — it is an indictment of the wars we fought.

In 2008, I enlisted in the Marines as a combat correspondent in order to cover war and pretend to be Pvt. Joker from “Full Metal Jacket.” I deployed twice to Afghanistan with 1st Battalion, 6th Marines; first during the insert into Marjah in 2009 and again in 2011 to Sangin and Kajaki Sofla.

While overseas, there was an undeniable sense of purpose, but more than that, I felt invested in the outcome. The war was underway and we owed it to the American public, to ourselves, and to the civilian populace in Afghanistan to see the fight through.

But as I sit here now and read the news coming out of that corner of the world, it doesn’t feel like we made it better, does it? Not when the Afghan National Army is facing its heaviest casualties of the war. Nor does it bode well when Iraqi soldiers drop their weapons and flee ISIS. And now the militant group is allegedly recruiting in Helmand province, the Marine Corps’ old stomping ground.

It feels like a challenge, and I know I’m not alone when I say, “Bring it.” But, we can’t fight them anymore, can we? We’re not there anymore, not in force anyhow. America’s wars are over, and some would argue that it is for the best, but that doesn’t change how I feel about the battles that are still raging.

As a nation, we ended the wars in Iraq and Afghanistan with a bad taste in our mouth, and we seem to have adopted a “never again” attitude toward ground conflict in the Middle East. Like it or not, we are at least somewhat responsible for what happens in the lands where our friends and family members served, fought, and died.

It wasn’t the climactic, headline-grabbing end of an era, like the fall of Saigon at the close of the Vietnam War. It didn’t end with a bang, but slipped by and bled into the background. But, the fighting doesn’t stop just because we quit talking about it, and neither should our sense of responsibility.

As veterans, we are forever connected to the dusty roads, to the farmland that turns into a quagmire after it rains and sucks the boots off your feet or breaks your ankles when dry. The way the barren trash-littered alleyways of cities juxtapose with vibrant markets full of life and color. The little kids playing soccer on barren scraps of land. The landscape, the towns, and the people have become a part of me, and I imagine this is true for quite a few of my fellow veterans.

We pitched our tents and planted our flags in Iraq and Afghanistan. We took a stand and though the decisions leading up to, and during, those conflicts may have been questionable, we made a choice and invested $4 trillion of the taxpayer’s money and suffered nearly 7,000 American deaths between the two wars.

When I see their sacrifices give way to black-clad men with gleaming knives executing aid workers and journalists, it causes me to ignore my better judgement and instead long for ISIS militants to be put down in a hail of lead.

I’m not advocating another fight in the Middle East because I think its a good decision — this is purely personal. This doesn’t have to do with sound politics, or what’s good for our nation at this time, or what sounds the best in a televised address.

I’d like to see a change in the news and social media feeds: No more “ISIS sweeps through name a place.” How about “ISIS hits brick wall called the US Military.” And who doesn’t want to see these genocidal dickbags try to take a fixed position from a Marine Corps infantry platoon? Let’s see them steamroll through that shit. Or watch them go toe to toe with some Green Berets? Or see their Ford “Danger” Rangers outrun a cruise missile.

I’m calling you out, ISIS. You troglodytes and your ilk give a bad name to the countless peaceful and compassionate Muslims the world over. You’re an amorphous and disembodied mass that sells war like sex to the depraved and disillusioned. You hide in digital back alleys and coerce the naive and lost. You take all comers, so long as they commit violence in your name. And you’re getting away with it. For now.

But, your number is nearly up, and though it’s unlikely that American ground forces will be the ones to do it, others are willing to stand up to you. You have helped form an unlikely coalition, and with luck, they will hold together long enough to put a stop to you.