The Hard Calculus Of Immorality And Conflict

Air Force Gen. Curtis LeMay said of the 1945 bombing of Tokyo, “Killing Japanese didn't bother me very much at... 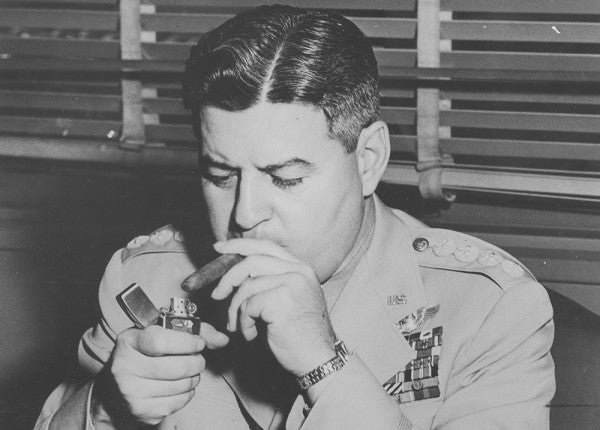 Air Force Gen. Curtis LeMay said of the 1945 bombing of Tokyo, “Killing Japanese didn't bother me very much at that time … I suppose if I had lost the war, I would have been tried as a war criminal … Every soldier thinks something of the moral aspects of what he is doing. But all war is immoral and if you let that bother you, you're not a good soldier.”

More recently, former Vice President Dick Cheney said of the war on terrorism,”We also have to work, though, sort of the dark side … That's the world these folks operate in, and so it's going to be vital for us to use any means at our disposal, basically, to achieve our objective.”

So, does that mean that any behavior in war is justified, as long as it brings victory, or at least appears to? Ask around your fellow veterans, or god forbid, Internet discussion boards, and you’ll find some frightening ideas on solving America’s strategic problems that are less “good solution” and more resemble the “Final Solution.”

Should such things as intentionally bombing civilians or torture ever be part of U.S. war plans? Don’t worry, this isn’t going to be a discussion of international law, which, by the way, answers a resounding “No!” on both questions. This is a matter of morality, and who we are. Unfortunately, the moral calculus of war is one that’s unclear and situationally dependent.

It would be easy to say that bombing civilians is always morally wrong, but that’s not always the case. Even today, with precision munitions, civilians frequently become collateral damage, because the enemy, whether terrorists or insurgents, is often mixed with the populace. We’d like to think that this is part of something new, but military targets usually are mixed in with the population, even in traditional nation states.

Military bases are often inside cities. Industrial targets almost always are. During World War II, for example, the fact that bombing a population center could plausibly be explained as striking a military or industrial target inside took the Allies down the path toward bombing the workers themselves and then toward striking civilians only because it was thought to weaken the enemy regime.

The question isn’t, “Is it immoral to kill civilians?” Of course it is. That question doesn’t get us anywhere. The question is, rather, “Is there anything else that could be done?” If there is a viable alternative, it has to be considered. It becomes a raw mathematics of evil, and in war everything is an evil to a greater or lesser degree.

In the early days of the campaign against Germany, there wasn’t much that could be done against the Reich besides bombing it. In the closing days of the war, the decision between using the atomic bomb and invading the Japanese home islands was simple, if not easy.

Today we do have alternatives, such as precision-guided munition strikes, which were not available during World War II. We’re not dealing with questions of demolishing entire cities. We’re asking, “Is this suspected terrorist worth killing the civilian family next door?” Morally, the answer has to be, “Sometimes, but not always.”

Oddly, the moral calculus is harder, not easier as the scale gets smaller. When a war is not an existential fight between nations, morality almost becomes a question requiring mathematical precision, but wherein the actual variables are known in only rough approximations. How many American soldiers is an innocent civilian living in a hut somewhere worth? Depending on the political bent of the person answering, you’ll hear numbers from zero to infinity. The hard truth is that the answer is definitely more than zero; the ethical answer is that sometimes American lives need to be put at risk in order to avoid harming noncombatants. That is where leadership comes in — doing the right thing is rarely the easy thing.

War itself is immoral. That isn’t a blank check for immorality. Especially for a nation like the United States; if we break the ideals of our founding, then we lose our reason for fighting in the first place.

If we have an alternative to doing something morally questionable, we have to take it, lest we win the war but lose our souls.