It’s a common phrase: the Profession of Arms. I remember taking the oath of affirmation the day before starting my... 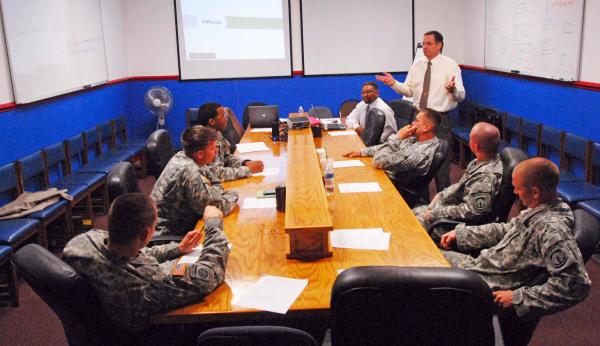 Back in August 2004, much of the Army’s understanding of what that phrase meant and represented was largely unwritten. We understood that the nature of the Army profession required specialized and unique skills, a moral and ethical framework and code of conduct, continuous training and education, self-policing, shared identity, and offering a valuable service. We understood that working within a profession required significant amounts of trust — trust between members, between subordinates and leaders, and between the profession and the remainder of the population.

These ideas, primarily existing within the culture of the Army, were not formally codified. However, the evolving nature of the Army, as well as the society from which we recruit, required the formalization of the Army Professional Ethic in Army Doctrine Reference Publication 1, in June 2013, and was most recently revised in June 2015. Despite the great strides and efforts in codifying and publishing these ideas, they still require more work to reach the desired end state, which is the acceptance and application of these principles by all soldiers.

Culture is difficult to control in an organization as large in terms of personnel — both soldiers and civilians — and geographically separated as the Army. Individual leaders can also influence culture based on selective enforcement or interpretation of unwritten social norms, prompting the formalization of our best understanding of the Army professional ethic. Another significant evolution in society, the amplification of individual voices through social media, is a large driver in the need to ensure every last soldier understands what it means to be a part of a profession and has enough pride in that fact to model their personal conduct appropriately. The regulations that guide the conduct of soldiers, to include those punitive regulations under the Uniformed Code of Military Justice, have always clearly applied both on and off duty, in and out of uniform. However, the increasing amount of online interaction has blurred the lines, at least in the eyes of some, between personal and professional lives, between freedom of speech and standards of professional conduct. Increasingly, soldiers have found themselves on the wrong side of professional conduct while trying to make statements online, from avoiding saluting the flag, to disrespecting military funerals, or criticizing the president. It was the innumerable statements made on public Facebook pages that are contrary to the Army’s sexual harassment or equal opportunity policies or just generally unprofessional that led to the controversial awarding of the Army Commendation Medal to 1st Sgt. Katrina Moerk for her efforts to correct unprofessional behavior online. Agree with the award or not, all of these examples clearly demonstrate a gap between what soldiers think is professional conduct and what the Army expects as professional conduct.

Codifying what it means to be a part of a profession, explaining the relationship between trust and effectiveness and how that trust is impacted by our decisions, ethical or otherwise, emphasizing the importance of esprit de corps,and how that helps increase commitment to professional conduct — these are all important things that Army Doctrine Reference Publication 1 has done. But that was the easiest part, largely an academic exercise in researching psychological and organizational behavior concepts and applying them within an Army framework. The real work is getting everyone to read, understand, and accept it. As written, it is dry, highly redundant, and layered. The definitions of character, competence, and commitment are somehow presented as a component of certifying, which is nested within the Army Professional Ethic tenet of military expertise. But character is also a component of trust and honorable service, while commitment is also a component of esprit de corps.

It presents circular logic; for example, honorable service, a component of the Army’s professional ethic, is defined as “support and defense of the Constitution, the American people, and the national interest in a manner consistent with the Army Ethic.” It’s like saying that the rule of law, a component of justice, is rightful or lawful judgements made within the bounds of justice. Issues like this will deter readers if they pick up the publication in the first place. Overall, however, what ADRP 1 lacks is a coherent strategy or program for promoting professional behavior, which largely falls back to individual leaders who will naturally have varying levels of success understanding the doctrine and educating their subordinates.

Developing soldiers to accept and expect higher levels of professional conduct from themselves and others requires more than explaining what professionalism is. It requires a formal program to assess their current values and what they currently accept as behavioral norms; to explain the Army’s expectation of professional ethic; to challenge their thought process, to dare them to think beyond first-order effects and consider the unseen consequences of their decisions and actions; to provide time and a framework for reflection and support during this reflection process to continue to answer questions and reason through dilemmas. This process is not easy and requires leader time and involvement. It requires leaders who deeply understand the how and why of the Army professional ethic and can anticipate arguments resisting it and have a plan to lead a soldier to the right answer rather than imposing the answer on him or her. It will not be possible to put this in a brief and say, “This is the Army’s policy and you must abide by it or else,” as was the case with most sexual harassment and assault training prior to the implementation of the I. A.M. Strong campaign.

Everyone hates mandatory training; nearly every mandatory training event I have attended on sexual harassment, equal opportunity, or online conduct has always ended with the presenter hoping that one day we won’t need these briefs because everyone will do the right thing. The Army professional ethic is the overarching framework that, if educated and executed effectively, could render all mandatory conduct briefings obsolete. Soldiers who truly understand and accept the Army professional ethic do not require briefs about why sexual harassment has a negative impact on the unit; they don’t need Friday afternoon safety briefs about why driving under the influence is wrong, or why domestic violence cannot be tolerated. In following the principles of the Army’s professional ethic, all other lapses in conduct would disappear, at least to the greatest extent possible, acknowledging that there will always be an insignificant criminal element in every population that will not respond to any amount of training and education.

As it stands, ADRP 1 is not enough, by itself, to welcome the whole Army into the Profession of Arms. Paired with a structured, facilitated, and illustrative vignette-based training program that challenges the shallowness with which we judge our actions and decisions, we could certainly welcome a lot more. The more we welcome the Profession of Arms, the less time we spend talking about what not to do and the more time we spend training for what we must be prepared to do.