The Army Is Speeding Ahead With Self-Driving Medical Transport

The Army is the latest organization to venture into the realm of driverless cars, joining the likes of Tesla, Google,... 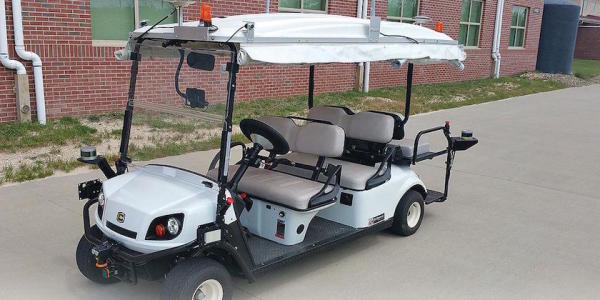 The Army is the latest organization to venture into the realm of driverless cars, joining the likes of Tesla, Google, Audi, Uber, and many others in tech’s most popular sector. Unlike its corporate counterparts, though, Army leadership isn’t investing in this industry to make morning commutes easier or allow people to chow down burgers in the driver’s seat. They’ve got bigger goals in mind.

By 2018, the Army plans to haveautonomous vehicles on the road transporting wounded soldiers to the hospital for rehab. This move is aimed at reducing the likelihood of combat-wounded soldiers missing their doctor’s appointments due to heavy traffic and lack of parking close to on-base hospitals like Fort Bragg’s. These logistical issues cost the Army valuable time and resources, says Edward Straub, program manager for the Army’s Applied Robotics for Installations and Base operations.

“Some of these appointments can cost $5,000. So, if the soldier is not showing up, that’s a huge cost,” Straub said in a recent interview with Automotive News. “We surmised that by providing a reliable, personalized transportation option, we could reduce that number of missed appointments.”

To make this happen, the U.S. Army Tank Automotive Research, Development and Engineering Center has rolled out a three-phase pilot program at Fort Bragg, South Carolina, and several other locations.

The first phase is already underway, with drivers steering the vehicles along their designated routes. Because they are essentially extra-long golf carts operating on military installations, these vehicles operate at low speeds and in controlled areas. Unlike commercial driverless technology likeTesla’s autopilot feature, these Army carts do not necessarily have road signs or markings to give them any cues. Operating them autonomously and safely in this environment is more difficult than in the confines of a city street.

Things will get interesting in phase two, which is tentatively set to begin this fall. Similar to the Google self-driving cars that have been on American roads for months, the cart drives itself, but will have an operator in the front seat in case the vehicle malfunctions in any way.

If everything goes according to plan, the training wheels will come off and these vehicles will operate independently by late 2017 or early 2018. Once this happens, American soldiers will be able to schedule personalized door-to-door transports from their barracks to the hospital with ease.

While these developments aren’t as eye-popping asIsrael’s rollout of self-driving trucks on the Gaza border, they’ll be a huge upgrade for the Army’s on-base medical services and will ensure combat-wounded soldiers get the treatment they need. What’s more, they represent a glimpse into the Army’s future plans to use driverless combat vehicles to transport supplies and soldiers.

These developments may not sound like much compared to many car companies’ upcoming models, but remember, these Army carts are moving wounded soldiers, the most precious of cargo.