Earlier this year, the Army announced plans for a new badge to test soldiers from military occupational specialities who don’t... 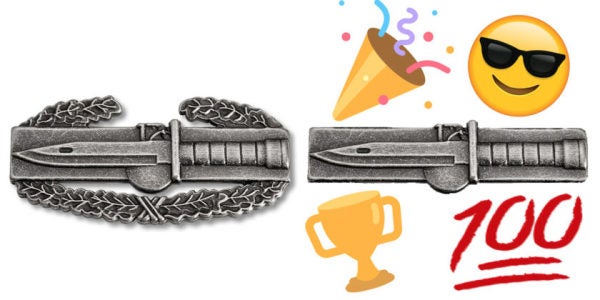 Earlier this year, the Army announced plans for a new badge to test soldiers from military occupational specialities who don’t have a formal way to certify their skills. Under the plan, everyone — not just grunts, medics or non-infantry soldiers who see combat — can get a badge.

The Expert Action Badge is undergoing testing and is still just a concept, but that hasn’t stopped critics from speaking up at a recent town hall hosted by the Army’s Training and Doctrine Command; soldiers have also voiced their concerns in the comment sections of articles all across the internet. Many argued that the proposed badge is a participation trophy for POGs.

“Just name it the PPA. The POG Participation Award,” Kieth Stone, an Army veteran, commented on Facebook in April. “They can bust it out, and show it off to the grandchildren when they tell them the story about walking back from salsa night at the MWR, when they heard a mortar go off, that one fateful night.”

But now the Army is pushing back. The service seems to be making the case that yes, yes, we heard you, we know you don’t like it, but we still want to do it, and has been conducting town halls to convince the troops.

Related: The Army Is Planning A Merit Badge For POGs »

“I know there are some thoughts out there that it’s going to be, ‘Everybody gets it,’” Command Sgt. Maj. Michael Gragg, with the U.S. Army Center for Initial Military Training at Fort Eustis, Virginia, said in a March town hall. “No. It’s not a participation trophy. The infantryman does his infantry tasks every day, but yet only about 25 percent of them get the badge when they go compete for it.”

The Expert Action Badge won’t become a reality for several years, if at all, and would require soldiers to complete 30 tasks and battle drills, in addition to five mental tasks selected by their commander, plus some “surprise extra events,” over the course of three to four weeks.

The idea of doling out badges to those who complete a course and verify their job-specific skills is nothing new in the military. In the Navy and Coast Guard nearly every sailor must meet specialty requirements for their ship or field, as Task & Purpose’s Adam Weinstein pointed out in March.

“It’s not to say one has more value than the other,” Command Sgt. Maj. David Davenport, with TRADOC, said. “It’s about improving individual proficiency, getting that expertise and rediscovering a culture of training your soldiers.”

Understandably, hell, predictably, a lot of trigger-pullers and frontline soldiers don’t like the idea of everyone getting a new piece of bling for their uniform, and now they’ve had a chance to voice their concerns. Whether or not the Army listens and acts on it, that’s another thing entirely.