11 soldiers become the first to receive the Expert Soldier Badge

Have at it, folks. 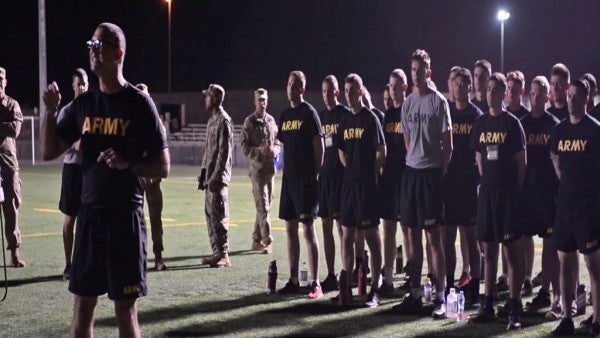 The first 11 soldiers were awarded the Expert Soldier Badge on Tuesday after being the first to take the pilot test two years ago during the award's initial testing.

They received the new badge during the Association of the United States Army's annual conference in Washington, D.C.

The ESB is available to all soldiers who are not combat medics, infantrymen, or Special Forces. To be able to take the test, soldiers have to qualify as “expert” on the M4 carbine or M16 rifle and receive a recommendation from their chain of command, according to the Army. The standards test soldiers' skills over a five-day period, per the Army, and includes events like the Army Combat Fitness Test, day and night land navigation, a 12-mile march, and more.

Commanders will decide when the tests take place — working around deployments and training — similar to the Expert Infantryman and Expert Field Medical badges, said Maj. Gen. Lonnie Hibbard, head of the Center for Initial Military Training.

“[T]here's so much commonality, it was designed that way that you could run them simultaneously and there was only five events that soldiers who are not infantryman will have to do that are different than the EIB,” Hibbard said. “It's based on what the unit can support and the time the unit has. Because if we say you have to do it every three years, based on the training schedule of our reserve and National Guard units … that would interfere with their training plans.”

The first official ESB test will be at Fort Eustis, Virginia, in November this year.

Hibbard added that he expects more units to begin testing for the badge in fiscal 2021. Typically, it takes a total of three weeks for testing — time for resources and evaluators to get there, along with the time window that the actual testing takes, he said.

“I know there are some thoughts out there that it's going to be, 'Everybody gets it,'” former U.S. Army Center for Initial Military Training Command Sgt. Maj. Michael Gragg said in March, 2017. “No. It's not a participation trophy. The infantryman does his infantry tasks every day, but yet only about 25 percent of them get the badge when they go compete for it.”

Correction: A previous version of this article identified Command Sgt. Maj. Michael Gragg as the CSM for the Center for Initial Military Training. He is formerly with CIMT; Command Sgt. Maj. Edward Mitchell is the current CSM for CIMT.