The Army Is Planning A Merit Badge For POGs

So you’re not infantry. You’re not a medic. You don’t have any brushed-metallic way of signaling you’re kind of a... 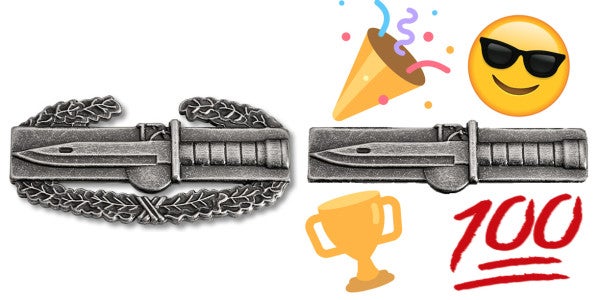 So you’re not infantry. You’re not a medic. You don’t have any brushed-metallic way of signaling you’re kind of a big deal in your particular military occupational specialty. You know what this means? WE HAVE A CRITICAL BADGE GAP. And the Army is here to help fill that sucker for you.

The Army Training and Doctrine Command is moving forward with plans to adopt an Expert Action Badge for hitting certain proficiencies in your MOS field, similar to the expert field badges infantrymen and medics receive. The badge, pictured above, could be in line units by October 2019, Army Times reports.

The appurtenance is designed “for the remainder of MOSs that don’t have a formal way of certifying competencies,” TRADOC’s Command Sgt. Maj. David Davenport told reporters. You know, people with a certain set of skills.

Just to be clear, though it would be available to scads of soldiers, the badge would be somewhat harder to get than little Jimmy’s tee-ball participant trophy. Reports the Times:

Similar to the other badges, soldiers will have to meet requirements for foot marches, the Army Physical Fitness Test, tactical skills and cognitive skills, but the difference will be the hands-on training, he said.

For every soldier who’s not an infantryman or medic, they will be tested on warrior tasks and battle drills in a training event similar to what soldiers must complete for the infantry and medic badges.

This idea is not novel to the other services. To advance in rate, virtually every sailor in the Navy or Coast Guard has to meet warfare specialty qualifications for their ship or field, to the point where a sailor who lacks submarine dolphins, aircrew wings, a SWO pin, or a Fleet Marine Force pin sticks out like a sore thumb in a command photo.

Nevertheless, trigger-pullers love to complain about non-grunts earning chest candy festooned with grenades and bayonets. Army Times’ snap poll of readers suggests that soldiers will bitch to no end about the Expert Action Badge:

Remember: It’s not about the badges or awards! Unless they’re giving them to that dude, over there. In which case: Training timeout, man. We gotta figure this out.