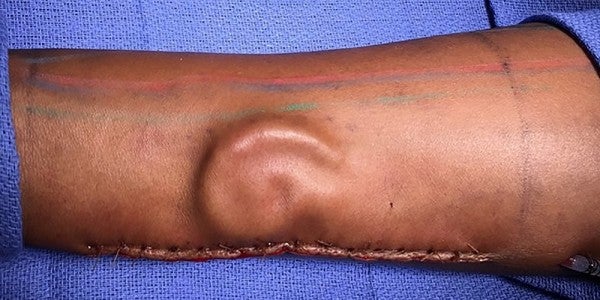 A soldier who lost her left ear in a car accident in 2016 is growing a new one — in her forearm. Sure, it sounds kinda freaky and sci-fi’ish, but ‘ear us out.

“She was 19 and healthy and had her whole life ahead of her,” Lt. Col. Owen Johnson III, the chief of plastic and reconstructive surgery at William Beaumont Medical Center in El Paso, Texas where the surgery was performed said in a May 7 statement. “Why should she have to deal with having an artificial ear for the rest of her life?”

Now thanks to a revolutionary process that was more than a year in the making and a first for the Army, she doesn’t have to. Through two additional surgeries, the ear will be reattached, and Burrage will have full hearing and sense of feeling in the organ, according to the statement.

Related: A Sailor Lost His Hand In A Freak Accident. This Spanish Surgeon Made Him Whole Hours Later »

Here’s how it works: Surgeons harvested cartilage from Burrage’s ribs to carve and shape a new ear, which was then placed under the skin of her forearm — a process called prelaminated forearm free flap.

Placing the cartilage under the skin allows for the formation of new blood vessels. This means that once the rehabilitation process is complete and the ear reattached, the organ will have functional arteries, veins, and nerve endings.

Though Burrage’s ear canal was closed after the accident, she didn’t suffer any loss of hearing, and once the ear is reattached it will be fully functional.