Grab your battle rattle and spin up the birds, the boss wants to do a battlefield circ. What? No, not... 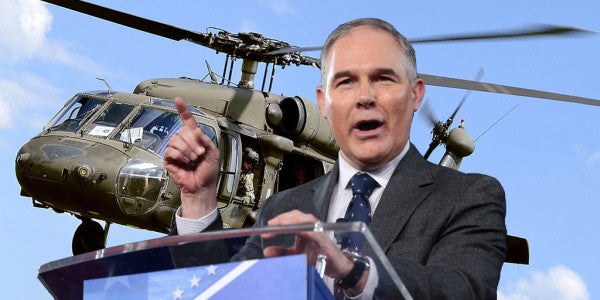 Grab your battle rattle and spin up the birds, the boss wants to do a battlefield circ. What? No, not Mattis. Flag officer? Nah. It's just the EPA guy, he wants a ride around Indiana.

If corruption scandals earned you ribbons, Scott Pruitt — the embattled climate change-denying, energy-loving Environmental Protection Agency director — would be the most decorated American in President Donald Trump's cabinet. Even administration officials now are urging his dismissal after he put taxpayers on the hook for a $43,000 soundproof booth in his office, in violation of federal law; defied the White House to give two EPA cronies extravagant raises, which he appears to have lied about repeatedly; ran up a $60,000 tab for first-class and military air travel for trips home, now under investigation by the agency's inspector general; fired or demoted career staffers who cautioned against his free-spending ways; and rented a DC apartment for about $1,000 a month — wayyyy below market — from a health care lobbyist with interests before the EPA, who ended up having to evict Pruitt when he squatted in the place and failed to pay his rent.

Also, we learned Tuesday, he rode a Black Hawk to visit a mine in Indiana, because lol nothing matters:

On August 2, the Indiana National Guard flew Pruitt, Holcomb, and several aides in a Black Hawk helicopter from Indianapolis to the Liberty coal mine in Boonville, according to schedules and emails published in a 24,000-page trove of EPA documents recently obtained by the Sierra Club. What happened once they got there is unclear; the trip was closed to press. According to an EPA press release after the fact, Pruitt discussed “methods to improve environmental conditions, while also safeguarding critical coal mining jobs.” It did not mention the Black Hawk.

Now, the drive from Indianapolis' airport to the Boonville mine is longish, but not hard: You take I-69 to New Harmony Road, turn left, and you're there. But when everything else about your leadership and spending habits screams Mugatu, you want to ride in fuckin' style. You want a damn Black Hawk.

In fairness to Pruitt, the Indiana Guard seems to do this sort of thing now and then. Their PAO, Maj. Charles Wimp, told the New Republic's Emily Atkin Tuesday that “military-owned helicopters are never used for frivolous purposes”; Atkin then recounted how Vice President Mike Pence was spirited to the Indy 500 last year in a formation of six Black Hawks.

Sure, a Hoosier vice president headed home for his state's biggest sporting event is maybe a little more significant than a secretive mine visit from an EPA administrator with corruption problems — the former sounds like just another day in America, while the latter sounds like a SPECTRE subplot — but anything that keeps Guard pilots' logbooks and training fresh is cool, I guess.

Besides, Pruitt missed out on serving in the military in his youth to set up a “Christian Legal Services” firm — presumably built around the core values of integrity, transparency, and thrift that he's brought to his not-at-all contentious tenure at the EPA. Who knows? Maybe he can find a CH-53 to take him on his final ride out of Washington when he's finally shitcanned. Or rather, if he's ever shitcanned.