How An Expert Action Badge Will Only Hurt Force Readiness

During an U.S. Army town hall meeting on March 30, Sgt. Maj. Michael Gragg, the command sergeant major of the... 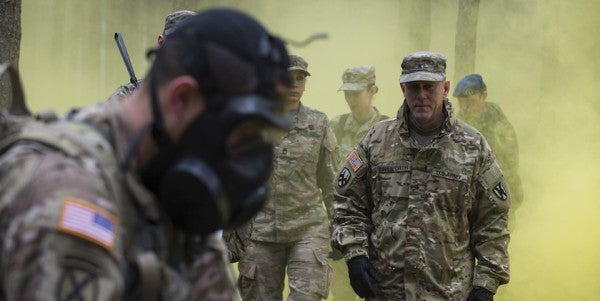 During an U.S. Army town hall meeting on March 30, Sgt. Maj. Michael Gragg, the command sergeant major of the Center for Initial Military Training, presented the audience with an embarrassing statistic: Of the handful of soldiers recently tested on the use of the M40-series protective mask, only less than half knew how to wear it properly. This isn’t rocket science: It’s one of the most fundamental tasks soldiers are expected to perform upon graduating basic training.

That statistic, Gragg argued, was a major factor in the Army’s recent (and controversial) decision to create a new skills badge, called the Expert Action Badge, meant to incentivize commanders across the service to train their soldiers up to standard. The logic is simple: to change behavior, offer a reward.

But the fact that the Army’s top leadership believes this motivation is necessary at all highlights a more urgent problem facing the service which a measly badge will do nothing to remedy: noncommissioned officers throughout the Army are simply failing to do their jobs.

And if anything, the creation of an EAB will only make this problem worse.

The EAB, which probably won’t be implemented force-wide for another few years if it even gets approved, is modeled off the Expert Infantryman and Expert Medical badges (EIB and EFMB, respectively), special skills badges earned by those who demonstrate an exceptional level of proficiency in those fields. But there’s one key difference between the EAB concept and its predecessors: It is not job-specific, which means training and testing for the badge do little to nurture a soldier’s professional development while rewarding them for possessing skills that should be second nature once they leave basic training.

There’s also the problem of implementation. Testing for the EAB will be done at the brigade level. A brigade consists of around 3,000 individuals, and it is difficult to believe that all will be given a chance to test. Under pressure to produce high success rates, squad and team leaders — the first line supervisors who know which of their soldiers will have the best chance of earning the badge — will likely focus their training efforts on the chosen few to the detriment of the rest to of their subordinates. An NCO might volunteer a soldier for gate guard detail so he or she doesn’t suck up time and resources that could be devoted to preparing the rest of the squad or team.

Another obvious problem with brigade-level training: not every unit in the Army has the luxury of pausing its mission for two weeks so soldiers can test. All training units in the Training and Doctrine Command, for example, are completely booked year-round (only breaking for the Christmas holiday), with class schedules planned years in advance. Soldiers assigned to those units will not have the chance to test, so they will have no incentive to train for a skill they should already have down pat. This could prove problematic down the road: If the EAB becomes a promotion discriminator, like the EIB and EFMB are, thousands of soldiers will be at a disadvantage through no fault of their own.

The select few who are given the opportunity to test and manage to earn the badge will not be much better off in the long run, mostly because there is no recertification requirement. When task standards or equipment change, badge-holder’s skills will become instantly dated. For example, the Army is in the process of adopting a new pistol. Just because a soldier proves he is proficient with the old model during EAB testing, doesn’t mean he will be proficient with its replacement — even if the badge on his chest would suggest otherwise.

Enduring skill proficiency requires regular training that is continuously updated as the Army evolves. The EAB concept runs contrary to that fundamental truth. Once a soldier earns the EAB, their leaders will have little incentive to train them, regardless of how long it has been since they earned the badge. Thus, over time, their EAB will gradually become less and less of a reflection of their actual soldiering skills.

On a macro level, emphasizing basic skills over job-specific skills will hurt the overall readiness of the entire force. Knowing how to properly don a pro-mask is important, but if if you are say, a truck driver, it’s not nearly as important as knowing how to properly react to a complex ambush. The goal should be to focus leaders and soldiers on both basic and professional tasks, which the the EAB won’t do.

I’ll suggest an alternative: create a skills badge for all of the various job fields, like the Expert Transportation Badge, Expert Cavalry Badge, Expert Artillery Badge, etc. As with the EIB and EFMB, these badges would recognize excellence in each unique job, while also ensuring that those who earn them are fluent in the fundamentals. Testing would include basic tasks, but also job-related tasks, which will improve the Army’s overall performance.

But, really, badges aren’t necessary at all. I’d argue that the best solution would be for the Army to bring back the annual skills testing that was phased out in the early 2000s. Before the wars in Iraq and Afghanistan heated up, the Army had, for years, required all soldiers to complete annual Common Task Training. I’m old enough to remember the benefits of that training. It worked.

Now, the effects of the Army’s decision to abandon it are being felt, and, instead of bringing that training back, we’ve decided to pursue an inferior option. We’re smarter than that. Requiring all soldiers, not just a select few, to perform the basic tasks is the only way to ensure all soldiers are capable performers. Let’s dust off the old training schedules and hold everyone to the same performance standard.

The EAB is not going to improve skills across the force, because it does nothing to address the larger issue at hand: NCOs throughout the Army are not performing one of the most crucial duties they’re obligated to perform on a regular basis, which is train soldiers. Just like adopting the black beret did not improve morale, a shiny badge will not fix the problem. The EAB is good in theory, but in practice it will only perpetuate the very same culture of complacency that got us here in the first place.