Army drill sergeants were phased out of Advanced Individual Training a decade ago, but now, after years of deliberation, the... 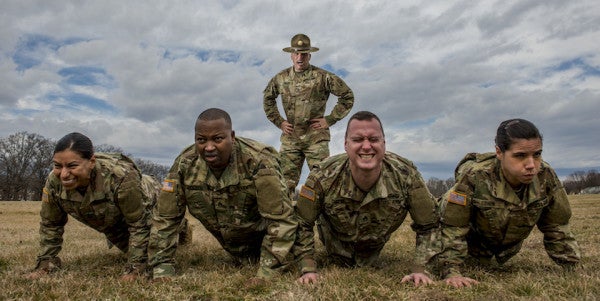 Army drill sergeants were phased out of Advanced Individual Training a decade ago, but now, after years of deliberation, the official call has been made: They will be phased back in as soon as October 2019, according to a U.S. Army Training and Doctrine Command news blog post.

Command Sgt. Maj. Michael Gragg, the command sergeant major of the Army’s Center for Initial Military Training, has been pushing for the return of drill sergeants to AIT for quite some time, and announced his intent to put the process in motion during an Army town hall meeting back in March.

Maj. Tom Campbell, the media relations chief for TRADOC, reached out to Task & Purpose on May 18 to clarify that the Army has not “not committed to a final timeline, or a final decision at this point, as we continue to work through the many details involved with such a change.”

AIT — job-specific training programs for recruits who have completed boot camp — replaced its drill sergeants with platoon sergeants in 2007. The idea was to better prepare soldiers for post-training life in the regular Army. The length of AIT varies, depending on a soldier’s military occupational specialty, or MOS. In many cases, training runs for several months. During AIT’s drill-sergeant era, that meant soldiers could spend nearly a year in a basic training-type environment before their Army careers really began.

“It was a matter of trying to get them to associate authority with a figure other than the hat,” Gragg once said of the Army’s decision to phase out AIT drill sergeants. “But what we didn’t realize and didn’t take into account is the drill sergeant in the AIT environment is still working on that soldier.”

Gragg and other Army officials have long argued that removing drill sergeants from AIT resulted in a decrease in discipline among new recruits, whom they seem to regard as being hardwired for shenanigans.

“Our AIT platoon sergeants are doing an outstanding job with the tools and skills they have,” Gragg said in April 2016. “The problem that we do have is that right now the generation we have coming in is not as disciplined as we would like them to be, so we have to provide them with discipline over a longer period of time.”

Enforcing discipline has always been the leading argument for returning drill sergeants to AIT, but it doesn’t appear to be the primary reason why the Army approved the decision. The real justification seems to stem from a struggle to entice non-commissioned officers into the job of training and mentoring new recruits after basic training.

“We have a challenge in meeting and maintaining AIT platoon sergeants in the force with the numbers that we need,” Gragg said during the March town hall. “We are are habitually not at that 100 percent mark that we’d like to be… Often it’s because individuals have no desire to come out there, and it’s because there is nothing in it for them.”

Drill sergeants get a badge, a cool hat, and special pay, while AIT platoon sergeants receive none of the above; although, as TRADOC notes, the majority of platoon sergeants — between 50% and 70% — get selected for promotion after taking the assignment.

But advancement is still a challenge for many of the platoon sergeants, according to Gragg.

“In comparison to their drill sergeant brethren, they may not get promoted in the same fiscal year because of the simple fact that when that drill sergeant takes their DA photo, they have something in their photo that says they are doing that special duty,” Gragg said. “My AIT platoon sergeant, they take their photo, they don’t have anything on there.”

If you’re planning on joining the Army and curious about what life will be like in AIT under an all-drill sergeant regime, you can check out this essay  for a little sneak peek at what’s in store.

UPDATE:This article was updated to reflect the statement from Maj. Tom Campbell, the media relations chief for TRADOC, who stated that the 2019 timeframe was not finalized and had been misstated by the TRADOC news blog. (Updated 5/18/2017; 1:32 pm EST)