Would You Kill A Goat To Save a Soldier? Soon, The Military Might Not

A bipartisan group in Congress is trying to end the U.S. military’s practice of using live animals to train medics, … Continued 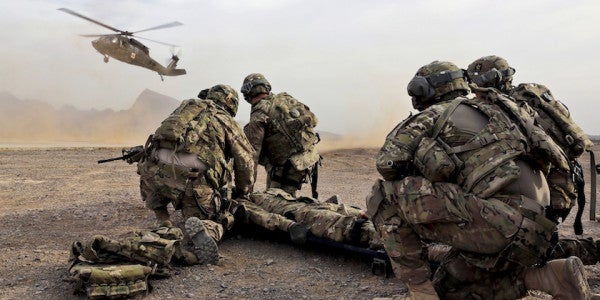 A bipartisan group in Congress is trying to end the U.S. military’s practice of using live animals to train medics, the Washington Examiner reports. If the bill introduced last week by Rep. Hank Johnson (D-Ga.) and Rep. Tom Marino (R-Pa.) passes, one of the military’s most effective methods for preparing frontline medical personnel to treat battlefield trauma, which costs the lives of an estimated 8,500 pigs and goats each year, would be phased out by Oct. 1, 2020.

In an interview with the Washington Examiner, Johnson explained that the bill would require the military to replace “live tissue training” with “human-based methods” — specifically, the use of high-tech simulators, which, he noted, are more humane and efficient. “It may cost more for a simulator than for a live animal in terms of initial outlay,” he said, “but you can only use that animal once. You can use the simulator repeatedly. So over the course of time, it’s better.”

Live-tissue training has been targeted by animal rights groups for years, and this is certainly not the first time lawmakers have introduced legislation to end it. When I went through the Army’s “goat lab” course at Ft. Campbell, Kentucky in 2010, the instructors warned us, with characteristic hyperbole, that People for the Ethical Treatment of Animals, or PETA, was waging a covert war to end the program. In fact, before we could begin the course, we — the trainees — had to sign a contract stating that we would not discuss our experiences in the goat lab beyond the chainlink fence that encircled the training ground.

But details of the training eventually leaked anyway, and surreptitiously shot footage of military instructors mutilating anesthetized animals made its way into the hands of PETA, who posted it on the internet. Is the footage disturbing? Of course it is. But what it fails to capture is the invaluable skills and knowledge that medics acquire through the training. Just about every medic who attended the goat lab with me in 2010 was preparing to deploy to Afghanistan. Many of us on the battlefield encountered the same injuries we had treated in the lab. I have only treated a full leg amputation twice. The first time was on a goat. The second time was on my friend, who got his leg blown off in a minefield. He survived.

As someone who benefited from live tissue training, I insist on its superiority over human-based simulators, which the Army had already begun to incorporate when I was active duty. A plastic mannequin — even if it moans, blinks, and bleeds like a person — cannot simulate the feeling of real tissue, blood, and bone. Nor can it duplicate the stress of saving an actual life.

Meanwhile, the Department of Defense says it’s not yet prepared to do away with live tissue training. “[The military] is actively working to refine, reduce, and, when appropriate, replace the use of live animals in medical education and training,” Lt. Col. Roger Cabiness, a Pentagon spokesman, told the Washington Examiner. “Therefore, we would ask Congress to work with us until there are validated alternatives, and that experience and confidence gained by current training methods in teaching life-saving procedures improve before they consider passing the legislation.”

Animal-rights activists, of course, don't see it that way. And they believe the effort to end live tissue training may stand a real fighting chance.

“I believe it’s been gaining momentum over the last few years. We have released video tapes showing what goes on in these trainings the simulators now are so sophisticated,” Kathy Guillermo, a PETA senior vice president, told the Washington Examiner.

“It’s getting very difficult for the military to excuse stabbing and shooting pigs and goats,” she added.