Our thoughts and prayers are with this cadet's family. 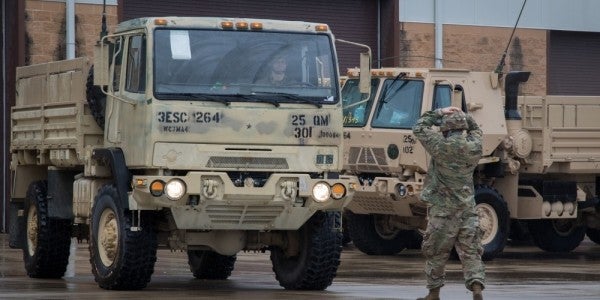 A West Point cadet was killed in a tactical vehicle rollover Thursday that injured 20 other cadets and two soldiers, the U.S. Military Academy has announced.

The injured cadets and soldiers are being treated for non-life threatening injuries, such as facial cuts and one broken arm, Col. Brett Venable, commander of Kelly Army Community Hospital, told reporters on Thursday.

Driven by two soldiers, the Light Tactical Vehicle was taking the rising seniors to a “standard training exercise” at a land navigation course when it rolled over, said West Point Superintendent Lt. Gen. Darryl Williams.

So sorry to hear about the terrible accident involving our GREAT West Point Cadets. We mourn the loss of life and pray for the injured. God Bless them ALL!

“Today was a tragic day for the West Point community and our United States Army,” Williams said at a brief news conference on Thursday. “Our thoughts and prayers are with families of the deceased and our injured.”

Williams declined to say where the cadet who was killed was sitting in the vehicle or what injuries the cadet sustained. Army officials are in the process of notifying the cadet's family, he said.

The superintendent also said he was not concerned that too many cadets had been loaded into the vehicle at the time of the accident.

“It is not common for these vehicles to turn over,” Williams said. “It's very rough terrain. You can see the hills we have here. We want to make sure that our soldiers and our cadets train in a realistic training environment, so this part of our realistic training.”

President Donald Trump tweeted on Thursday that he was saddened by the accident involving “GREAT West Point Cadets.”

“We mourn the loss of life and pray for the injured,” Trump tweeted. “God Bless them ALL!”

New York Gov. Andrew Cuomo also issued a statement on Thursday saying he was heartbroken over the accident.

“These courageous cadets and soldiers represent the best of New York State and our country, and we owe them a debt of gratitude for their bravery in choosing to serve our country and protect our freedoms,” Cuomo said. “This incident is made all the more heart wrenching as we commemorate the 75th anniversary of D-Day today, a day where we remember those who gave their lives for our country.”