Research at an Army lab that tests infectious diseases like the Ebola virus has been temporarily shut down after a government agency found safety concerns within the lab, so that's exciting to think about 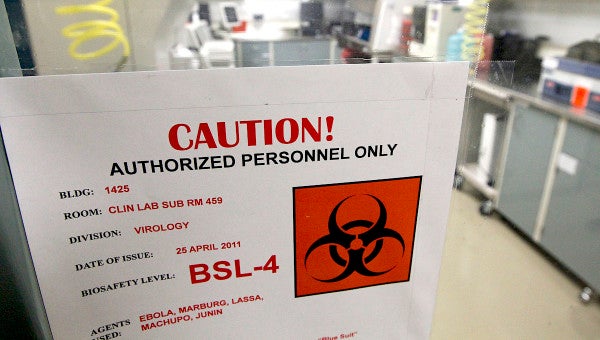 Research at an Army lab that tests infectious diseases like the Ebola virus has been temporarily shut down after a federal agency found safety concerns within the facility, so that's exciting to think about.

Research conducted by the U.S. Army Medical Research Institute of Infectious Diseases (USAMRIID) was halted after the Centers for Disease Control and Prevention (CDC) found that the lab “failed to meet biosafety standards,” as first reported by The Frederick News-Post.

The research that has been suspended involves “select agents,” the New York Times reports, including the plague, Ebola, smallpox, and other pathogens the government has found to have “the potential to pose a severe threat to public, animal or plant health or to animal or plant products.”

The CDC inspected the military research institute in June and found “several areas of concern in standard operating procedures, which are in place to protect workers in biosafety level 3 and 4 laboratories,” USAMRIID spokeswoman Caree Vander Linden told the News-Post.

According to the CDC, things studied in a biosafety level 3 lab “can be either indigenous or exotic, and they can cause serious or potentially lethal disease through respiratory transmission.”

Biosafety level 4, on the other hand, is the “highest level of biological safety,” per the CDC, handling agents which pose the highest risk of infection that is “frequently fatal.” At USAMRIID, researchers were working on the Ebola virus in the biosafety level 4 lab.

The CDC found that at the lab lacked periodic recertification training for personnel who worked in the biocontainment laboratories. In addition, there was a “failure to follow local procedures” and a wastewater decontamination system deemed below standards, the News-Post reported.

When the lab received its cease and desist letter in July, researchers were working on agents that cause a rare infectious disease, tularemia, as well as Venezuelan equine encephalitis, per the News-Post.

Oh, and also the plague.

Fortunately, Vander Linden told the Times that while the CDC found leaks, they were inside the lab, meaning that no pathogens has escaped the lab into the outside world.

Employees of the lab are still working on some other projects, according to the Times, just not on those “select agents.”

“USAMRIID will return to fully operational status upon meeting benchmark requirements for biosafety,” Vander Linden told the News-Post. “We will resume operations when the Army and the CDC are satisfied that USAMRIID can safely and consistently meet all standards.”

USAMRIID has not yet responded to additional inquiries from Task & Purpose, but as of now it seems unlikely that society as we know it will be brought to its knees by a pathogen somehow freed from its laboratory prison.