Two gang members were convicted on Thursday of murdering a 19-year-old U.S. Marine in Los Angeles in Sep. 2016. 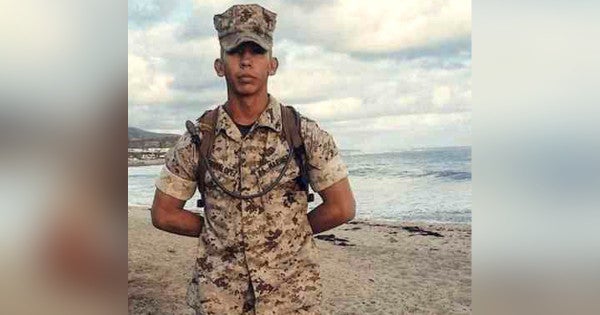 Two gang members were convicted on Thursday of murdering a 19-year-old U.S. Marine in Los Angeles in Sep. 2016.

Oscar Agular, 28, and Esau Rios, 31, were both found guilty of first-degree murder in the shooting death of Lance Cpl. Carlos Segovia Lopez, who was visiting his girlfriend on weekend liberty when he was killed. Aguilar was also convicted of possession of a firearm by a felon, the Los Angeles County District Attorney's Office said.

On Sept. 16, 2016, Lance Cpl. Carlos Segovia Lopez of Los Angeles was on leave from Marine Corps Base Camp Pendleton when he saw Aguilar and Rios possibly tampering with vehicles and confronted them. At Rios' direction, Aguilar approached Segovia Lopez, who was sitting in his car at 31st Street and St. Andrews Place, and shot him once in the head, according to court testimony.

Aguilar and Rios were known gang members, according to testimony.

Lopez died in the hospital three days later. He had only been in the Marine Corps for about six months, and was a student in the Basic Reconnaissance Course at School of Infantry-West, Camp Pendleton, California.

“In a very short time, Lance Cpl. Segovia Lopez deeply impacted those who came to know him,” said Sgt. Maj. Benny Benton, the sergeant major of the School of Infantry-West. “His unselfish and honorable legacy will live on in our Corps.”

Born in El Salvador on March 7, 1997, Lopez's mother brought him to Los Angeles when he was five, his obituary said. As a teenager, he volunteered to help homeless people and animals with a group called Cloud 9, and later enlisted in the Marine Corps and was named honor graduate of his boot camp platoon.

“I never met a man more humble and more determined than you,” one Marine said of Lopez in a remembrance video.

The pair of gang members are scheduled to be sentenced on July 8. Aguilar faces a maximum prison sentence of 107 years to life; Rios faces 50 years to life. A third defendant, Ricky Valente, pleaded no contest to accessory after the fact in June 2018, and is expected to serve three years of probation, according to the DA.