'He was talking to his Marines in a real way' 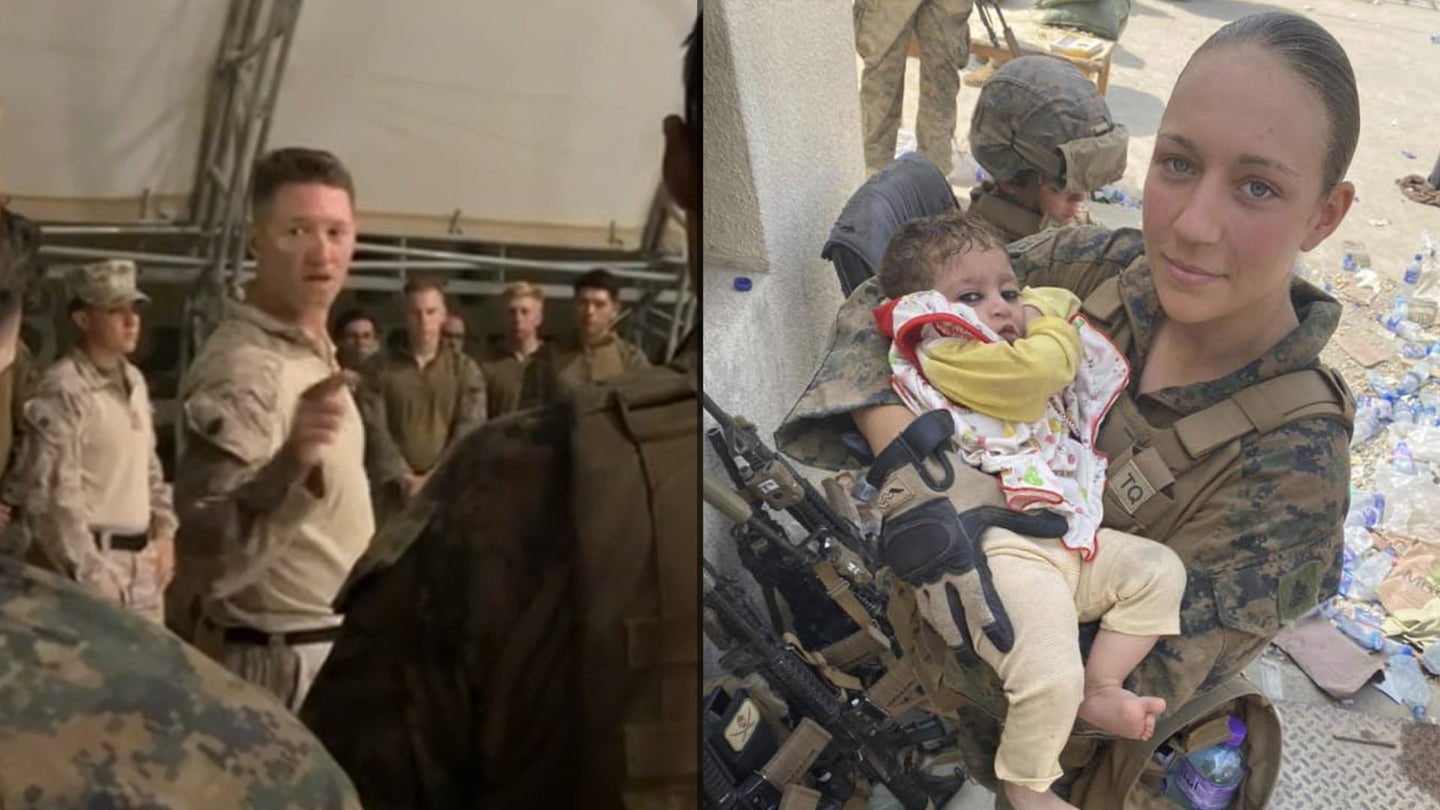 Surrounded by his fellow Marines, Gunnery Sgt. Christopher Duncan McClain gave a stirring speech in remembrance of Sgt. Nicole Gee, one of the 13 American service members killed in the Aug. 26 attack at Hamid Karzai International Airport in Kabul.

McClain, who later acknowledged on his Facebook page that he gave the eulogy, assured the Marines that Gee’s death was not their fault and that she died doing what she loved. “God needed an angel for his war, and he took the best goddamn one,” McClain said.

The term “guardian angel” is also used to refer to those service members who are providing security during an operation, often in the form of overwatch.

At the time of her death, Gee was assigned to Combat Logistics Battalion 24, which had deployed to Afghanistan as part of the 24th Marine Expeditionary Unit. It’s unclear if McClain was Gee’s direct superior. In response to questions from Task & Purpose, officials with the II Marine Expeditionary Force said in a statement that McClain is also assigned to the battalion but “the command relationship between the two of them cannot be confirmed at this time.”

Part of McClain’s speech was captured on video that was posted on social media by a Marine who served with Gee.

When Marine veteran Peter Lucier tweeted the video on Tuesday, some people objected to McClain’s choice of words about God taking Gee to become an angel.

Lucier acknowledged that McClain’s reference to God may be problematic, but he said he also believes McClain was speaking from his heart to grieving Marines who were all in pain.

“He was talking to his Marines in a real way,” said Lucier, who served in the Marine Corps from 2008 until 2013 and deployed to Afghanistan. “I was a lance corporal. Watching that video, I think that the gunny has the hearts of Marines there. I don’t know what it’s like to feel excluded based on religious beliefs, so if a marginalized person felt left out, or that the remarks were inappropriate, that’s valid.”

“Marines framing their battles in the morally complex arena of war, as [a] struggle of good vs evil, that too is problematic,” he continued. “But it would be hard to find a more morally righteous deployment than doing an evacuation op. For whatever wrongs had happened before, whatever failures of the US, those Marines went to HKIA to save lives.”

McClain could not be reached for comment on Wednesday, though his Facebook page included many posts from people thanking him for his eulogy of Gee.

While deployed to Afghanistan, Gee and the other service members at Hamid Karzai International Airport were helping Americans and Afghans get on a flight to freedom. For many of the thousands of people who struggled to get past Taliban checkpoints in Kabul and then through the airport’s gates, being left behind likely meant death for them and their families.

“In Afghanistan Sgt. Gee would work multiple shifts a day just to be around the children and families being evacuated,” Sgt. Landon Workman, of Combat Logistics Regiment 27, 2nd Marine Logistics Group, later recalled. “She was the most loving and caring individual I’ve ever met. She was the ‘mom’ of any group she was a part of and had a knack for brightening anyone’s day.”

The suicide bomb attack on Aug. 26 took the lives of 11 Marines, including Gee, along with one Navy corpsman, one Army special operations soldier, and at least 170 Afghans. But the 18-day evacuation succeeded in getting more than 124,000 people to safety.

Cpl. Tracy Ramlochan, with the 8th Communications Battalion, II Marine Information Group, remembered Gee as someone who always smiled and wanted to help people. “You went out of your way to make sure families were okay on a personal level and you cared like it was your own family,” Ramlochan said.

McClain’s speech was not the first time that Gee has been called an angel. Shortly before her death, she posted a picture on Instagram of her cradling a young Afghan child along with the caption, “I love my job.”

“Who else but a guardian angel amidst the chaos and violence of those last days in Kabul could look beyond that into the eyes of a little infant she was protecting and proclaim, ‘I love my job,’” U.S. Rep. Tom McClintock (R-Calif.) said during a memorial service for Gee earlier this month.

Gee was nearing the end of her shift when someone gave her the baby, her aunt Cheryl Juels told the Sacramento Bee. The Marine sergeant had not been sleeping much because she and the other service members were constantly surrounded by thousands of desperate people who constantly screamed for help.

“To calm the baby down amid the noise and the heat, Gee blew softly on the little girl’s face and smiled at her,” the newspaper reported.