He was released Wednesday after posting $50,000 bond. 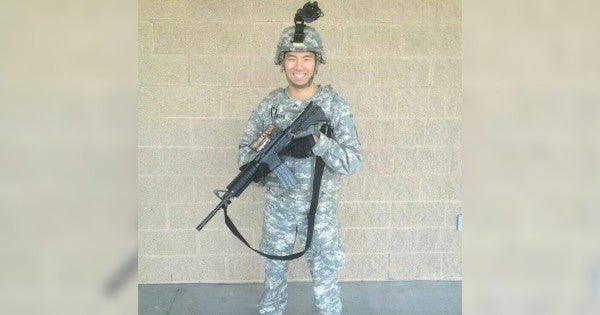 A 31-year-old former Army sergeant was arrested early Tuesday after allegedly dressing up as a National Guardsman during protests in Los Angeles before actual guardsmen noticed and said, hey buddy, your name ain’t here on the roster.

Gregory Wong, of Gardena, California, was seen in military garb carrying an assault rifle when he was approached by Los Angeles Police Department officers and subsequently arrested at 1:30 a.m., an LAPD official said, after officers were alerted by members of the National Guard.

“He was charged with transportation of an assault weapon,” said Norma Eisenman, a police spokeswoman. “It does not appear that he was a threat to the public.”

Wong, who police say was also carrying a pistol, told officers that he was heading downtown to provide security at a friend’s establishment. Wong arrived at the protest in a civilian sedan, said Eisenman, who declined to provide further information.

Wong did not respond to requests for comment from Task & Purpose. He was released Wednesday after posting $50,000 bond, jail records show.

Though some news outlets reported that Wong was a former member of the National Guard, Army service records provided to Task & Purpose show Wong served on active duty in the Army from Jan. 2008 to Jan. 2014, achieving the rank of sergeant. After his discharge, he served in the Army Reserve until July 2019. He is currently in the inactive ready reserve.

Wong served as an information technology specialist (25B) and never deployed, according to Army records. His awards and decorations include two Army commendation medals, five Army achievement medals, a good conduct medal, overseas service ribbon, and the parachutist badge.

He served in the 82nd Airborne Division as well as the 78th and 112th Signal Battalions, according to his website and Army records.

Wong, a popular airsofter and military reenactor who goes by the handle “spartan117gw” on YouTube and Instagram, has amassed more than 140,000 fans by sharing videos related to airsoft training and military gear.

Wong also seems to be involved in the film industry. On his Twitter account, which has since been taken down, Wong posted photos of himself alongside actor Jon Bernthal during filming for the video game Tom Clancy’s Ghost Recon Breakpoint. On his website, Wong said he was involved with that and other commercial projects.

Thousands of National Guard troops have been deployed throughout the state of California in response to widespread protests over the death of George Floyd, an unarmed black man, while in the custody of police in Minneapolis. Peaceful marches and demonstrations, some which have resulted in violence and looting, have been held in California and across the United States for more than a week.

Correction: This article was updated on Dec. 28 to correct a typographical error for a military unit. It is the 112th, not the 122th, Signal Battalion.