The Army reservist who plotted with two military veterans on inciting violence amid peaceful protests over the death of George Floyd in Nevada had at least one prior run-in with law enforcement, according to records obtained by Task & Purpose 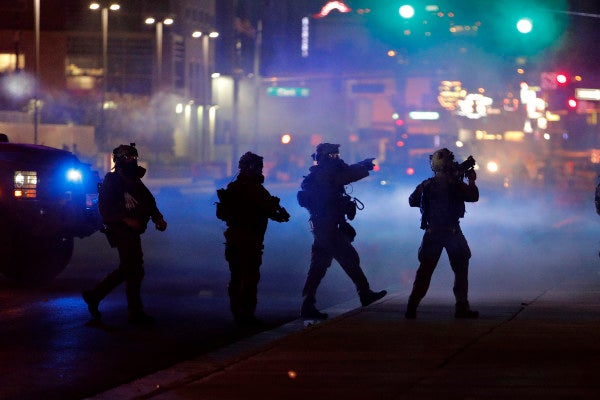 The Army reservist who plotted with two military veterans on inciting violence amid peaceful protests in Las Vegas, Nevada over the death of George Floyd had at least one prior run-in with law enforcement, according to records obtained by Task & Purpose.

Pfc. Andrew Lynam, 23, was charged Tuesday alongside Air Force veteran William Loomis, 40, and Navy veteran Stephen “Kiwi” Parshall, 35, with conspiracy to damage and destroy by fire and explosive, and possession of unregistered firearms.

Lynam joined the Army Reserve in August 2016 as a health care specialist (68W), rising to the rank of private first class (E-3) as of August 2017. He is currently assigned to the 491st MC CO (Area Support), 176th Medical Brigade, 807th MDSC, according to a document outlining Lynam's service record prepared by Army officials, which was inadvertently sent to a Task & Purpose editor on Thursday.

According to the document, prior to joining the Reserve, Lynam was involved in an August 2015 felony assault during which he “had two knives [and] was involved in an altercation” while intoxicated. The incident, which Lynam self-admitted, was highlighted by officials as “close hold” information that should not be released to reporters.

The prior assault was no obstacle to Lynam joining the Reserve. His records show that he passed both a T3 and SAC security clearance investigation by the Office of Personnel Management, although no determination was made regarding his clearance.

According to the Las Vegas Sun, Lynam met Parshall in a popular Facebook page for the “Boogaloo” movement, which advocates for the destruction of civilization through violence.

Lynam and Parshall eventually participated together in an April rally calling for the reopening of the Nevada economy during the height of the novel coronavirus (COVID-19) pandemic in the state.

Lynam insisted the 'Boogaloo' group “was not for joking around and that it was for people who wanted to violently overthrow the United States government,” according to federal authorities. From the Las Vega Sun:

They wanted to achieve destruction through chaos and confusion, and spoke about how perhaps the May 16 Reopen Nevada rally in downtown would be a good opportunity, the complaint said. But Lyman couldn’t figure out how to sync some fireworks with a timer and canceled the plan, according to the complaint.

Parshall had bought smoke bombs he wanted to use, but since they were the only ones dressed in combat garb, they would stand out to police. He walked by a government building and left a bag behind that police found, which contained spent shotgun shells and empty gun magazines.

On May 23, Loomis and Parshall went to Lake Mead to scout a building they would try to destroy. Ultimately, they didn’t take action.

Eventually, the trio settled on bombing a NV Energy building amid the protests against police brutality that followed the death of George Floyd in Minneapolis in order to “[create] civil unrest and riots throughout Las Vegas,” according to federal authorities.

“Violent instigators have hijacked peaceful protests and demonstrations across the country, including Nevada, exploiting the real and legitimate outrage over Mr. Floyd’s death for their own radical agendas,” U.S. Attorney for the district of Nevada Nicholas Trutanich said.  “Law enforcement is focused on keeping violence and destruction from interfering with free public expression and threatening lives.”

According to the Las Vegas Sun, the three men are being held on $1 million bond each in Clark Country jail following their arrest at the hands of an FBI SWAT team on May 30.