The deadliest shooting in modern U.S. history took place on Oct. 1 in Las Vegas in part thanks to a legal device... 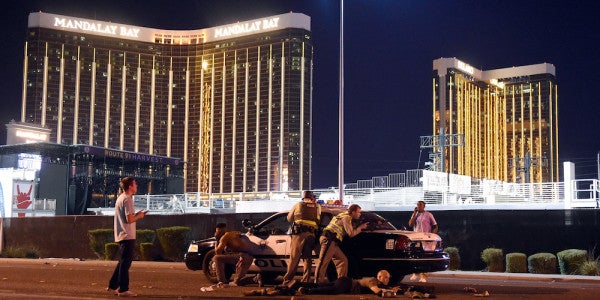 The deadliest shooting in modern U.S. history took place on Oct. 1 in Las Vegas in part thanks to a legal device that allows any gun owner to circumvent gun laws.

Stephen Craig Paddock, the 64-year-old retiree who opened fire on a country music festival from the 32nd-floor window of his hotel room, possessed 23 firearms and thousands of rounds of ammunition that he had procured legally.

In Nevada, where Paddock lived, anyone who is at least 18 years old can own a firearm.

Nevada does not license gun owners, require guns to be registered, limit the number of guns a person can purchase in one sale, or impose a waiting period on gun purchases.

Nevada allows the sale of high-capacity magazines, high-caliber weapons and ammunition, and military-style weapons, though they are prohibited in other states.

But one of Nevada's few restrictions is on the sale or manufacture of automatic weapons, and the Associated Press reports that Paddock used a legal device to effectively circumvent that.

nstead of a solid stock seen on the gun pictured above, a bump stock bounces back against the shooter's finger, automating the trigger-pulling processPhoto via The Slow Mo Guys via Youtube

The device, known as a “bump stock,” replaces the shoulder rest of a rifle with a device that bounces the weapon back into the shooter's trigger finger. Effectively, the semiautomatic weapon still fires one bullet for every pull of the trigger, but the bump stock automates the trigger-pull process, allowing shooters to fire at a rate of 400 to 800 rounds a minute.

Gun users can achieve a similar, though less controlled effect by sticking their finger through their belt loop or simply by holding a stick between the trigger and the trigger guard.

Paddock rattled off hundreds of shots over few minutes. The bullets peppered a crowd of 22,000 people, leaving at least 59 dead. More than 500 others were injured either by gunfire or by trying to escape it.