How did one man commit the largest mass shooting in modern American history, killing 58 people hundreds of yards away... 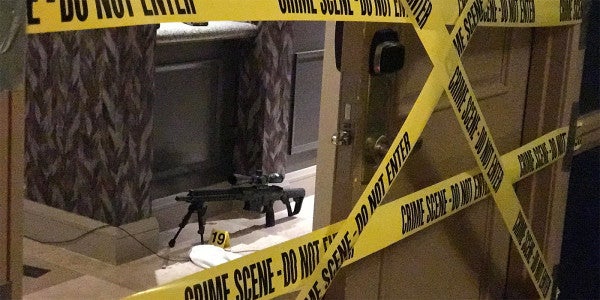 How did one man commit the largest mass shooting in modern American history, killing 58 people hundreds of yards away and injuring more than half a thousand in 11 minutes? All it took was the $50,000 or more that he spent to amass more small-arms firepower than a line infantry squad.

Newly leaked graphic photos of the hotel suites Stephen Paddock used to commit his crime in Las Vegas Oct. 1 give us some insights into his arsenal of weapons, and how they converted a paunchy 64-year-old retired office worker and gambler into one of the nation’s worst mass murderers.

According to authorities, Paddock had 23 firearms ranging from .223 to .308 caliber in the hotel suite he used as an attack position; 17 were rifles, a law enforcement source told L.A. Times. Twelve of those, authorities say, carried bump stocks to simulate full-automatic fire. By comparison, an Army infantry squad typically carries around eight M16 or M4 rifles and two M249 light machine guns. (Two riflemen typically also carry the M203 grenade launcher on their rifles.)

In the images, obtained by a reporter at Fox News TV station Boston 25, hundreds of spent bullet casings are visible on the floor around the dead killer’s feet. Dozens of ammunition magazines are strewn across the space; some appear to be 100-round magazines — not bulky drum-style magazines notorious for jamming, but extended banana-style mags, billed by one manufacturer as “only 1.66″ thick, less than two 30-round magazines clipped together.” The photos also indicate that Paddock mounted optics and bipods on many of his AR-style rifles, which would have enabled him to more easily target concertgoers on the Las Vegas strip, 300 feet down and several hundred yards away from his hotel suite.

While bystanders had suggested that Paddock was firing fully automatic machine guns, it appears his weapons were all mass-produced semi-automatics — but the legal bumpfire stocks on some rifles gave him the ability to fire rapidly, up to nine rounds per second.

Firing any weapon near its cyclic rate for a prolonged period puts extreme stress on it. The rising heat can warp or rupture gun barrels. This is one reason professional soldiers are generally trained to fire automatic weapons in brief bursts, rather than sustained fire of the sort Paddock attempted in Las Vegas. One way to keep your weapons from failing under sustained rapid-fire is to have more weapons, and switch between them frequently.

It’s unclear how many of the weapons Paddock actually used to carry out the shooting, but the sheer volume may be explained by a desire to sustain a high rate of fire for as long as possible.

Those weapons, according to the L.A. Times, included:

Law enforcement officials say Paddock purchased 33 firearms in the year before the attack. While gun-sellers are required to send notice of multiple handgun purchases to the Bureau of Alcohol, Tobacco, Firearms and Explosives, there’s no such requirement for long guns. Several Nevada gun shops and one in Utah told reporters they had sold guns to Paddock recently, but all said he raised no red flags.

Paddock, who specifically requested the suite at the Mandalay Bay Resort and Casino, reportedly lugged at least 10 suitcases up to his room in the days before the deadly attack. He also set up video cameras in the room door’s peephole and on a food cart in the outside hall to monitor police activity, authorities said.

The search for a deeper motive in Paddock’s murders has yet to pan out. “I can’t get into the mind of a psychopath,” Las Vegas Sheriff Joe Lombardo told reporters Oct. 2.

But the sheer cost of Paddock’s weaponry, the physical task of setting up, and the planning and execution of the attack suggest he was deeply committed to a violent coup de grace.

“There were hundreds and hundreds of volleys … it was hundreds of shots into a sea of people,” one eyewitness to the carnage said. “Those poor people, they were just trapped and this guy wanted to do as much damage as possible.”

Update, 4 PM EDT: This post has been updated to add context on the composition of an Army infantry squad.