Police Still Have Not Discovered A Motive For Las Vegas Shooting

A day after 59 people were killed and 527 others were wounded at a shooting at a Las Vegas concert,... 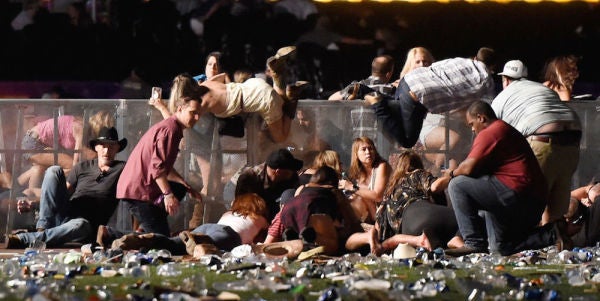 A day after 59 people were killed and 527 others were wounded at a shooting at a Las Vegas concert, police said they had recovered an arsenal of at least 42 weapons stashed in the gunman’s car, house and hotel room, but had still had not discovered a motive for one of the worst mass shootings in U.S. history.

The Islamic State extremist group on Monday claimed responsibility for the attack. Providing no evidence, a news agency affiliated with the group quoted an unidentified security source who said Paddock was a “soldier” who had converted to Islam.

Almost immediately, the special agent in charge of the Federal Bureau of Investigation’s field office in Las Vegas, Aaron Rouse, said federal authorities had found no such evidence.

Police officers stand by as medical personnel tend to a person on Tropicana Ave. near Las Vegas Boulevard after a mass shooting at a country music festival nearby on October 2, 2017 in Las Vegas, Nevada.Photo by Ethan Miller/Getty Images

“We have determined, to this point, no connection to an international terrorist group,” Rouse said.

In the 32nd-floor hotel room at Mandalay Bay Resort and Casino where police said gunman Stephen Paddock unleashed a hail of bullets at concertgoers below, officers found 23 firearms, and in his vehicle and home northeast of Las Vegas, more guns, explosives and several thousand rounds of ammunition.

Paddock, 64, had checked into the hotel Thursday, and used more than 10 suitcases to sneak the firearms to his suite, Clark County Sheriff Joe Lombardo said.

The weapons recovered ranged from .308- to .223-caliber rifles, Lombardo said. Many were military-style rifles equipped with scopes, allowing Paddock to fire on victims more than 500 yards away.

At least one rifle had been modified with a legal “bump stock” style device that allows the shooter to rapidly fire off rounds without actually converting to a fully automatic weapon, a law enforcement source said.

Such devices modify the gun’s stock so that the recoil helps increase the speed with which the shooter can pull the trigger.

Other weapons may have been converted to fully automatic fire, and were still being examined, the source said.

In Paddock’s car, police found ammonium nitrate, another compound that can be used to make explosives.

Investigators are now working to track down all of Paddock’s gun transactions, including some at Nevada gun shows. Records show that he had owned at least 30 guns at one time or another. “He had good-quality, high-powered rifles,” the source said.

The death toll could rise, Clark County coroner Josh Fudenberg said. The figure does not include Paddock.

Doctors have treated victims for gunshot and shrapnel wounds, but also trample injuries and scrapes from jumping fences trying to escape the gunfire, said Greg Cassell, the chief of the Clark County Fire Department.

“I have worked here for 30 years and I have never seen that many ambulances as I saw,” Cassell said. “Dozens and dozens.”