Presidential hopeful and Republican senator from Texas Ted Cruz has released a video through the conservative news site, the Independent Journal... 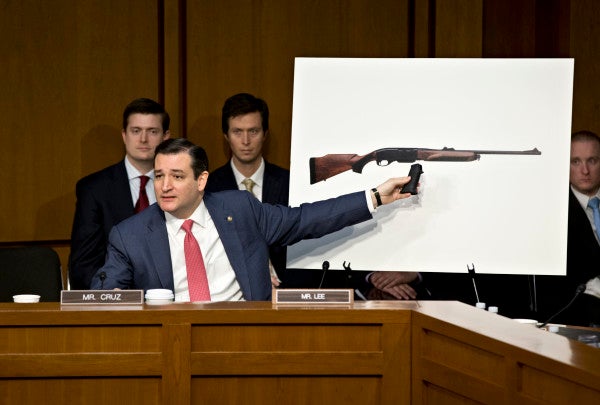 “There are few things I enjoy more than on the weekend cooking breakfast with the family,” the senator says in the video. “Of course, in Texas, we cook bacon a little differently than most folks.”

Then rock music drops, and Cruz, with bacon wrapped around the barrel of a gun, begins laying rounds down range. It’s fun, political red meat in a presidential cycle where gaining attention in a crowded field can be challenging. After emptying a couple of magazines from his weapon, Cruz takes a bite of bacon off the barrel with a fork, looks at the camera and says, “Mmm, machine gun bacon,” and then laughs.

There’s just one problem for the senator — the weapon he cooks his bacon on is not a machine gun. The weapon in question is an AR-15, one of the most popular guns in this country. It’s modeled after the military’s standard-issue battle rifle for the past 40 years, the iconic M16.

Conflating an AR-15 with a machine gun is a common mistake among politicians and media. Cruz’ error underscores a deep misunderstanding about firearms rampant in the media and much of politics, and clashes with a partisan issue he has been vocal about.

The federal law defining firearms — 26 U.S. Code § 5845 — contains the pertinent definition of a machine gun: “The term ‘machinegun’ means any weapon which shoots, is designed to shoot, or can be readily restored to shoot, automatically more than one shot, without manual reloading, by a single function of the trigger.”

That same statute also defines a rifle: “The term ‘rifle’ means a weapon designed or redesigned, made or remade, and intended to be fired from the shoulder and designed or redesigned and made or remade to use the energy of the explosive in a fixed cartridge to fire only a single projectile through a rifled bore for each single pull of the trigger, and shall include any such weapon which may be readily restored to fire a fixed cartridge.”

In the case of the weapon that Cruz is firing, that distinction is clear. The weapon is clearly shoulder fired like a rifle; but more importantly, clearly fires only one shot with each pull of the trigger. You can hear the shots in the video. That just simply is not how a machine gun sounds.

There are fully automatic variants of the M4/M16 or AR-15 model — the standard issue military version includes a three-round burst feature — but it’s pretty evident from the video that that isn’t one of them.

MSNBC reached out to the gun range where Cruz fired the weapon, which reportedly confirmed that the weapon had no automatic fire or burst capability. It was your run-of-the-mill, semi-automatic AR-15.

This may seem like an arbitrary gripe, but it is not. The weapon Cruz is firing, the AR-15, is one of the most common, and yet one of the most misunderstood weapons in America.

Operationally, there is little different from the weapon that Cruz fired in the video and a hunting rifle. But what places the AR-15 at the center of gun control debates and media critique is its appearance. The weapon is all black, with a retractable buttstock, a pistol grip, and a rail system atop and along the weapon’s handguards allowing accessories and optics to be mounted. Its popularity among recreational shooters is often attributed to the consumer’s ability to customize the weapon. Those characteristics have also led some politicians and gun control advocates to seek to ban the weapon, labeling it an assault weapon. AR-15 rifles were used by the killers in two of the most high-profile mass shootings in American history: the movie theater in Aurora, Colorado, and the elementary school in Newtown, Connecticut.

In early 2013, with the country embroiled in an intense debate on gun control following the tragedy at Sandy Hook Elementary School in Newtown, Connecticut, Cruz, then a newly elected senator, was one of those loudest voices lambasting people who didn’t understand the distinction between so-called “assault weapons” and machine guns.

“In my judgement the proposed assault weapons ban is a singularly ineffective piece of legislation,” Cruz said in a January 2013 Senate hearing on gun control.

He cited a recent conversation with a member of his family, who he said asked him, “Why do ordinary people need machine guns?”

“And you know, one of the things that happens in this debate is the phrase ‘assault weapons ban’ gets a lot of people concerned and they assume — much like the phrase ‘military-style weapons’ — that we’re talking about ordinary citizens running around with M16s and Uzis that are fully automatic,” Cruz said. “Fully-automatic machine guns are already functionally illegal. Ordinary citizens cannot own them outside of very, very heavy regulation. This entire discussion does not concern machine guns, and yet I would venture to say a large percentage of Americans do not understand that.”

And he was correct. No matter what you think about the right to bear arms, about gun control, about the right way to address mass shootings, AR-15s — and many of the guns addressed in proposed bans on ‘assault weapons’ — are not machine guns. They’re not machine guns based on the federal definition nor any other reasonably minded definition. They are distinguished and separated from other types of rifles based on purely cosmetic features like rail systems.

Two years ago, Cruz devoted most of his time during a key Senate hearing to illustrate that difference and its importance. Now he picks up an M16 for a campaign stunt and calls it a machine gun. One has to wonder if this will undermine his credibility on gun control issues moving forward. A request for comment from Cruz’ campaign office was not immediately returned.

Check out Cruz cooking bacon with a rifle below.