How Veterans Can Join MMA

Are you a veteran? Do you want to be an MMA fighter? The World Series of Fighting is still searching... 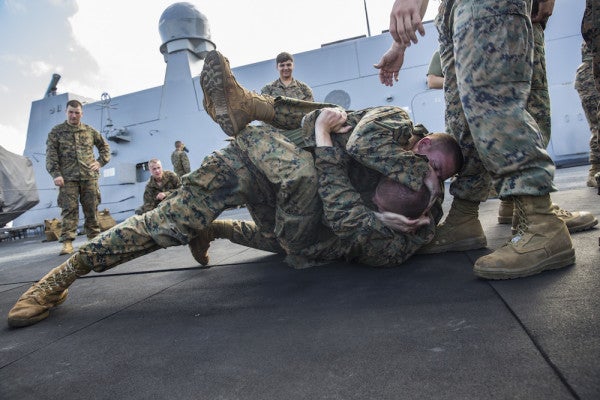 Are you a veteran? Do you want to be an MMA fighter? The World Series of Fighting is still searching for veterans to fill spots for a promotional fight card — no former fighting experience necessary.

So far, roughly 50 veterans have submitted application videos to The World Series of Fighting since the organization’s “Who’s the Toughest?” competition last May. And the final two competitors that make it to a final round will square off on NBC Sports Network over Veterans Day weekend.

Veterans who submit fighting reels showcasing training and sparring are encouraged to share their life stories and military experiences as well.

President of the organization and six-time Muay Thai world champion Ray Sefo is reviewing all applicants to decide who will move forward and who gets cut.

“We are looking forward to embarking on this venture that will allow us to give back to our armed forces that serve our country and protect our freedom,” said Sefo in a statement.

The idea for the competition originated during discussion of a potential reality show about “veterans who found MMA and used MMA as a way to get fit again … and reintegrate after tours,” CEO Carlos Silva told Military Times.

Silva hopes to turn the competition in a biannual event. Winners of the competition can even go on to sign with The World Series of Fighting and have professional MMA careers. He also hopes the program will grow and female veterans will consider applying too.