Editor’s Note: This article by Alison Zeidman was originally published on Fatherly, a digital lifestyle guide for men entering parenthood.... 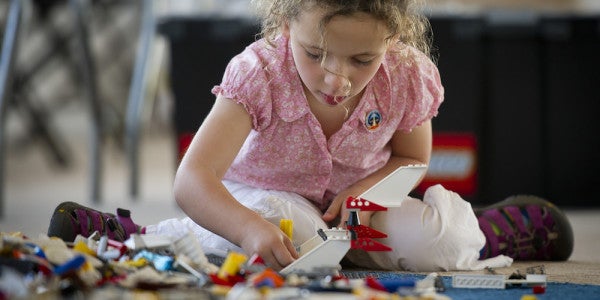 Editor’s Note: This article by Alison Zeidman was originally published on Fatherly, a digital lifestyle guide for men entering parenthood.

A Quora user recently submitted the most important question ever asked on the Internet: “My 9-year-old has been saying for years (really, since age 5) that she wants to become an astronaut. How can I best guide her in pursuing this dream?” Amazingly, Robert Frost (no, not the poet — he’s dead, so that’d be really amazing) responded. Frost is an instructor and flight controller at NASA, and he offered some great advice for the parent of the aspiring Rocket Woman ranging from free NASA games and resources they can explore together now, to the hard truth about what it takes mentally and physically to become an astronaut.

Get your daughter into a club that isn’t full of douchebags. Frost says that the NASA Kids Club, NASA’s hub of online games and activities for kids of all ages, has fun, free resources (like Sydney’s Astro Tracker, Mindy’s Constellation Exploration, and Sean’s Rescue Quest) for pre-pre-astronaut training. The internet … is there anything it can’t do?

Related: Why I taught my daughter how to throw a punch »

There are plenty of men dominating the aeronautics field (and politics, and tech, and finance, and the Oscars … ), but it’s probably more motivating for your daughter to see someone who’s achieved their space dreams who is the same gender.

“If she wants to be an astronaut, learning about the real people can be very inspiring and a great way for you to help her see that although it involves a lot of hard work, it is certainly a feasible path for a young girl. Maybe give her a biography a week to read ,” says Frost. Also, your daughter can continue her education about the pioneering female astronauts, like Sally Ride, Ellen Ochoa, Peggy Whitson, Tracy Caldwell Dyson, and more on the NASA Women of STEM site. (No, there’s no calendar.)

It’s a more expensive route to career inspiration, but NASA offers a Passport to Explore Space program, where kids fill up a “passport” by visiting all 14 NASA visitor centers and Space Shuttle museum exhibits across the country.

Frost does acknowledge that “this could be an expensive endeavor,” and it’s not something his parents could have afforded when he was a kid. But hey, he doesn’t know you. Maybe you’re a traveling consultant just like George Clooney in “Up In The Air.” Make all of those frequent flyer miles (and all those layoffs) work for your little girl.

If you’re the type of parent that can send your kid to 14 NASA visitor centers, make sure the last one is Space Camp. Apparently it’s just like the 1986 movie, but with less Tate Donovan and Joaquin Phoenix — and a wacky robot doesn’t launch you into space.

They can attend camp for either a day or a week-long adventure with the coolest hands-on astronaut experiences. “There are great Space Camp programs at the Kennedy Space Center, in Florida, and at the Marshall Space Flight Center, in Alabama,” says Frost.

Get her on a track. Literally.

To be a rocket jockey it’s just as important to do well in school as it is to develop a strong, high-endurance body. “NASA looks for well rounded applicants,” says Frost. So in addition to good grades, SAT scores, volunteer work, drama club, and awkward dances, she should add athletics to that already long list of high school priorities. Cross-country running is particularly popular among astronauts, so that’s a good place to start. Less popular among astronauts: Shot put.

Astronaut will be her night job.

Astronauts come from a variety of backgrounds, but the three most common are engineer, pilot, and medical doctor — all of which require a ton of school and training. Frost also cautions that no matter what she choses to do, there’s a long road ahead. “She should choose a path that she could live with, because she will have to live with it for a while,” says Frost. “Being an astronaut is not a first career — it is a second career. Her priority should be to excel at that first career, because the astronaut selection panel isn’t impressed by average.”

Jill of all trades.

NASA isn’t just looking for science smarts. It’s important that astronaut candidates are also well-rounded. (And honestly, who wants a kid who wears a space helmet all day?) “Scuba dive, learn to fly, teach classes, volunteer for charities, be a scout leader, travel, learn to speak Russian, engage in competitive sports,” says Frost. “The selection panel is looking for dynamic self-motivated individuals that can learn quickly, handle stress, take orders, and communicate well with the public.” And if she can play violin, that’s just a bonus. Because things get pretty boring on the International Space Station.

This article, “A Guy Who Trains Astronauts On How Your Daughter Can Become One,” originally appeared on Fatherly.