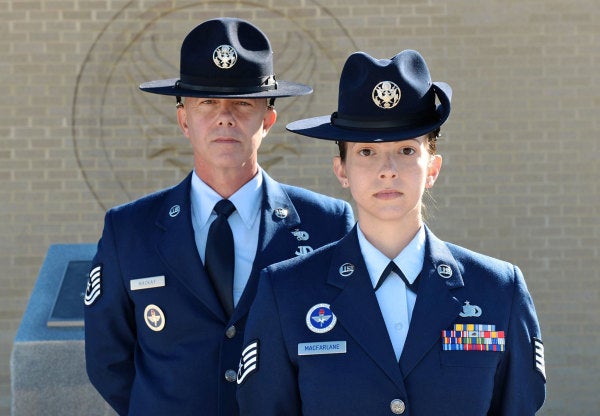 Air Force Staff Sgt. Amanda MacFarlane didn’t just follow in the footsteps of her father, Tech Sgt. James MacKay, she followed him all the way to the same base, Joint Base San Antonio-Lackland, Texas, where they both currently work as military training instructors.

In March, MacFarlane earned her traditional campaign hat upon completion of her instructor training. While many new instructors choose a mentor or father-like figure in their life to present them with the traditional hat, MacFarlane was able to choose her actual father.

“There couldn’t have been anything cooler,” MacFarlane said of that moment in an interview with Task & Purpose.

Even before MacFarlane completed her military training instructor course, she shared a memorable moment with her dad. When MacKay spotted her for the first time among a group of instructor students on base, he wandered over to give her a high-five. Usually eager to stay professional in their interactions, it was a rare public display of their strong father-daughter bond.

MacFarlane’s fellow students, who didn’t know about the family connection, wondered what they had just seen. “It wasn’t embarrassing at all. I’m very proud to work with my dad,” MacFarlane laughed. “It was just kind of funny that I’d forgotten to mention that he was a training instructor.”

“We’re really looking forward to the day where we are in the same squadron so we can compete against each other,” MacKay told Task & Purpose.

With the possibility that MacKay and MacFarlane will become part of the same squadron in the near future, offering them the opportunity to interact directly on a regular basis, they have planned how they will collaborate. MacKay quipped about what he might say to trainees who are acting up: “I don’t want to hear any bellyaching. Let me go get my daughter across the hall and show you what she’s capable of.”

Exuding fatherly pride, he offered another example of what his daughter might say: “You better knock it off or I’m going to go across the hall and get my dad.”

Adding to the rivalry is the fact that MacFarlane completed her instructor schooling with higher distinction in two award categories than her father, although they were both among the top graduates of their classes. They attribute their success to a family tradition of commitment to hard work.

“That is from learning from my dad,” MacFarlane said. “He always stressed hard work and dedication, and go big or go home.”

For his part, MacKay said it is his daughter who brings out the best in him, as he has strived throughout fatherhood to set a good example. He even has another daughter currently serving as an Air Force air traffic controller.

“I guess I always tried to do my best, but once I became a father, it became very important that everything I do I give 100% effort; to lead by example, to say, ‘Hey, you’re not given anything in life. You have to go out and earn it,’” MacKay said.

Their respective groups of trainees also benefit from the relationship. MacKay, who is currently instructing female trainees, shares his daughter’s story to help motivate them in what often seems like a male-dominated profession. When MacFarlane informs her trainees about her father — who, at 52, said he is the Air Force’s oldest military training instructor — they occasionally ask for his experienced perspective on possible Air Force career paths.

MacKay and MacFarlane said they both savor the rare opportunities to share a fist bump or high-five when they pass each other on base with their trainees in tow, or call each other in their free time to catch up. That’s what they’ll be hoping for this Father’s Day, when both will be working, they said.

“I tell everybody I have the ultimate ‘Take Your Daughter to Work Day,’” MacKay said.

For MacFarlane, every day she gets to spend working alongside her dad is special. “He really is an incredible person, and it’s very, very cool to me that I do get to work with him because he is a mentor,” she told Task & Purpose. “His professionalism, his dedication, his positive outlook, his work ethic, the way he always tries to make things better for the people around him, is something that I strive to be.”