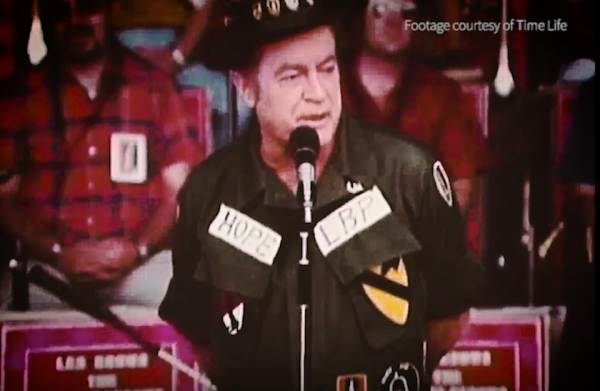 In 1997, President Bill Clinton declared Bob Hope America’s first and only “Honorary Veteran” — a seemingly meaningless title that will likely cause anyone who has ever served in uniform to roll their eyes. That is, unless they’re familiar with Hope’s incredible track record as the most prolific battlefield performer in the history of American warfare.

Hope’s wartime service began in World War II. Between 1941–1945, he logged more than a million miles performing with the USO both in the United States and overseas and came to be known among the troops as “GI Bob.” His commitment to the military would persist throughout nearly every American conflict for the next six decades.

In a column published in 1943, the novelist John Steinbeck wrote of Hope’s wartime work:

When the time for recognition of service to the nation in wartime comes to be considered, Bob Hope should be high on the list. This man drives himself and is driven. It is impossible to see how he can do so much, can cover so much ground, can work so hard, and can be so effective. He works month after month at a pace that would kill most people… And he has been doing this ever since the war started. His energy is boundless.

Hope was already in his 60s by the time the Vietnam War kicked off. But he persevered, helming dozens of USO variety shows for troops in Vietnam and Southeast Asia between 1964–1972, all while shrugging off virulent criticism from the anti-movement, which was exceptionally robust in Hollywood.

Hope’s Vietnam-era variety shows, which featured a rotating cast of whatever celebrities he managed to convince to tag along, were famous for their informality and slightly irreverent tone. Hope’s affinity for the troops was evident in the trench humor that pervaded his comedy sets. He wasn’t a celebrity talking down to a bunch of grunts. He was just one of the guys, joking about everything from strategic blunders to smoking pot.

Below is a short compilation of some of our favorite highlights from Hope’s USO tours in Vietnam, pulled from TIME LIFE’s DVD collection “Bob Hope: Entertaining the Troops,” which will be released on May 10, 2016.