“If you don’t bear witness, then history repeats itself.” 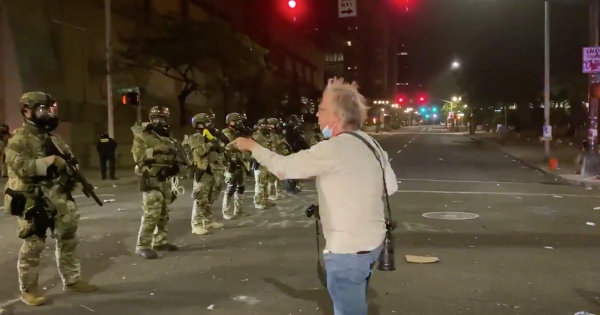 The Vietnam War vet, who is 75, addressed what he called “the untouchable” subject.

“I said what you are never supposed to say,” he recalled Monday. He told the officers: “I am going to give you the most truthful statement I have ever said in my life: There was not one day in the Vietnam War that the United States government did not commit an atrocity against the Vietnamese people.”

Hastie, who lives in Northwest Portland, said he wanted the officers — most in their 20s and 30s he guessed — to know the country had made a tragic mistake in Vietnam and that their own leaders are capable of lies. He said he was holding one Nikon camera and had another slung around his shoulder.

It was the 59th day of continuous protests in Portland. The dynamic on the street escalated about several weeks ago after President Donald Trump ordered federal forces to protect the federal courthouse and federal property downtown.

The officers stared at Hastie as he spoke. One officer wearing camouflage approached him from the side. A now-viral video captured by Andrew Kimmel, a TV and web producer, shows that officer shooting pepper spray directly into Hastie’s face.

Feds pepper sprayed this Vietnam Veteran/photographer right in the face. His name is Mike Hastie. He was an Army medic. #PortlandProtests pic.twitter.com/CLZwKvuTxH

Hastie is seen on the video stopping briefly, removing his eyeglasses and continuing to shout at the officers as they walk away.

“I just kept bearing witness,” he said. “I wasn’t going. My eyes were burning and on fire but I was going to say what I was going to say. It wasn’t going to interfere with what I had to say. There is no rest for the messenger until the message has been delivered. That is my task as a Vietnam veteran who knows the truth about what the United States did.”

He said he was disappointed more than stunned by the officer’s actions. He said the decision to attack him for speaking out felt like a betrayal by the government.

“I instantly knew the cop pepper sprayed me because I was bearing witness,” he said. “He did not like what I was saying. I have come to accept that. I did not feel rage at him.”

Hastie was chief medic for a unit in An Khe, where he served from March 1969 until March 1972. It was a time when he said he witnessed the disintegration of U.S. involvement in Vietnam. When he came home, Hastie questioned the reasons so many U.S. troops were sent to fight there to begin with. His experience prompted him to become a peace activist. He is a member of the local chapter of Veterans for Peace.

When he approached the federal officers, he said he told them that as an Army medic, he too took an oath to defend the U.S. Constitution. But when he got back home, he realized that American troops were “committing atrocities every day.” He said he was talking about the 1968 My Lai massacre and the killings of innocent civilians there but didn’t mention the massacre specifically.

Hastie said he took part in the demonstrations four nights last week. He said he breathed in tear gas and one night he said an impact munition fired in his direction missed.

“I am down there to expose the lies of the U.S. government,” he said. “All you have to do is look at what the administration is doing and what Donald Trump is doing. It’s horrifying.”

“I was gassed four nights in a row, sometimes very heavily,” he said. “I could hardly breathe.”

Hastie said he won’t let the experience deter him. He plans to return to the protests again Monday night.